AMD’s (NASDAQ:AMD) stock jumped more than 8% on Wednesday, which can be attributed to a positive report on global semiconductor sales and the company’s new line of Ryzen CPUs finding some ground among gamers, professional photographers and other users who require high performance CPUs. This is an interesting development for AMD and could help it sustain the momentum that started building early last year. Since April 2016, AMD’s stock price has jumped nearly 5X, and its recent quarterly results suggest that the losses have reduced.

First, the Semiconductor Industry Association announced earlier this week that global semiconductor sales jumped 22.6% year-on-year in May 2017, reaching $31.9 billion. This represented a nearly 1.9% sequential increase over April 2017. However, the key information that stood out was that May’s growth numbers were the highest the industry has seen since Sept 2010. Further, the growth was high across all markets and all device categories, which bodes well for all semiconductor companies including AMD.

Second, a reputed CPU benchmark site recently reported that the share of AMD processors being submitted for performance benchmark testing has jumped significantly this year. The chart below shows historical share split between Intel and AMD based CPUs using PerformanceTest software globally, and is roughly representative of the windows user base. 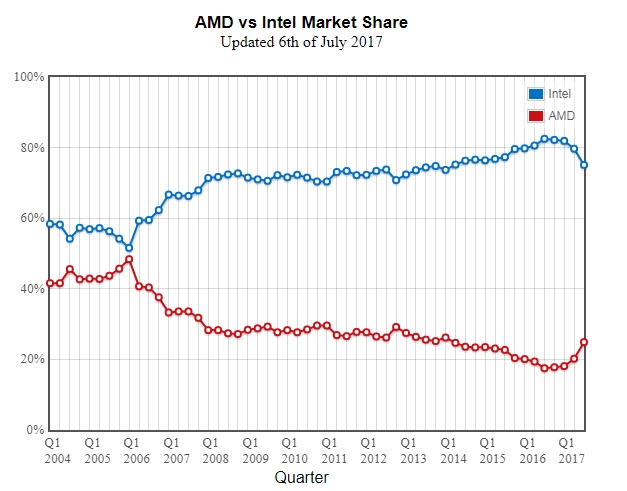 Clearly, this is an important development for AMD considering that its share has been declining consistently for the last several years. The recent spike can be attributed to its launch of Ryzen CPUs, which have shown some promise of delivering competitive power at a lower cost compared to Intel’s. The company expects to launch Ryzen Threadripper CPU aimed at high performance applications this summer, which can potentially help it chip away Intel’s share further.

How Low Can Advanced Micro Devices Stock Go In A Market Crash?

With Bitcoin At $33K, Should You Buy These Crypto Stocks?