The shares of Paycom Software (NYSE: PAYC) and Automatic Data Processing (NASDAQ: ADP) have been observing a downtrend in recent months fairly in-line with broader markets. Both companies offer human capital management services such as payroll processing, tax administration, time & labor management, etc. Interestingly, Paycom stock’s current P/S multiple is at historical lows as observed in April 2020 – indicating a likelihood of strong gains as macroeconomic risks associated with surging oil prices ease. Moreover, investors remain optimistic on ADP, highlighting an overall strength in the HCM industry. Comparing a slew of factors such as historical revenue growth, returns, and risk, Trefis believes that Paycom Software has substantial room for growth in the long run. Our dashboard Automatic Data Processing vs. Paycom Software: Sector Peers, But Paycom Software Is A Better Bet details the fuller picture, parts of which are summarized below.

While both companies have been reporting a comparable net margin in recent years, Paycom has a significantly higher operating cash flow margin than ADP.

As neither of the two companies have a considerable debt on their balance sheet, broader macroeconomic weakness and competitive rivalry are key risks to their businesses. 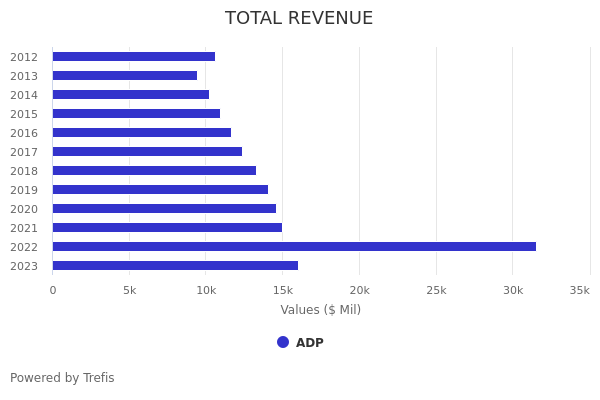 Automatic Data Processing vs. Digital Transformation Stocks: Which Is A Better Investment?

Automatic Data Processing vs. Work From Home Stocks: Which Is A Better Investment?

Automatic Data Processing vs. Ad Tech Stocks: Which Is A Better Investment?

Automatic Data Processing vs. Large Cap Stocks: Which Is A Better Investment?

ADP Stock Down 5%, Should You Buy The Dip?