Alcoa stock (NYSE: AA) dropped more than 10% in just the last one week and currently trades at little less than $37. This drop was in line with an overall bearish sentiment for metals during the week. This was driven by two primary factors – China and the U.S.  China stepped up its fight against soaring commodity prices with a warning of zero tolerance for monopoly and hoarding. China primary aluminum production reached a record high in April 2021, marking a rise of 2.3% m-o-m and 12.4% y-o-y. This was in line with rising demand and expectations of more stimulus measures, which led to a commodity price rally, before Chinese authorities intervened last week. Secondly, U.S. President Biden’s spending plan is apparently being scaled back from $2.25 trillion to $1.7 trillion after facing opposition from Republicans. Most of the cuts will include the most important parts for metals consumption, like broadband, roads, and bridges. These two important factors from the U.S. and China has led to a pull back in commodity prices. Accordingly, global aluminum prices fell 4% in the last one week, which led to Alcoa stock dropping more than 10%.

But will AA stock continue its downward trajectory over the coming weeks, or is a recovery in the stock more likely? According to the Trefis Machine Learning Engine, which identifies trends in a company’s stock price data for the last ten years, returns for AA stock average close to 5% in the next one-month (21 trading days) period after experiencing a 10% decline over the previous one-week (five trading days) period. Notably, though, the stock is likely to outperform the S&P500 over the next one month, with an expected return which would be 3% higher compared to the S&P500.

But how would these numbers change if you are interested in holding AA stock for a shorter or a longer time period? You can test the answer and many other combinations on the Trefis Machine Learning to test AA stock chances of a rise after a fall and vice versa. You can test the chance of recovery over different time intervals of a quarter, month, or even just one day! 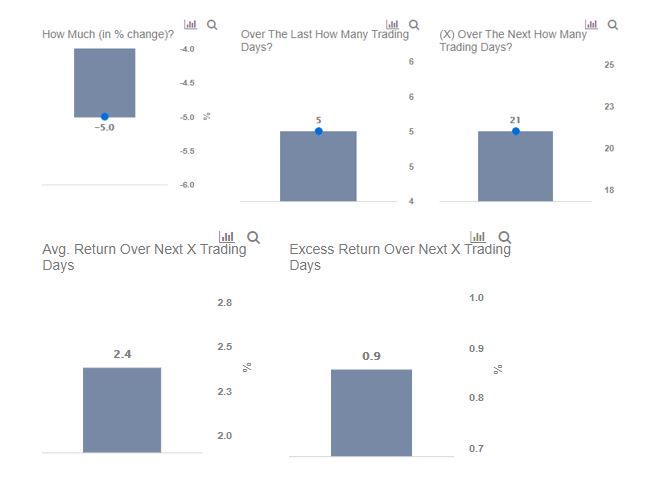 Question 1: Is the average return for Alcoa stock higher after a drop?

Is the average return for Alcoa stock higher over the subsequent month after Case 1 or Case 2?

Try the Trefis machine learning engine above to see for yourself how Alcoa stock is likely to behave after any specific gain or loss over a period.

If you buy and hold Alcoa stock, the expectation is over time the near term fluctuations will cancel out, and the long-term positive trend will favor you – at least if the company is otherwise strong.

For AA stock, the returns over the next N days after a -5% change over the last five trading days is detailed in the table below, along with the returns for the S&P500:

The average return after a rise is generally lower than after a fall as detailed in the previous question. Interestingly, though, if a stock has gained over the last few days, you would do better to avoid short-term bets for most stocks – although AA stock appears to be an exception to this general observation.

AA’s returns over the next N days after a 5% change over the last five trading days is detailed in the table below, along with the returns for the S&P500:

It’s pretty powerful to test the trend for yourself for Alcoa stock by changing the inputs in the charts above.

While AA stock may have moved, 2020 has created many pricing discontinuities which can offer attractive trading opportunities. For example, you’ll be surprised how the stock valuation for Compass Minerals vs Southwest Gas shows a disconnect with their relative operational growth. You can find many such discontinuous pairs here.

With Aluminum Prices On The Decline, What Next For Alcoa?
Visualize Related Companies:
Alcoa

Alcoa vs. Mid Cap Stocks: Which Is A Better Investment?

What’s Behind The Recent Surge In Alcoa Stock?

Alcoa Stock Above $50 – What’s Behind This Surge?

Company Of The Day: Alcoa

What’s Behind The 80% Jump In Alcoa Stock?

What’s Next For Alcoa Stock After Its 50% Rally?

Here’s Why Alcoa Stock Saw 10% Drop In A Month

What’s Behind 14% Rise In Alcoa Stock In A Week?

Should You Hold On To Alcoa Stock After 9% Rally Last Week?