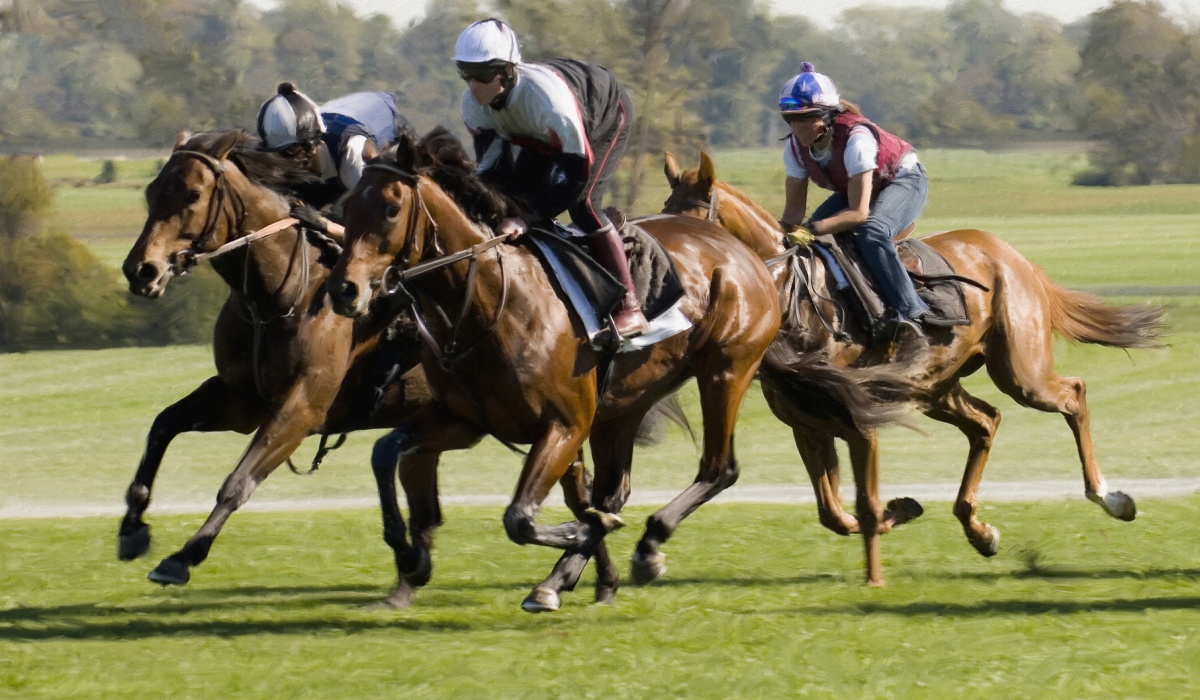 What If A Third Party Candidate Wins A Large Percentage of the Popular Vote?

All Presidential elections feature candidates on the ballot from parties other than the Republicans or Democrats. More often than not, these candidates have no impact on the results. Occasionally, however, they do.

This year’s race is one of those contests.

Taken as an aggregate, third-parties–including the Green and Libertarian parties–pull about 11%* in national polls (as of 9/6). But on a state-by-state basis, ballots cast for these third parties could be enough to shift the popular vote from Clinton to Trump, or from Trump to Clinton. And the winner of the popular vote** wins all that state’s electoral votes.

In this year’s razor-thin-nearly-dead-heat contest, even a handful of electoral votes here or there could mean the difference between “President Trump” or “President Clinton.”

We built a model to quantify that impact.

The more votes that go to other parties, the fewer votes available to the major candidates.  Stands to reason, right?  If the “Third Party Vote” amounts to 10% of the potential electorate, then there will be only 90% left for Trump and Clinton. 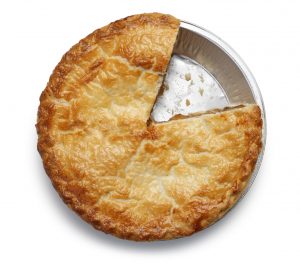 Think of the missing piece as the Third-Party vote.Trump and Clinton have less “pie” to split.

A question pundits often ask is “How will these third parties impact either Trump or Clinton?” A vote for a third party, the thinking goes, is a vote that should have gone to Trump or Clinton, the implication of which is that this vote helps one candidate and hurts the other.

The most recent historical example of this dynamic was the 2000 Presidential Race between George W. Bush and Al Gore in which Gore lost a close election that included third-party candidates Ralph Nader and Pat Buchanan.  Many people believe that Nader syphoned votes away from Gore in hotly contested states, such as Florida (which he lost by 543 total votes).  Lots of people have debated this issue (such as here and here)

You may or may not believe in that analysis or even the underlying assumptions. Maybe those voters would have stayed home without Nader or Buchanan to vote for; maybe they would have found another “protest” candidate. Maybe without those candidates in the race, Gore and Bush would have waged entirely different campaigns.   We’ll never know.

Our Model is Not to Reason Why

Our  model presumes there will be at least some impact on the two major candidates. Why will there be an impact? What are the social, political and emotional drivers behind those third-party votes?  Frankly, we are indifferent from a political perspective.  We just want to quantify the impact, reveal the assumptions behind it and let you  play “what-if” as much as you want.

In our model, we group all other parties under the heading of “Third Party Vote.” 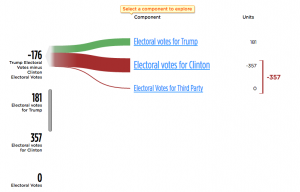 In the center, you see the three arms of the Trefis Interactive Experience.  Click on each arm and the list of states will appear.  The states will be listed from largest tally of electoral votes to smallest.

Trump, in the current model, wins Texas (34 electoral votes) so it is listed first. 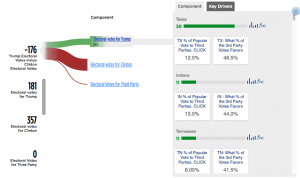 Likewise, under “Electoral Votes for Clinton,” California (55) is listed first. 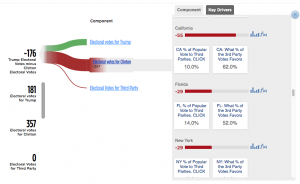 Currently, Third-Party candidates win no states.  A negative sign appears before Clinton’s electoral votes; that’s not a value judgement, just an indication of the plus/minus versus Trump.

Once you open the “arms” of the model, you will see the “Key Drivers.”  Here, there are two: 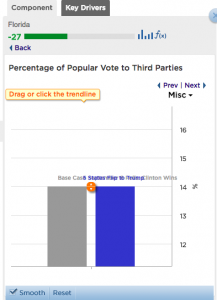 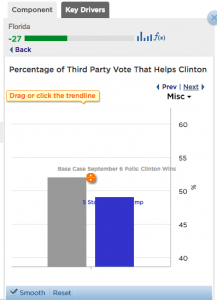 As you click on each, and then manipulate the inputs, you will see how much each driver would have to change in order to have an impact. For instance,

You can type in a number directly.  The visual will update in real-time.  You then can save your scenario.

You can always click “Tour Model” near the top of the page for a self-guided tour.

We’ve kicked started the process with our first “What-if” Scenario: If Seven Close States Flip to Trump, He Would Win.

CORRECTION:  Our original post dated 9/13 contained errors in total electoral votes for each state.  This post (9/16) has been corrected.

*Our polling data come from 270towin.com and reflect the most recent polls and averages of polls that they follow.  Note, our popular vote totals listed on the left are slightly off due to averaging.  All of our “What-if” scenarios will be benchmarked against the best case model, which will be updated with the latest data (updated as of 9/6).

**Maine (2) and Nebraska (3) can split their electoral votes among the candidates. 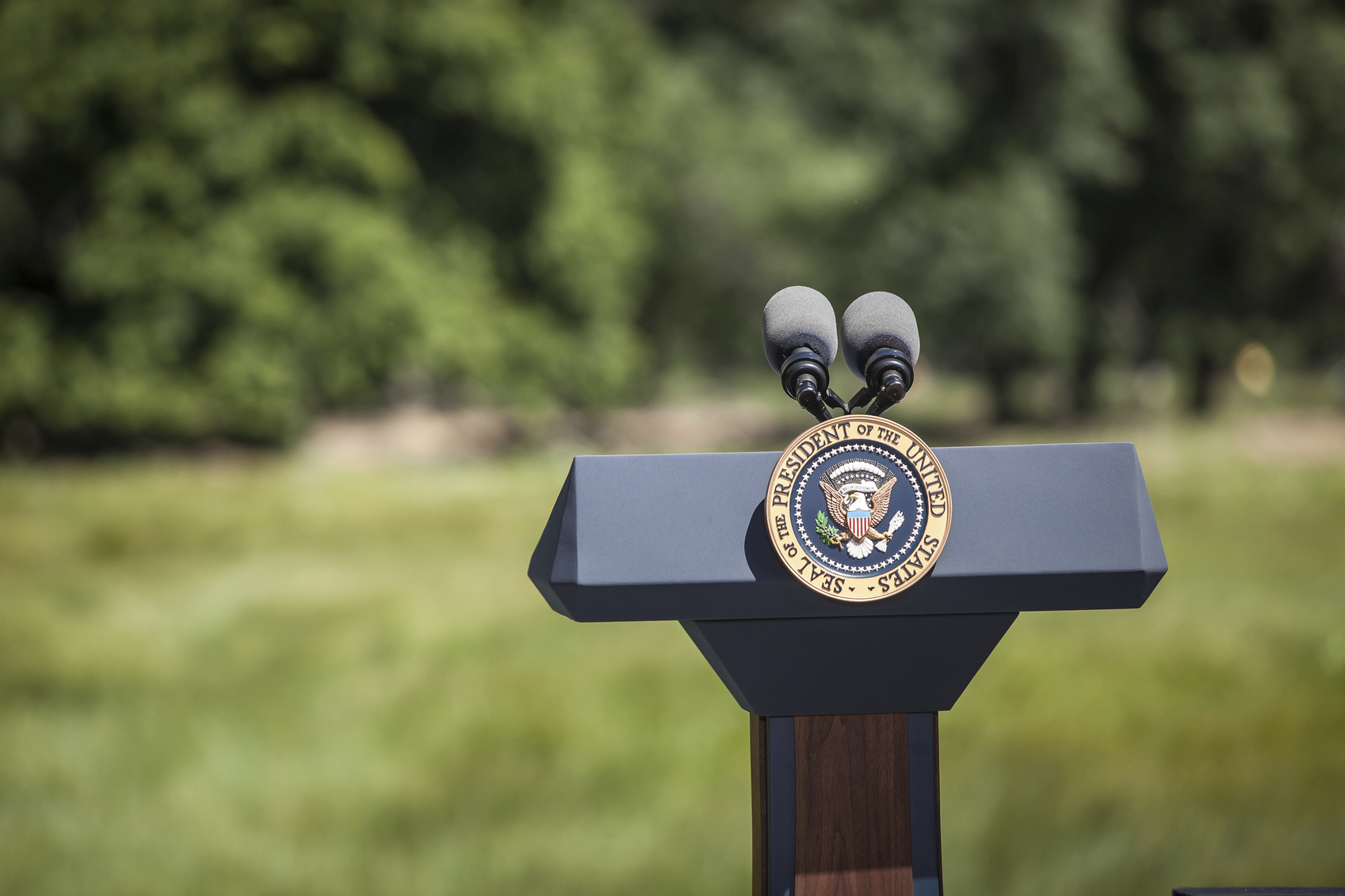