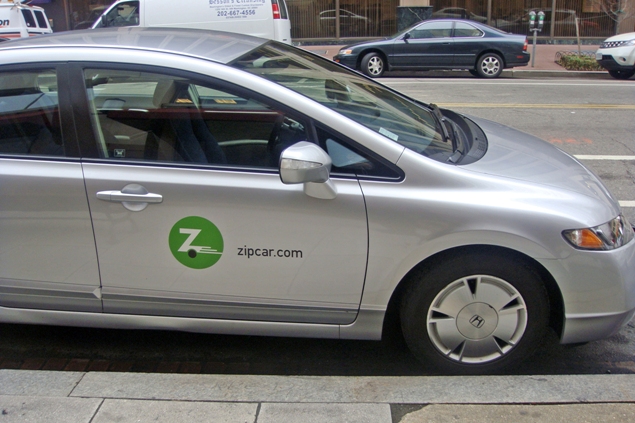 Zipcar (NYSE:ZIP) has thrown a monkey wrench in the traditional car rental business over the last few years. The company currently serves over 600K members with a fleet of over 8K vehicles and is taking a decent chunk of the rental business from traditional rental companies like Hertz (NYSE:HTZ), Avis (NYSE:CAR) and car sharing services like Connect by Hertz, Enterprise’s WeCar, UHaul’s UCarShare and City Car Share. However the membership-based car sharing company now faces new competitors from up and coming low-cost, peer-to-peer (P2P) car sharing services like RelayRides and GetAround.

Caught between rising competition from P2P sharing and big rental companies, Zipcar may suffer slower growth in its membership and usage over time. However we don’t see this impacting valuation in the near term as Zipcar has plenty of growth opportunities in existing and new markets. In fact, we believe these new P2P services could be more complementary and encourage more people to consider car sharing programs over car ownership in dense urban population, which in the end could help Zipcar.

We have a price estimate of $27 for Zipcar, about 60% ahead of the market price.

With growing awareness and popularity, the car sharing market has recently witnessed the arrival of several P2P services like RelayRides, Getaround and Sprideshare and Jolly Wheels.

While RelayRides has received funding from Google and August Capital, Getaround launched in May 2011 and recently won the TechCrunch “Disrupt NYC” award. By investing in smart web interfaces, smartphone apps and car-kits to enable keyless entry, P2P players like RelayRides and GetAround are making credible attempts to match the Zipcar’s accessibility and convenience, with the cost advantage of not needing to purchase or rent a fleet.

For example, RelayRides operates an online marketplace for P2P car sharing. Participating car owners install an OnStar car-kit that leverages tracking of vehicles and allows users to unlock cars using mobile phones. While the car-owner gets to keep 65% of the fee, RelayRides keeps a 15% cut and the remaining 20% goes to insurance costs.

Caught between P2P sharing and big rental companies, Zipcar could face stiff competition as more players enter the fray, which could weigh on its membership and usage growth. So far, Zipcar has seen a healthy trend in annual membership from its North American market, doubling from 200K members in 2008 to 400K in 2010. With an impressive 30% membership growth last quarter, it now exceeds half million members in North America. More than 10 million drivers live within a 10 minutes distance of a Zipcar location, indicating the potential of much greater penetration levels as the popularity of car sharing rises.

Although it faces challenges from emerging P2P players, we believe the consistency and quality of service and reliability of rented fleet still gives Zipcar the edge which is bound to result in membership growth and 90-95% plus retention levels. In well established in markets like Boston, New York, San Francisco and Washington, we expect Zipcar membership to witness rapid growth rates of over 20-25% as it launches into 2-3 new markets every year from 2012.

We also believe that P2P sharing could actually help the overall car sharing market grow, which could ultimately benefit Zipcar. P2P transforms the biggest expense of leasing or owning the vehicles into a variable cost that is only payable when the car is actually being rented. A lower cost structure makes it ideal for sub-urban areas with lower population density and usage demand. This will help expand on potential market size for car-sharing services.

We still believe Zipcar is likely exceed 2 million members in North America by 2018; however to illustrate the sensitivity of this driver on the stock, if membership growth slows and reaches only 1.5 million, there could be a 25% downside to our price estimate.

Avis Buys Zipcar As Competition Heats Up In The U.S. Car Rental Market

Zipcar’s Cash Management Is A Key Driver To Its Outlook

Three Reasons Why Zipcar’s Worth $11

Hertz-Thrifty Deal: What Does It Mean For Zipcar?

Zipcar Tanks As Growth Slows Down

Is Hertz Fleet With Eileo A Big Trouble For Zipcar?