Qualcomm (NASDAQ:QCOM) is expected to announce its Q4 FY13 earnings on November 6. The semiconductor giant has had a record run over the last six quarters, riding the rising global demand for mobile devices to grow revenues year-over-year by an average of 25% each quarter. As a result of this sustained strong top line growth, Qualcomm has increased its FY2013 revenue guidance twice already this year. While mobile devices and chipsets have been growing strongly in terms of unit sales, the ongoing transition to 4G LTE in the developed markets and the rising penetration of smartphones in the emerging markets have had a positive impact on their average selling prices (ASPs) as well. However, Qualcomm’s gross margins have been declining due to an increasing mix of emerging market sales as well as growing competition from rivals such as MediaTek, Nvidia (NASDAQ:NVDA) and Broadcom (NASDAQ:BRCM), falling by an average of  140 basis points y-o-y in each of the last six quarters.

The fourth quarter should see Qualcomm report another strong quarter of revenues, boosted by Apple’s successful launch of the iPhone 5S and 5C, but it will be important to see how its ASP levels and margins are trending in an increasingly competitive market. In the coming quarters, we see Qualcomm continuing to benefit from the 3G to 4G transition in developed markets and the 2G to 3G/4G transition in emerging markets, as it leverages its huge patent portfolio and early LTE lead in chipsets to keep competition at bay. In the longer term, however, there is likely to be increasing pressure on margins and chipset and mobile device ASPs, as the mix shifts towards emerging markets and LTE competition catches up. Our $72 price estimate for Qualcomm is about in line with the current market price.

The smartphone market has shown significant growth in recent years. Gartner estimates that almost 700 million smartphones were shipped worldwide last year, a growth rate of more than 43% over 2011. The consumer shift to smartphones continues to be strong despite some lingering macroeconomic uncertainty, and it is likely that the momentum will push the smartphone market closer to the 1 billion mark by the end of 2013. At the same time, the growth of other mobile devices such as tablets is picking up serious momentum. IDC estimates that tablet sales grew by over 78% in 2012 to 128 million units, and will continue to grow rapidly for the next few years to reach about 350 million unit sales by the end of 2017. [1]

Most of the future smartphone volume growth is likely to come from emerging markets such as China and India, where 3G/4G penetration is still very low  and carriers are intent on driving data usage through smartphones. According to IDC, more than 210 million smartphones were sold in China last year, giving the country a share of almost 30% of the world market. With a billion-strong mobile subscriber base and carriers increasingly trying to transition their 2G bases to 3G, China presents a huge opportunity for Qualcomm, to not only gain from its chipset sales, but also earn a steady stream of licensing revenues (see Qualcomm Introduces Three New Entry-Level Chipsets To Target Emerging Markets).

The biggest opportunity for Qualcomm there is China Mobile, which is planning to transition from a non-industry TD-SCDMA standard to 4G LTE. China Mobile is not only China’s largest wireless carrier, but also the world’s, with a subscriber base of almost 750 million that overshadows Verizon’s by almost seven times. Given Qualcomm’s early lead in LTE and its relatively low presence in the earlier standard TD-SCDMA, China’s transition to LTE should not only give it a wider base from which it can collect royalties, but also to further its chipset market share.

However, an increasing mix of mobile phones sold in emerging markets will cause mobile ASPs to fall, limiting the upside to licensing fees from such a scenario. We currently estimate that the 2G to 3G/4G transition will see 3G/4G penetration of mobile devices worldwide grow from about 50% currently to about 65% by the end of our forecast period. However, the increasing adoption of smartphones in emerging markets, buoyed by the growing number of low-end affordable smartphone options, could see 3G/4G penetration increase to about 80%, by the end of our forecast period. Such a scenario would add a further 10% upside to our price estimate. However, if mobile ASPs fall to about $150 from the current level of $220 simultaneously due to the growing emerging market mix, the upside to our price estimate would be limited to only about 6%.

As for 4G LTE, this high-speed technology is being widely promoted in the U.S., Japan and South Korea. Qualcomm has taken a big early lead in this market, having come to market first with its LTE-capable baseband chipsets. Of the 47 million LTE-capable chipsets that were shipped last year, Qualcomm accounted for nearly 86% of the market. Q1 2013 saw Qualcomm ship almost 97% of all LTE baseband chipsets in the industry. While competitors are only now bringing their first LTE basebands to market, Qualcomm’s chipsets are in their third-generation already. This big early lead is a testament to the company’s superiority in 3G/4G connectivity solutions as well as its ability to integrate these baseband capabilities onto a single app processor chip, both of which have helped it perform really well in the smartphone market so far.

However, competition in the LTE market is slowly growing, with Samsung and Nvidia having made their Exynos and Tegra lines LTE-compatible, and Broadcom is expected to make a similar announcement soon, following its recent deal with Renesas. Some primarily emerging market players such as MediaTek are also entering the fray with plans to launch their LTE solutions in the coming months. By the end of 2014, we expect many of these rivals to have integrated LTE modems on their app processors as well, further narrowing the technology gap with Qualcomm.

We expect Qualcomm’s technological superiority to help it hold fort in the near term, as could be seen in Samsung’s recent decision to launch the Galaxy S4 with Qualcomm’s chipsets for LTE markets despite having an LTE-compatible chipset of its own. In the longer term, Qualcomm’s huge initial market share is likely to decline due to increasing competition, but the overall growth in the LTE market could help more than offset that impact. 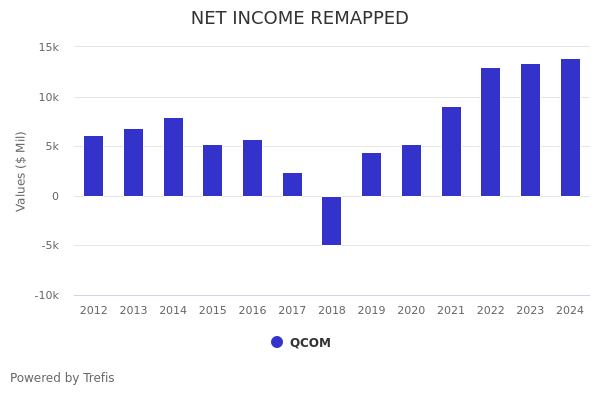 What Drove the 43% Net Income Change for Qualcomm in FY2022?

Better Bet Than QCOM Stock: Pay Less Than Qualcomm To Get More From Stock CLF

Better Bet Than QCOM Stock: Pay Less Than Qualcomm To Get More From S&P 500 Stock NRG