Liquefied Natural Gas, also popularly known as LNG, has been the silent winner in the ongoing commodity slump. Due to the increased focus on the use of cleaner fuels, the demand for LNG has grown considerably over the last few years. To put things in perspective, the global LNG market has grown at roughly 6% per annum over the last 15 years and stood at around 250 million tons per annum (mtpa) in 2015. Further, due to the ease of transportation and safety involved, LNG has emerged as a cost-competitive and cleaner fuel, especially for shipping heavy-duty road transport. Thus, this demand is expected to almost double to approximately 500 mtpa by the end of 2030. Owing to the huge growth potential of these markets, integrated oil and gas giants, such as Royal Dutch Shell (NYSE:RDS.A), have been focusing on building their LNG capacities. In this note, we discuss Shell’s presence in the LNG market and its plans to further penetrate into the market.

Shell : A Pioneer In The LNG Industry

Shell has been in the LNG market for more than 50 years. The Netherlands-based company was closely involved in the first ever commercial LNG liquefaction plant that was delivered in Algeria in 1964, and shipped the first commercial cargo from Algeria to the UK in the same year. Today, the Netherlands-based company is one of the world’s largest LNG shipping operators, managing and operating more than 40 carriers worldwide. The company’s trading division buys and sells LNG to and from Shell, its partners and third parties, depending upon the changing energy needs of its customers.

The company is involved at every stage of the LNG value chain, starting from finding the fields and extracting gas, liquefying gas and shipping it, to turning the LNG back into gas and distributing it to customers. Shell has LNG supply projects, either in operation or under construction, in 10 countries. The integrated company has major interests in two regasification plants (Dragon and Hazira) and long-term access to capacity in several others in Europe, the Middle East, North America and Asia. 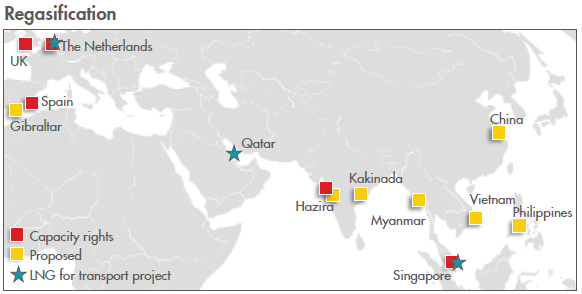 Over the last few years, Shell has considered its Integrated Gas operations, which include its LNG operations, as a growth opportunity. However, in its latest Capital Market Day, the company highlighted that the Integrated Gas division is no longer a growth priority, but instead is a cash engine for the company. To further its strategy, Shell completed the acquisition of the BG Group in February of this year, which has strengthened Shell’s position as the largest independent producer and marketer of LNG. With the completion of the deal, the company has roughly $90 billion of capital employed in this division, which is nearly one-third of its total capital employed. Of this, almost $20 billion is related to projects under construction and are not contributing to the company’s earnings or cash flows yet. Thus, there is a large pipeline of LNG projects that will enable the oil and gas major to maintain its strong legacy of operational excellence and deliver robust cash flows and returns for its shareholders. 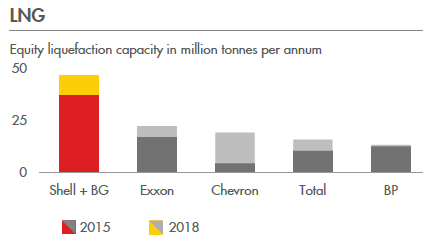 Post the transaction, Shell holds the highest liquefaction capacity in the industry, surpassing its closest competitors, Exxon and BP. Fortunately for Shell, the assets that it acquired from the BG Group are delivering much higher value than it had expected. For instance, the company expects to generate the estimated synergies from the deal in 2017, prior to its target of 2018. Also, it has revised the anticipated synergies in 2018 from $3.5 billion to $4.5 billion. Hence, Shell’s strategy to further penetrate into the LNG market is reaping good returns.

Operationally, just like BG, Shell too is an aggregator, whereby, apart from its own liquefaction volumes, it buys third party LNG under long-term contracts, and markets it to its customers globally. It also purchases and sells spot LNG volumes to further optimize its business through logistic or market optimizations. Post the consolidation, majority of the combined LNG volumes are being sold on long-term contracts, ranging from 2 to 20 years, and are linked to oil prices and gas hub prices, while some portion of the volumes are being sold at short-term spot, which are mostly offset by spot purchases. Since a large portion of Shell’s LNG volumes are contracted for long-term, it is somewhat shielded against the softness in the commodity markets. 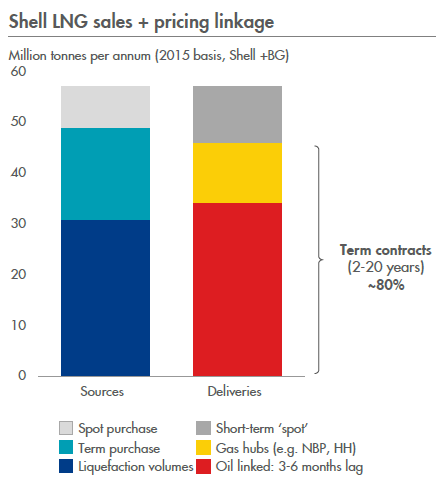 Going forward, Shell will continue to focus on growing its LNG operations organically by exploring new and innovative LNG projects, as well as inorganically through strategic mergers and acquisitions.