The plunge in commodity prices over the last two years has left the entire oil and gas industry upended. Royal Dutch Shell (NYSE:RDSA), an independent oil and gas company, witnessed a sharp drop in its revenues as well as profitability, and lost almost one-third of its market value due to the oil slump that began in July 2014. However, unlike some of its competitors, the company has managed to remain afloat and continues to fight the commodity cycle tooth and nail. Apart from reducing its capital spending by close to 20%, the European company has been aggressively divesting its core as well as non-core assets to finance its future projects. Further, the oil and gas producer has been proactively reducing its operating costs and investing in new high-margin projects to maintain their operating margins in these turbulent market conditions. In this note, we aim to discuss how Shell plans to weather the ongoing commodity down cycle.

Firstly, Shell has laid down a divestment program, which is expected to be an integral element of its portfolio improvement plan. Under the program, the company plans to sell assets worth $30 billion between 2016 and 2018 in order to reduce its debt obligations and finance its capital spending during the period. This will enable the company to simplify its portfolio and focus on building its core operations. The assets that have been earmarked for sale include up to 10% of Shell’s oil and gas production, several country positions, and selected midstream and downstream assets. While the company expects to sign sales agreements worth $6-$8 billion within 2016, it is not in a hurry to finalize deals that do not generate value for its shareholders. 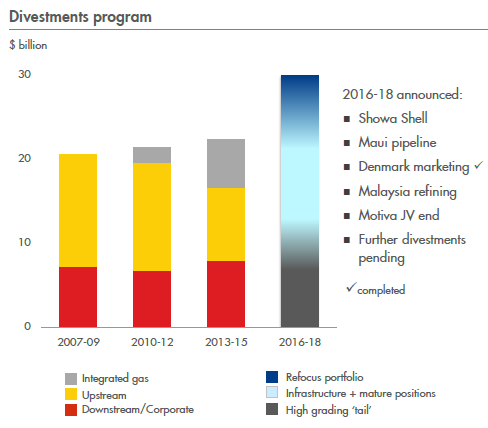 Secondly, the weak commodity prices have driven down Shell’s price realizations over the last few quarters. This has forced the Netherlands-based company to pull back its exploration and production budget and conserve cash flows to survive the ongoing down cycle. Consequently, Shell plans to cut its capital expenditure from $36 billion in 2015 to $29 billion in 2016, a decline of almost 20% on a year-on-year basis. Further, it targets to keep its capital budget in the range of $25-$30 billion annually in the remaining years of this decade, as the company focuses on improving its capital efficiency and developing more profitable projects. In addition, the management has indicated that it will not shy away from further reducing its capital allocation by deferring or cancelling future projects, in case oil prices continue to remain depressed.

Thirdly, much like its peers, Shell has also adopted measures to control its operating costs and improve its production efficiency. The company has already managed to cut its operating costs by $4 billion, or roughly 10% in 2015, and is on track to achieve further 10% reduction in its costs in 2016. This notable drop in costs is attributable to the cost synergies derived from the BG Group (LON:BG) deal and the in-house efforts of the company. Besides this, the company is also working towards bringing down its personnel costs, which account for roughly 40% of its total operating costs.

Finally, the world’s largest producer of LNG is undertaking a number of new growth projects that can support its production growth while improving its profitability. The Gulf of Mexico and Brazil are considered to be the key markets with deepwater drilling opportunities for the company. Shell estimates that the projects that have been added to the company’s portfolio since 2014 will produce around 1 million barrels per day by 2018. Also, these projects are expected to deliver higher margins compared to the company’s existing projects. Hence, the company is optimistic about the upside from these new projects in a strong price environment. 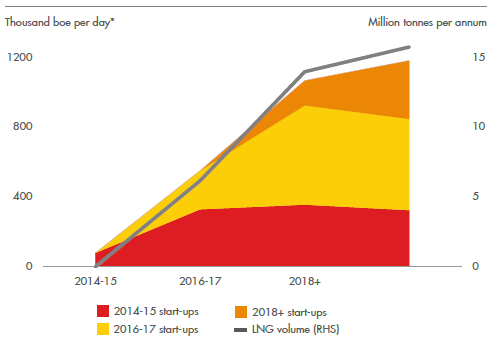 In a nutshell, we believe that Shell has been proactively working towards reshaping its portfolio and has devised a strong strategy to sustain itself through the ongoing commodity downturn.