Trina Solar (NYSE:TSL), the world’s largest solar panel manufacturer, reported robust growth for Q2 2016, driven by expanding module shipments (+62% y-o-y) and declining manufacturing costs (blended cost per watt down 6%). Although Trina beat analyst expectations on both revenues and earnings, the stock remained relatively flat at about $10.50 in Tuesday’s trading, as it is likely capped by the firm’s recent agreement to go private private via an all-cash transaction ($11.60 per share) in Q1’17 (related: Going Private Is A Good Deal For Trina Solar Shareholders). Below, we provide some of the key takeaways from the earnings release. 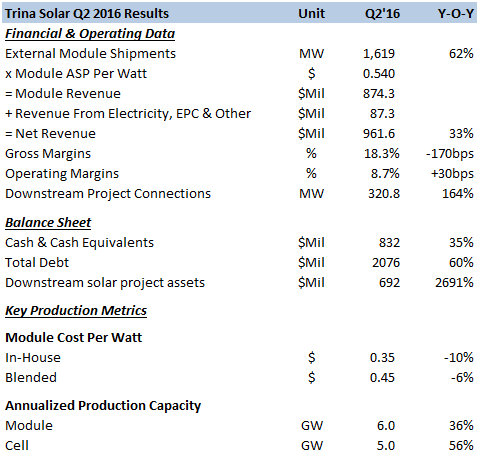 Trina’s module shipments rose 62% year-over-year to about 1.6 GW, driven primarily by demand from China, as project developers in the country doubled down on completions ahead of an adjustment to the feed-in-tariff structure in the country in late June. Shipments to the United States also grew by about 29% year-over-year, as the firm ramped up production from its Thailand cell and module facility, which does not face tariff restrictions in the United States.

In-house manufacturing costs declined by about 10% year-over-year amid manufacturing and efficiency improvements, while blended costs-per-watt declined at a slower pace year-over-year, as the company continued to source a portion of modules from third parties. However, margins trended lower on a year-over-year basis, as the average selling prices fell at a faster rate compared to costs. The firm is projecting mid-teens margins for the second half, as ASPs continue to decline amid weaker panel demand from China and stronger global supply.

Trina’s progress in monetizing its downstream assets has been somewhat weak, with just about 11.2 MW sold during Q2. Moreover, the value of the downstream solar assets held on Trina’s balance sheet has risen from $25 million in Q2’15 to $692 million in Q2’16, likely driven by an increase in the firm’s build-to-sell project assets in China. The number has also expanded by about 12% sequentially. The company’s ability to sell its growing project portfolio at acceptable prices will be a key factor to watch in the near-term, given the declining trend in global solar PPA prices and the economic headwinds in China.

Do PERC Panels Pose A Threat To First Solar And SunPower?

How Will The Slowdown In Chinese Installations Impact Trina Solar’s Q3 Results?

Why The Solar Industry Could Face Headwinds In The Near Term

Going Private Is A Good Deal For Trina Solar Shareholders

Why We Cut Our Price Estimate For Trina Solar To $10

Why Are We Bullish On Trina Solar?

How Is Trina Solar’s Revenue Mix Expected To Change Over The Next 5 Years?

How Has Trina Solar’s Revenue Mix Changed Over The Last 5 Years?