Royal Dutch Shell (NYSE:RDSA), one of the world’s largest integrated energy companies, has been feeling the pinch on its profitability because of the commodity down cycle over the last two years. Due to the plummeting commodity prices, the Netherlands-based company’s upstream division has been suffering a steep decline in its revenues as well as profits. Hence, like most of the other integrated companies, Shell has been relying on its downstream operations to mitigate the impact of the slide in its upstream operations. Consequently, the company has categorized its Chemicals division, an integral part of its downstream operations, as its growth priority over the next few years. In this note, we discuss the growth potential of the chemical markets, Shell’s positioning in this market, and its strategy going forward.

Shell’s Presence In The Chemical Industry

Shell entered the chemicals industry in 1929 through a partnership in the Netherlands, to manufacture ammonia from coke-oven gas. Since then, the company has developed several manufacturing processes, proprietary technologies, and catalysts that have not only changed the face of the industry but have enabled it to compete strongly with the growing competition. In fact, Shell is among the few companies that offer a range of natural gas-based fluids and solvents to the chemicals industry worldwide. Its plants produce a range of base and intermediate chemicals and products that are used in items, ranging from clothing and cars to detergents and bicycle helmets. 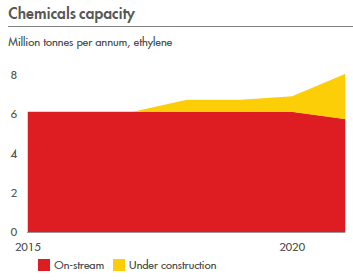 Particularly over the last decade, Shell has integrated most of its chemical sites, and has focused on its core competences. Due to these constant efforts, the company holds a competitive edge over its peers in chemical feedstocks. An advantage in chemical feedstocks, coupled with a strong product portfolio and proprietary technology, has enabled Shell to deliver consistent margins even in the commodity downturn. 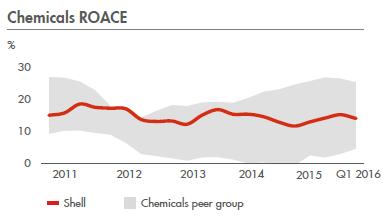 Chemicals Demand Outlook
Petrochemicals is the fastest growing hydrocarbon demand sector, as it contributes in the development of the the building blocks that are necessary for a comfortable urban life. Further, with the increased emphasis on the use of environmentally friendly products, petrochemicals have emerged as way to reduce the carbon footprint globally. Over the last decade, the demand for petrochemicals expanded at a annual growth rate of 3.7%, from almost 210 million metric tons in 2005 to roughly 300 million metric tons in 2015.
With an assumption of continued economic growth worldwide, the market experts forecast the demand for petrochemicals to continue to grow at a rate of more than 3.5% over the next five years and exceed 350 million metric tons by the end of this decade. 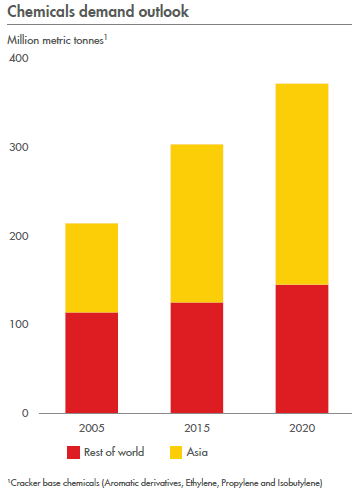 Shell has over 85 years of experience in the chemicals industry and has a strong, yet balanced product portfolio. Given the huge growth potential offered by the petrochemical industry, the oil and gas player plans to continue investing in its existing sites to expand its capacity, improve efficiency and integration, and to strengthen its feedstock sources. A majority of this expansion will be driven by Shell’s operations in North America and growth in the Chinese demand.

In the US, Shell has announced its plans to invest in its petrochemicals project in Pennsylvania. This site is expected to generate 1.5 million tons of ethylene every year. Also, it will use ethane from the lowest-cost shale gas basin in North America to produce polyethylene, and will be one of most cost competitive polyethylene producer in the US. The construction of this project will start in 2017, while its commercial production is expected to begin early in the next decade. 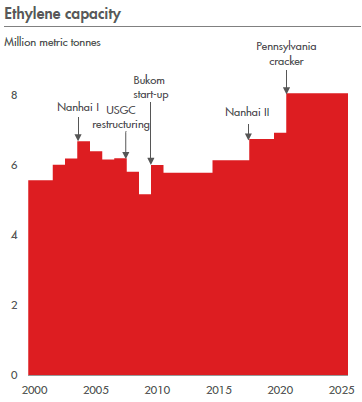 In the Gulf Coast, the company has decided to expand its chemical presence at the manufacturing site in Geismar, Louisiana, making the site the largest Alpha Olefins producer in the world. In China, Shell, along with China National Offshore Oil Corporation (CNOOC), has finalized an investment decision to expand the existing petrochemical complex in the first quarter of this year. The project is likely to enhance the current ethylene capacity by more than 1 million tons per year, which is almost double the existing capacity. As a result, the site will become the largest petrochemicals site in China, and will offer a platform for continued future growth for Shell. The projects in the Gulf Coast and China have the potential to add 8 million tons per year to Shell’s existing capacity by the beginning of the next decade. 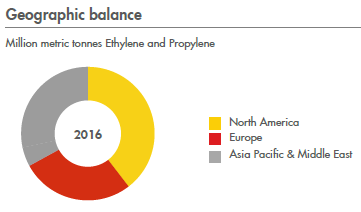 Apart from these projects, the company aims to secure new integrated growth projects and develop new and advanced technologies to convert gas into chemicals, to tap into the growing demand for petrochemicals. Shell will continue to leverage its competitive advantage to optimize its returns for its shareholders. For this, the company has set aside a capital spending budget of $3 billion for 2016 and $3-$4 billion for the next couple of years. With this investment, the company expects to generate free cash flows of greater than $5 billion annually and a return of around 10% on its capital employed in the 2019-2021 time frame.

Thus, we believe that a strong pipeline of projects and growing global demand is likely to support Shell’s growth in the petrochemical segment. However, an adequate amount of capital expenditure and extraordinary project delivery will play a crucial role in Shell achieving its growth target.