Netflix stock (NASDAQ: NFLX) went up more than 4% in the last one week and currently trades at $613 per share, which is an all-time high for the streaming giant. The stock went up recently after some positive announcements by its Chief Content Officer Ted Sarandos. He said Squid Game – a Korean language survival story launched recently – has already blown past Lupin and Money Heist as the most popular foreign language Netflix original. Also, it could become the most popular series the company has produced till date. The most-watched TV show by hours in the first 28 days was Bridgerton season one, which had 625 million viewing hours. The show had eight episodes, which suggests average viewership —in just the first four weeks—of about 78 million per episode. To put things in perspective, the most recent Super Bowl had under 92 million viewers.

Netflix also announced an agreement to acquire videogame company Night School Studio to provide games from Night School and other developers to subscribers without any additional charge, and without ads or in-game purchases. This all suggests that recent concerns over light subscriber growth in the first half of 2021 tied to a content slate that had been impaired by production limitations imposed by the pandemic, are likely to be transitory in nature. For Q3 2021, Netflix is projecting 3.5 million net subscriber additions, which would be up from 1.5 million in Q2 2021.  But will Netflix’s stock continue its upward trajectory over the coming weeks, or is a correction in the stock more likely?

According to the Trefis Machine Learning Engine, which identifies trends in a company’s stock price data for the last ten years, returns for NFLX stock are likely to be almost 4% in the next one-month (21 trading days) period after experiencing a 4.3% rise over the previous one-week (five trading days) period. Also, there is a 60% chance of the stock giving positive returns over the next one month. But how would these numbers change if you are interested in holding NFLX stock for a shorter or a longer time period? You can test the answer and many other combinations on the Trefis Machine Learning Engine to test Netflix stock price forecast after a rise or fall. You can test the chance of recovery over different time intervals of a quarter, month, or even just one day! For additional details about Netflix historical returns and return comparison to peers, see Netflix (NFLX) Stock Return. 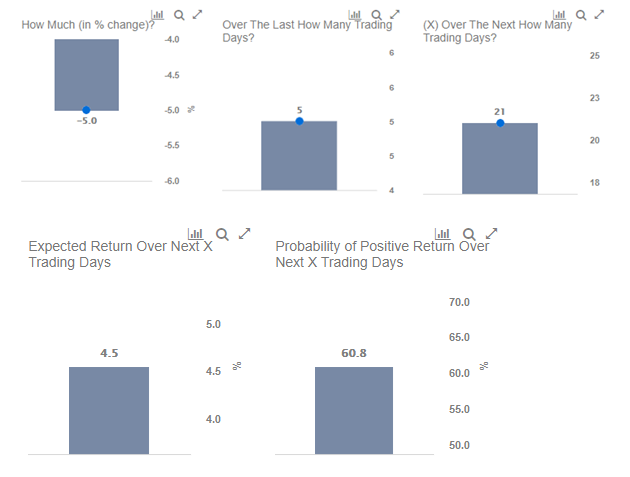 Q1: Is the price forecast for Netflix stock higher after a drop?

Case 2: Netflix stock rises by 5% or more in a week

Is the price forecast for Netflix stock higher over the subsequent month after Case 1 or Case 2?

Try the Trefis machine learning engine above to see for yourself how the forecast for Netflix stock is likely to changes after any specific gain or loss over a period.

If you buy and hold Netflix stock, the expectation is over time the near-term fluctuations will cancel out, and the long-term positive trend will favor you – at least if the company is otherwise strong.

For NFLX stock, the returns over the next N days after a -5% change over the last five trading days is detailed in the table below, along with the returns for the S&P500:

Q3: What about the average return after a rise if you wait for a while?

The average return after a rise is understandably lower than after a fall as detailed in the previous question. Interestingly, though, if a stock has gained over the last few days, you would do better to avoid short-term bets. More specifically, after the S&P500 rises 5% over five days, the average return over the next seven trading days is negative. You can expect a nominal gain only if you remain invested for at least two weeks (10 trading days). But this average return figure swells to 11.7% over a period of a year (252 trading days).

It’s pretty powerful to test the trend for yourself for Netflix stock. It would be great to hear how the results compare versus your own intuition.

Netflix vs. Large Cap Stocks: Which Is A Better Investment?

Netflix vs. Ad Tech Stocks: Which Is A Better Investment?

Netflix vs. Sports Stocks: Which Is A Better Investment?