The shares of Keurig Dr Pepper (NYSE: KDP) currently trade at $36 per share, which is 25% above its pre-Covid levels. On the other hand, shares of PepsiCo (NASDAQ: PEP) trade at $163 per share currently, which is 15% above its pre-Covid level. Does that make PEP a better stock pick compared to KDP? Both companies belong to the food and beverage industry – providing packaged beverages, concentrates, etc., while PepsiCo also provides food and snacks products. While PepsiCo is a much bigger and more geographically diversified company, KDP’s higher valuation multiple reflects a much better revenue growth over recent years and product mix. KDP is better placed as most of its sales come from brewing systems and bottled beverages, the demand for which is increasing as people are moving away from carbonated drinks. We compare a slew of factors such as historical revenue growth, returns and valuation multiple in an interactive dashboard analysis, Keurig Dr Pepper vs PepsiCo: Industry Peers; Which Stock Is A Better Bet?

Though PepsiCo seems to have better profit growth recently, KDP is likely to exhibit strong revenue growth and better debt management going forward. What benefits Keurig Dr Pepper is also its product mix. KDP continues to have an edge over rivals Coca-Cola and PepsiCo, as its coffee segment continues to see growth with people moving away from carbonated drinks and replacing the same with beverages like coffee. This growth is set to continue as working at home by millions of people is benefiting the company’s direct and licensed K-Cup coffee sales. 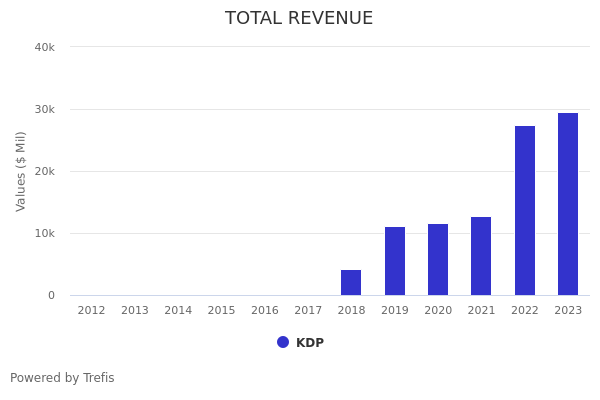 Why Keurig Dr Pepper Stock Moved: KDP Stock Has Gained 34% Since 2019 Primarily Due To Favorable Change In Revenues

What To Expect From Keurig Dr Pepper’s Q3?

What To Expect From Keurig Dr Pepper’s Q2?

Is Keurig Dr Pepper A Better Pick Over This Food And Beverage Giant?

How Does Keurig Dr Pepper Look Compared To Its Rivals?

Which Stocks Can Offer Better Returns Compared To Yum! Brands?

Is Keurig Dr Pepper Stock Undervalued Even After An 80% Jump?