Despite a higher valuation, we think that Home Depot stock (NYSE: HD) currently is a better pick compared to Lowe’s stock (NYSE: LOW), given its better revenue and margins growth. Home Depot trades at about 2.5x trailing revenues, compared to 1.5x for Lowe’s. That said, both home improvement retailers saw increased demand during the pandemic, and the online space and the robust housing market were the key drivers of this growth. However, Home Depot’s comparable sales growth of 15.8% in the fiscal first quarter of 2021, compared to only 9.8% growth for Lowe’s during the same period. And, there is more to this comparison. Let’s step back to look at the fuller picture of the relative valuation of the two companies by looking at historical revenue growth as well as operating margin growth. Our dashboard Home Depot vs Lowe’s: Industry Peers: Which Stock Is A Better Bet? has more details on this. Parts of the analysis are summarized below.

In addition, Home Depot’s sales per square foot grew 15.8% y-o-y in the fiscal first half of 2021 as compared to a similar 16% y-o-y growth in the same period a year ago. On the other hand, Lowe’s saw this metric grow 11% y-o-y in the fiscal first half of 2021 vs. a 22% growth in the previous year. By and large, Home Depot has been able to retain the revenues per square foot, rather than generating revenues from the new square footage. All this indicating that Home Depot’s existing store network is being effectively used to drive its revenues. Our Home Depot Revenues and Lowe’s Revenues dashboards provide more insight into the companies’ revenues.

Similar to the pattern seen in revenue growth, Home Depot’s operating margin of 15% over the last twelve-month period is much better than 10% for Lowe’s. Even if we were to look at the last three fiscal year change in operating margin, Home Depot’s 10% figure is better than Lowe’s 7% change. However, we expect margins for both companies to face some headwinds in the near term, given the inflationary pressure and supply chain restrictions.

Now that over half of the U.S. population is fully vaccinated against Covid-19 and with overall economic activity picking up – the demand for home improvement products is likely to slow down as compared to the surge seen over the last year – as the crisis winds down. However, Covid-19 is proving more difficult to contain than initially thought, due to the spread of more contagious virus variants. That said, the coronavirus pandemic has also made homeowning more attractive since people spend more time at their homes. As a result, housing prices are soaring since the onset of the pandemic, and that has the potential to benefit both Home Depot and Lowe’s.

If we were to look to compare the financial risk, Home Depot’s 10% debt as a percentage of its equity is lower than 16% for Lowe’s, but Home Depot’s 7% cash as a percentage of assets is also lower than the 13% figure for Lowe’s, implying that HD has better debt but a worse cash position as compared to Lowe’s. As such, Lowe’s does not appear to be at higher risk when compared to Home Depot. But still, the net advantage moves back to Home Depot based on its higher revenue growth and better operating income growth in the past and the current scenario as compared to Lowe’s, despite a higher valuation for Home Depot.

HD stock does trade at a premium to LOW stock, but that premium is justified considering the better operating margin performance at Home Depot. In fact, going by our Home Depot Valuation of $348 per share, there is an upside potential of nearly 3% from the current levels of around $337.

While HD stock may currently be a better pick as compared to Lowe’s, there are several stocks in S&P500 that look like a Better Bet Than HD stock. Also, Home Depot Peer Comparisons summarizes how the company fares against peers on metrics that matter. 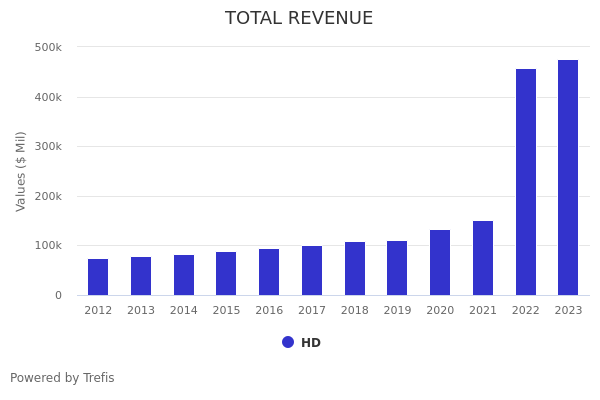 Home Depot vs. Mega Cap Stocks: Which Is A Better Investment?

Home Depot vs. Housing Stocks: Which Is A Better Investment?

Home Depot vs. E-Commerce Stocks: Which Is A Better Investment?

Home Depot vs. Sports Stocks: Which Is A Better Investment?

Housing Stocks Are Pricing In A Big Downturn

What to Expect From Home Depot’s Stock Post Q4 Results?

Should You Buy Home Depot Stock At $409?

Company Of The Day: Home Depot

What To Expect From Home Depot’s Stock Post Q3?

Company Of The Day: Home Depot

What To Watch For in Home Depot Stock’s Q2 Results?

What To Expect From Home Depot’s Stock After Earnings?