We think that Estee Lauder (NYSE:EL) currently is a better pick compared to Coty (NYSE:COTY). Estee Lauder stock trades at almost 8x trailing revenues, much more than Coty’s 2x multiple. Does this gap in the companies’ valuations make sense? We believe it does, and we only expect it to increase further. While both companies have benefited since the lockdowns started being lifted, due to a general rise in demand for makeup and beauty products, Coty’s revenues have been in a downtrend since 2017, while Estee Lauder’s sales have been steadily trending upward. Estee Lauder’s revenues have grown from $11.8 billion in FY ’17 to $16.2 billion in FY ’21. At the same time, the company saw EBIT margins rise from 14.3% to 21.3%. In comparison, Coty’s revenues have steadily dropped from $7.7 billion in FY ’17 to $4.6 billion in FY ’21 (both companies’ fiscal years end in June). Additionally, Coty’s EBIT margins have remained negative over the years, and currently stand at -5.6%.

Having said that, there is more to the comparison, which makes EL a better bet than Coty, even at these valuations. Let’s step back to look at the fuller picture of the relative valuation of the two companies by looking at historical revenue growth as well as operating income and operating margin growth. Our dashboard Estee Lauder vs Coty: Industry Peers; Which Stock Is A Better Bet? has more details on this. Parts of the analysis are summarized below.

1. Estee Lauder Is The Clear Winner On Revenue Growth

While Coty has seen revenue fall from $7.7 billion in FY ’17 to $4.6 billion on an LTM basis, EL’s revenues have steadily risen from $11.8 billion to $16.2 billion over the same period, driven by successful expansion into emerging markets, combined with growth in the premium cosmetics segment. However, for their most recent Q1 ’22 earnings (reported earlier this month), both companies saw YoY revenue growth of around 21-22%.

With stronger revenue and margin growth than Coty, and with EBIT margins consistently in the double digits, we believe Estee Lauder is a better bet than Coty.

3. Estee Lauder Is Also In A Better Net Cash Position

Estee Lauder’s revenues are much larger than that of Coty, and the former also has a higher EBIT margin and has seen higher historical revenue growth. Our comparison of the post-Covid recovery above, also shows that Estee Lauder has been performing better than Coty lately. Despite Estee Lauder’s P/S ratio almost 4x that of Coty’s, we expect this gap to only widen, supported by Estee Lauder’s stronger financials. As such, we believe that Estee Lauder is currently a much better bet compared to Coty stock. 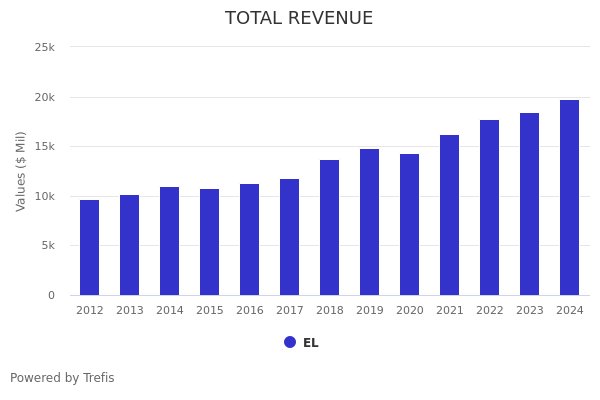 Why Estee Lauder Stock Moved: EL Stock Has Gained 79% Since 2018 Primarily Due To Favorable Change In Price To Sales Multiple (P/S)