Comcast stock (NASDAQ: CMCSA) has seen a rise of close to 16% in the last six months and currently trades at little over $58 per share. The company’s foray into streaming with the launch of Peacock in mid-2020 helped boost the stock price as streaming demand has been high during the pandemic. In just a year from its launch, Peacock has 54 million signups at the end of Q2 2021. Additionally, there are 20 million accounts that are active every month, which indicates numbers ahead of earlier projections. The signups indicate a huge jump from 42 million at the end of Q1 2021, which could be partially due to the streamer allowing content to show on Amazon Fire TV. Also, with Peacock streaming some big-ticket items like “The Office” and signing an exclusive agreement with WWE Network to stream wrestling, the subscriber count is expected to only grow in the coming months. Along with continued strong demand for streaming, with the gradual lifting of lockdowns and a successful vaccine rollout, Comcast’s traditional businesses, like cable and theme parks, are also expected to see recovery in the coming quarters. This has driven the stock higher in the last few months. But will Comcast’s stock continue its upward trajectory over the coming weeks, or is a correction in the stock more likely?

According to the Trefis Machine Learning Engine, which identifies trends in a company’s stock price data for the last ten years, returns for CMCSA stock average over 5% in the next three-month (63 trading days) period after experiencing a 16% rise over the previous six-month (126 trading days) period. Also, there is a 78.5% probability that the stock will give a positive return in the next three months. But how would these numbers change if you are interested in holding CMCSA stock for a shorter or a longer time period? You can test the answer and many other combinations on the Trefis Machine Learning to test CMCSA stock chances of a rise after a fall and vice versa. You can test the chance of recovery over different time intervals of a quarter, month, or even just one day! 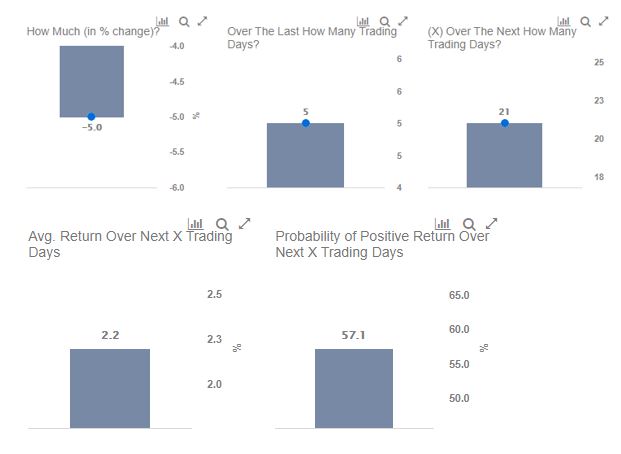 Question 1: Is the average return for Comcast stock higher after a drop?

Case 2: Comcast stock rises by 5% or more in a week

Is the average return for Comcast stock higher over the subsequent month after Case 1 or Case 2?

Try the Trefis machine learning engine above to see for yourself how Comcast stock is likely to behave after any specific gain or loss over a period.

If you buy and hold Comcast stock, the expectation is over time the near-term fluctuations will cancel out, and the long-term positive trend will favor you – at least if the company is otherwise strong.

For CMCSA stock, the returns over the next N days after a -5% change over the last 5 trading days is detailed in the table below, along with the returns for the S&P500:

The average return after a rise is understandably lower than after a fall as detailed in the previous question. Interestingly, though, if a stock has gained over the last few days, you would do better to avoid short-term bets for most stocks.

CMCSA’s returns over the next N days after a 5% change over the last 5 trading days is detailed in the table below, along with the returns for the S&P500:

It’s pretty powerful to test the trend for yourself for Comcast stock by changing the inputs in the charts above.

What is Driving Comcast Stock Higher?

How Is Comcast Positioned Compared To Its Rivals?

Is Comcast Stock Undervalued At $56?

Comcast Stock Looks Undervalued Even At An All-Time High

Comcast Stock Jumps 20% In 3 Months – Will The Rally Continue?

Company of the Day: Comcast