Per Boeing’s (NYSE: BA) commercial market outlook, the global passenger traffic is likely to grow at an annual rate of 4% over the next two decades. The company estimates that there will be 43,000 global deliveries of new aircraft with a strong demand for single-aisle aircraft. Interestingly, Boeing has an order backlog of 4,141 planes with 737 MAX accounting for 3,314 units. Due to the coronavirus pandemic and suspension of MAX’s production, the company’s total order backlog declined from $463 billion in 2019 to $363 billion in 2020 – indicating a drop in near-term demand. However, the passenger numbers at TSA checkpoints have consistently remained 20% below pre-Covid levels in the past two months. Moreover, the company highlighted in the commercial market outlook that aircraft retirement rates increase after a financial crisis, as observed after the Great Recession and SARS outbreak, implying a strong likelihood of new orders for Boeing aircraft in the coming years. We highlight the key factors driving Boeing’s Valuation including revenues, margins, valuation multiple, and competitive comparison with peers in an interactive dashboard analysis. 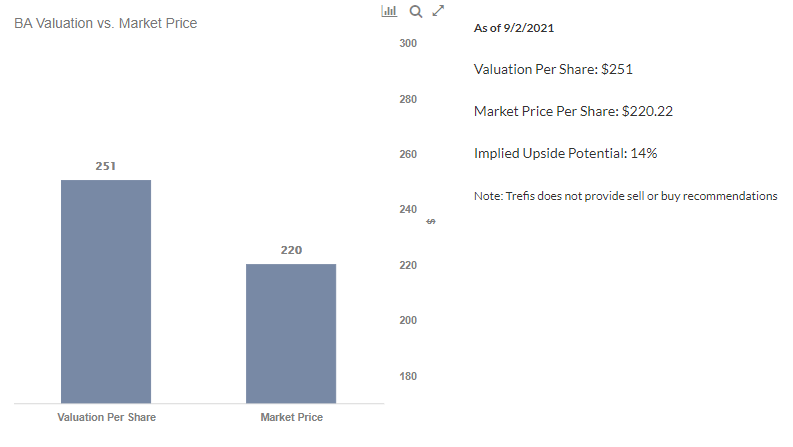 With the travel & tourism industry observing a downtrend due to the fears of another infectious wave, Boeing (NYSE: BA) is likely to observe slow near-term demand for its aircraft. Moreover, the company is yet to restart the production of MAX aircraft later this year – a key factor weighing on the top line. Per Q1 filings, Boeing is expecting to increase MAX’s production to 31 per month by early-2022. However, the stock is a good pick for long-term gains as new aircraft orders by United Airlines and Southwest Airlines indicate strong air traffic demand in the coming years. Notably, the increase in Boeing’s long-term debt obligations has largely been due to piled-up inventories. Trefis highlights the quarterly trends in revenues, earnings, stock price, and expectations for Q2 2021 in an interactive dashboard analysis, Boeing Earnings Preview.

Recently, United Airlines (NASDAQ: UAL) announced an additional 200 plane order of Boeing (NYSE: BA) 737 MAX aircraft, raising hopes of a quick rebound in travel demand and alleviating concerns regarding MAX’s manufacturing shortcomings. Notably, the shares of United Airlines and Boeing remain 30% below pre-Covid levels despite a sizable recovery in passenger numbers at TSA checkpoints. United Airlines is expecting to observe strong cash generation assisted by rising passenger demand, while Boeing is likely to restart MAX production during the latter half of the year. Despite United and Boeing’s $4 billion and $7.5 billion of operating cash outflow last year (excluding the impact of $11 billion increase in inventories), both companies reported positive cash flow in the first quarter (excluding the impact of working capital changes for Boeing) – indicating an improvement in operating efficiency coupled with the favorable impact of government assistance. We highlight the historical trends in the company’s revenues, margins, and valuation multiple in an interactive dashboard analysis, The Boeing Company (BA) Stock Has Lost 26% Since 2018?

In January, Boeing (NYSE: BA) entered into a $2.5 billion agreement with the U.S. Department of Justice ending the two-year investigation on the 737 Max program. Per the agreement, Boeing is required to pay a $243 million penalty, $500 million compensation to the kin of people who lost their lives in MAX crashes, and $1.77 billion to airline customers. Notably, the company already has a $5.5 billion short-term liability related to customer concessions on its balance sheet. While the recent lawsuit by investors is a concern, the company’s ballooning debt is primarily from high inventory levels. Moreover, Southwest’s 100 plane order reinstates confidence in MAX after the FAA’s clearance. As air travel demand picks-up, the reduction of Boeing’s 400+ plane inventory is the key trigger for a sizable upside in the stock. Our interactive dashboard analysis highlights Boeing’s stock performance during the current crisis with that during the 2008 recession.

The shares of Southwest Airlines (NYSE: LUV) have rallied 20% in the past 21-days reaching their pre-Covid level, propelled by the second round of payroll support by the U.S. government and an increase in passenger numbers at TSA checkpoints. Interestingly, Southwest is a prominent Boeing 737 MAX customer with a total of 380 aircraft to be delivered in the next couple of years. Despite the lifting of the FAA’s ban in November 2020, the shares of Boeing (NYSE: BA) remain around 30% below pre-Covid levels. While the FAA’s order requires design changes and revamp of pilot and crew training programs to safely fly again, the company’s ballooning debt due to high inventory levels is expected to ease with aircraft deliveries. Trefis compares the historical stock price trends between Boeing and its prominent MAX customers in an interactive dashboard analysis, BA Stock Has 50% Chance Of A Rise Over The Next Month After Rising 4.3% In The Last 5 Days.

In a recently published travel outlook by Expedia, air travel is expected to boom later during the year with young population (Millennials and Gen Z) traveling the most. Over the past 21 days, Southwest Airlines, United Airlines, and American Airlines’ stocks have gained 20%, 27%, and 25%, respectively. On the contrary, Boeing stock has increased by 12%, 10%, and 4% over the twenty one-day, ten-day, and five-day period respectively. Per Boeing’s commercial market outlook, global passenger traffic and aircraft fleet are expected to grow annually by 4% and 3.2% in the next twenty years, respectively. Also, new aircraft demand will mostly be driven by older aircraft replacements, almost 56% of new deliveries, in the coming decade.

Boeing’s debt is due to high inventory levels

While the 737 MAX production is expected to resume later this year, the 450 planes in the warehouse are likely to meet near-term customer demand and generate cash flow. Also, Boeing reported just $7.5 billion of operating cash outflow (excluding the impact of an $11 billion increase in inventories) in 2020, which is significantly lower than the $55 billion drop in the stock’s market capitalization. Thus, the resumption of MAX production is the key trigger for a sizable upside in Boeing stock from current levels.

Is there a better pick over Boeing? Boeing Stock Comparison With Peers summarizes how BA compares against peers on metrics that matter. You can find more such useful comparisons on Peer Comparisons.

Is there a dip buying opportunity on The Boeing Company stock when it has corrected by over 20% in 30 days?

Is there a dip buying opportunity on The Boeing Company stock when it has corrected by over ... in null days?

What to expect for The Boeing Company stock, one day after earnings?

Down 27% In A Month, Will Boeing Stock See Even Lower Levels?

Are Investors Too Optimistic On Howmet Aerospace Stock?