Microsoft’s proposed acquisition of Activision Blizzard (NASDAQ: ATVI) has faced regulatory hurdles in the U.S., Europe, and the U.K. In a recent turn of events, the U.S. FTC has sued Microsoft to block the proposed acquisition stating that it will hurt competition in the gaming industry. [1] Now, Microsoft is willing to give concessions. It has already reached an agreement with Nintendo to offer Call of Duty on its platform for the next decade, and it has offered a similar deal to Sony. Microsoft has stated that it is confident in its case and expects the deal to go through.

We believe that Activision Blizzard is poised for growth, irrespective of the deal status. The company is home to some of the largest franchises, including Call of Duty and Candy Crush. Although the gaming industry is witnessing a slowdown in user engagement after robust growth during the pandemic, monthly active users (MAUs) are expected to trend higher in the coming years with new game launches. Despite the recent decline, MAUs for gaming companies are better than in 2019, before the pandemic. For perspective, Activision Blizzard’s total average MAUs rose 15% to 401 million in 2021, compared to 349 million in 2019, before the pandemic. This metric has now fallen to 368 million as of September 2022.

Activision Blizzard has consistently improved its operating margins from 18.5% in 2017 to 37.0% in 2021, before falling to 27.0% for the last twelve months period, given the impact of rising costs. Our Activision Blizzard Operating Income Comparison dashboard has more details. The company’s balance sheet is also robust, with a 6% debt as a percentage of equity and 30% cash as a percentage of assets.

We estimate Activision Blizzard’s Valuation to be $94 per share, over 25% above its current market price of $75. ATVI stock has seen a rise of 1% in a month, while it’s up around 12% year-to-date. However, it remains well below the $95 price offered by Microsoft. At its current levels, ATVI stock is trading at 20x its 2023 earnings estimate of $3.73, compared to the last three-year average of over 24x, implying that it has ample room for growth. Overall, any dip in ATVI stock from here can be used as a buying opportunity for long-term gains.

While ATVI stock has ample room for growth, it is helpful to see how Activision Blizzard’s Peers fare on metrics that matter. You will find other valuable comparisons for companies across industries at Peer Comparisons. 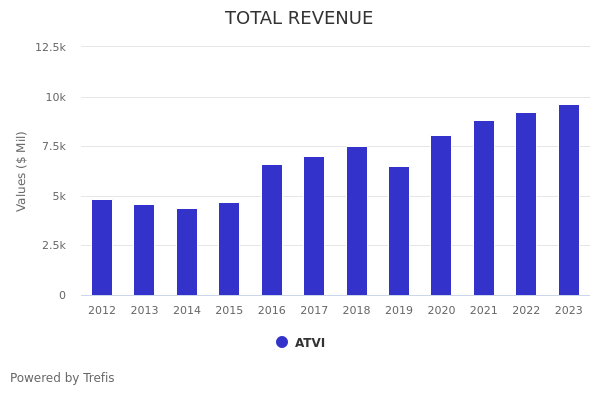