After gaining 30% in the past quarter, ADP stock (NASDAQ: ADP) looks fairly priced based on its current P/S multiple of 5x. However, the market is pricing ADP’s competitor Paycom Software (NYSE: PAYC) at a much higher P/S multiple of 30x. Does that make ADP a better buy over PAYC? Comparing a slew of factors such as historical revenue growth, returns, and risk, Trefis believes that Paycom Software stock has more room for growth despite its higher P/S multiple.

The price-to-sales or P/S multiple for a company is higher when the sales growth is higher, and it has a demonstrated ability to translate those sales to profits, with an expectation to do so consistently. In the past few years, Paycom’s revenues have grown at an annual rate of 31% and its operating margins have consistently remained within the 28-30% range. Interestingly, Paycom’s revenues are just a fraction of ADP’s (5% of ADP), but its market capitalization of $24 billion is about one-third that of ADP’s $72 billion. At 30% growth, Paycom’s Revenues can reach a quarter of ADP’s revenues in the next 5 years – indicating a strong likelihood of a downtrend in the stock for the market leader ADP. Our dashboard ADP vs. Paycom: Is ADP Stock Appropriately Valued Given Its lower P/S Multiple Compared to Paycom? details the fuller picture, parts of which are summarized below.

Coming to Returns, ADP is the market leader in the payroll processing business and has been providing consistent returns to investors as dividends and share repurchases. ADP reports a lower operating margin mainly due to its PEO business, where employees of clients are co-employed by ADP.

As neither of the two companies has considerable debt on their balance sheet, market consolidation or technological disruption are the keys risks to their revenues and earnings.

While Paycom Stock has been on a bull run and looks promising, 2020 has created many pricing discontinuities that can offer attractive trading opportunities. For example, you’ll be surprised how counter-intuitive the stock valuation is for Amazon vs. Etsy. Another example is Apple vs. Microsoft. 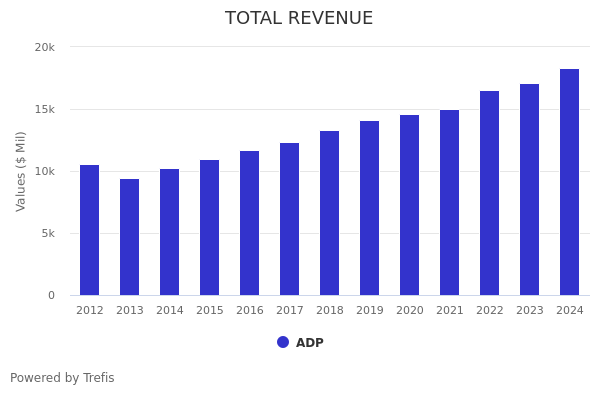 Is Paycom Stock A Good Pick To Realize Long-Term Gains?