The stock price of Abbott (NYSE: ABT) has seen a fall of 7% in a month, while it declined 4% in a week. This can largely be attributed to its recent voluntary recall of three types of baby formula – Similac, Alimentum, and EleCare – all manufactured in its Sturgis plant and with an expiration of April 1 or later. The recall came after four consumer complaints of bacteria contamination. [1] The U.S. FDA is currently investigating complaints of four infant illnesses in Minnesota, Ohio, and Texas related to bacteria contamination. It has warned consumers not to use certain baby formula products made by Abbott. [2]

The broader markets haven’t been supportive either, given the geopolitical tensions around Russia and Ukraine. The S&P500 index has also slipped 3% in a week. However, now that ABT stock has seen a fall of 7% in a month will it continue its downward trajectory, or is a rise imminent? Going by historical performance, there is a higher chance of a rise in ABT stock over the next month. Out of 167 instances in the last ten years that ABT stock saw a twenty-one-day fall of 7% or more, 105 of them resulted in ABT stock rising over the subsequent one-month period (twenty-one trading days). This historical pattern reflects 105 out of 167, or about 63%, the chance of a rise in ABT stock over the coming month, implying that investors can use the current dip in ABT stock as a buying opportunity. See our analysis on Abbott Stock Chance of A Rise for more details.

This pattern suggests that ABT stock has a higher chance of rising in the next five days, ten days, and one month. 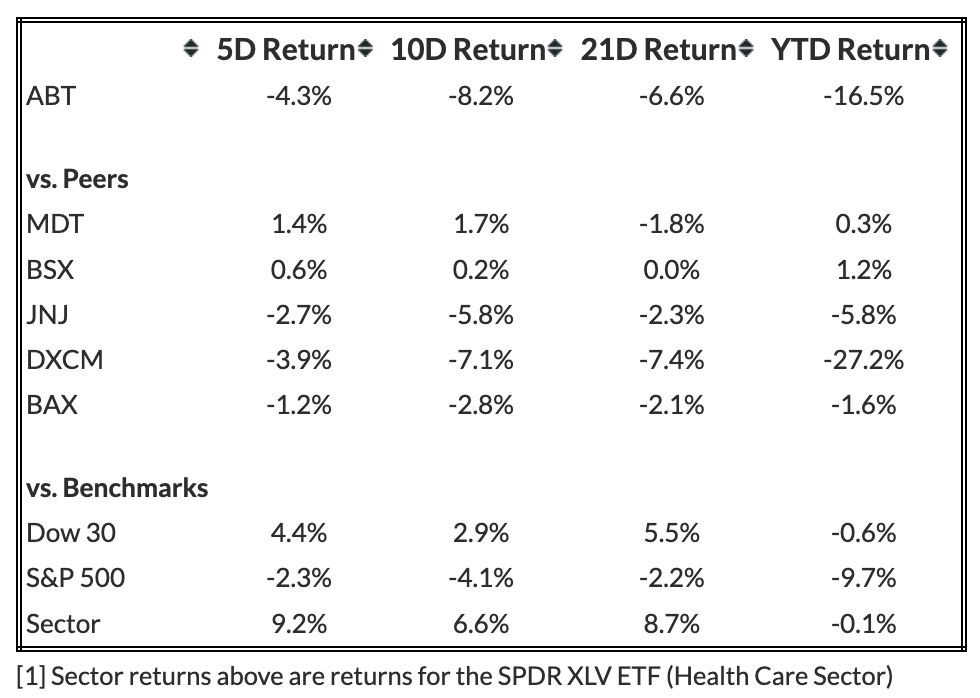 Looking at the long term view, we estimate Abbott’s Valuation to be $152 per share, reflecting a 29% upside from its current levels of $118. This represents a forward P/EBITDA of 33x based on Abbott’s EBITDA.

While ABT stock looks undervalued, our analysis on Abbott vs. Merck finds MRK, with a similar operating income base, to be an even better bet. Check out how Abbott’s Peers fare on metrics that matter. You will find other valuable comparisons for companies across industries at Peer Comparisons. 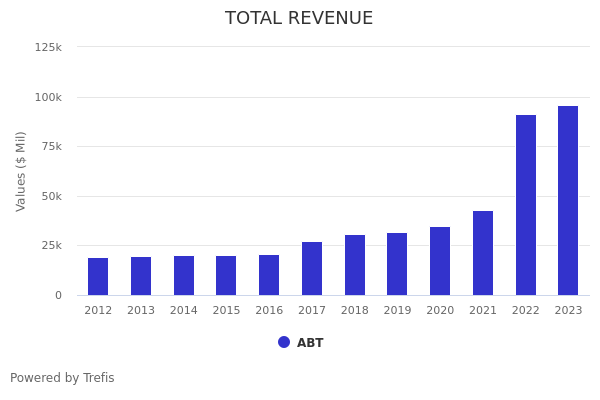 Why Abbott Laboratories Stock Moved: ABT Stock Has Gained 52% Since 2018 Primarily Due To Favorable Change In Revenues

Abbott Laboratories vs. Out Of Favor Health Care Stocks: Which Is A Better Investment?

Abbott Laboratories vs. Large Cap Stocks: Which Is A Better Investment?

Abbott Laboratories vs. Covid-19 Treatment Stocks: Which Is A Better Investment?

Why Covid-19 Testing Stocks Are Selling Off Despite Surging Demand

This Stock Is Likely To Outperform Abbott Laboratories