At a time when lower crude oil prices are taking airline profits to new highs, we revisit a key factor for the airlines to remain profitable. Until as late as 2008, U.S. airlines were struggling to post operating profits. In 2008 alone, U.S. airlines posted operating losses of $5.6 billion. [1] That has improved to operating profits of over $12 billion in 2014, and airline profits are expected to continue to grow in the current year driven by weak crude oil prices. So what – apart from the economic recovery from the financial crisis of 2008-09 – has enabled this turnaround in the airline industry’s financial health? We believe the restrained capacity addition followed over the last few years by network airlines such as United (NYSE:UAL), American (NASDAQ:AAL) and Delta (NYSE:DAL) has enabled this turnaround. Looking ahead, in our view, for airlines to remain profitable, it is essential that they maintain this capacity discipline.

See our complete analysis of United, Delta and American here

During the financial crisis of 2008-09, airlines slashed their flying capacities significantly in response to the sudden decline in demand for air travel. This is evident from the Bureau of Transportation Statistics data, which shows that available seat miles – a measure of flying capacity – fell from 744 billion miles in 2007 to 667 billion miles in 2009 in the domestic U.S. market. [2] In the following years, even as demand for air travel rose, network airlines did not add significant capacity. Delta Airlines, for instance, raised its capacity by only 1% during 2009-2013. [3] [4] United lowered its flying capacity from 253 billion miles in 2011 to 245 billion miles in 2013. [5] American did not add significant flying capacity to its network during this period either. As these large airlines added capacity with restraint in the face of rising demand for air travel, overall industry air fares increased. The Bureau of Transportation Statistics data again brings out this trend – average round-trip air fares in current dollars increased by 20% during 2007-2014. [6] These higher fares were instrumental in lifting the airline industry out of its losses. The capacity discipline of the last few years has been so retained that even today the total capacity in the domestic market is below its pre-recession level. The total available seat miles in the domestic market were around 700 billion miles in 2014, compared to 744 billion miles in 2007. ((Available seat miles data for all airlines, March 11 2014, www.transtats.bts.gov))

Prior to the financial crisis, airlines were adding capacity to their networks more freely in an attempt to grow their market shares. As a result, supply of seats was exceeding demand for flights, undermining the ability of airlines to charge profitable fares. As airlines persisted with this strategy, they continued to post losses. The economic crisis forced airlines to adjust their capacities in line with demand. Restrained capacity addition in the years following the crisis enabled air fares to rise, lifting the industry out of losses.

It is important to note here that consolidation in the airline industry also made it easier for the remaining airlines to add capacity with discipline.

Looking ahead, there is a possibility that airlines, enticed by lower oil prices and higher demand for air travel, could again begin to add capacity more freely. Higher supply of seats will pressure air fares, weighing on profits. So, airlines must keep in check their desire to grow more rapidly. The three large network airlines – United, American and Delta, which together control more than half of the total domestic capacity – have indicated that they will add capacity with restraint. United has said that it will grow its capacity by just 1.5-2.5% per year in 2015. [7] American will expand its 2015 capacity by 2-3%, from 2014, [8] and Delta will likely also expand its 2015 capacity at a rate of under 3% per year. We figure these modest rates of capacity expansion will not outpace growth in demand for flights, helping sustain the airline industry’s profit. 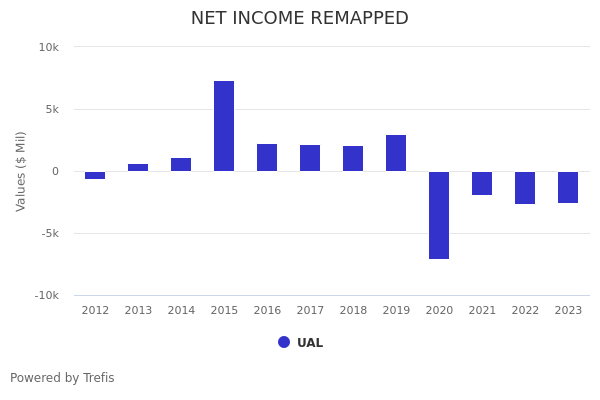 United Airlines Holdings During 2008 Recession vs. Now: UAL Stock Has 85% Upside If It Recovers To Pre-Covid Levels