Kinder Morgan Energy Partners’ (NYSE:KMP) Trans Mountain Pipeline Expansion Project plans to twin the the pipeline that carries crude oil from the Alberta oil sands to tankers in Burrard Inlet, British Columbia. This is the only pipeline from Alberta to the West Coast providing access for oil sands production to reach markets outside North America. The expansion will triple the carrying capacity of the pipeline from 300,000 barrels of oil equivalent per day(boe/d) to 900,000. [1] This has become a concern for environmentalists: in 2007, Kinder Morgan operated the pipeline that burst in Burnaby, British Columbia, spilling a large amount of oil into Burrard inlet, and a smaller spill happened in January, 2012 at the company’s Abbotsford facility in the Sumas Mountains.

Trefis has a price estimate of $83 for KMP, which is about 10% below the current market price.

Canadian regulators have delayed the date for the review for approvals of the Trans Mountain Expansion by seven months, pushing the date back to January, 2016. [2] The project has come in for a lot of criticism, with more than 70% of Vancouver’s residents opposed to the expansion, according to a poll. This makes the proposal a touchy subject, especially with the Federal elections coming up in 2015. Another issue concerns Aboriginal Rights: even though the proposed expansion is still pending approval from Canada’s National Energy Board, many Aboriginal community members feel that the board has gone beyond its rights and considered reviewing the project without their approval. The city of Burnaby has flat out refused cooperation with Kinder Morgan, banning engineers or other specialists hired by the company onto city property. This has prevented the company from being able to carry out several studies required for the expansion application. [2]

Taking into consideration all of the above points, it appears that the Trans Mountain expansion project may be pushed back beyond its initial target date of 2017. However, 2018 or 2019 might not be out of the question given there are several factors that could work in Kinder Morgan’s favor. Even though the population in British Columbia is against the pipeline expansion, the company has some strong allies in the Canadian oil and gas producers. The absence of a pipeline that can be reliably used to transport oil across the West Coast means that there is a huge discount applied to their production, in turn impacting their profitability. It is estimated that the Canadian Government might be losing as much as $8 billion a year in taxes in the absence of this pipeline. [3]

As far the company is concerned, this project represents just under one-third, or $5.4B, of its current $17.0B capex budget. Kinder Morgan believes that this project can deliver a steady stream of future cash flows. As the image below taken from a company presentation makes clear, the company’s targeted 10% annual dividend growth rate presupposes $5.2 billion in annual spending on the Trans Mountain pipeline. Any further delays in this project might impact the company’s profitability significantly. 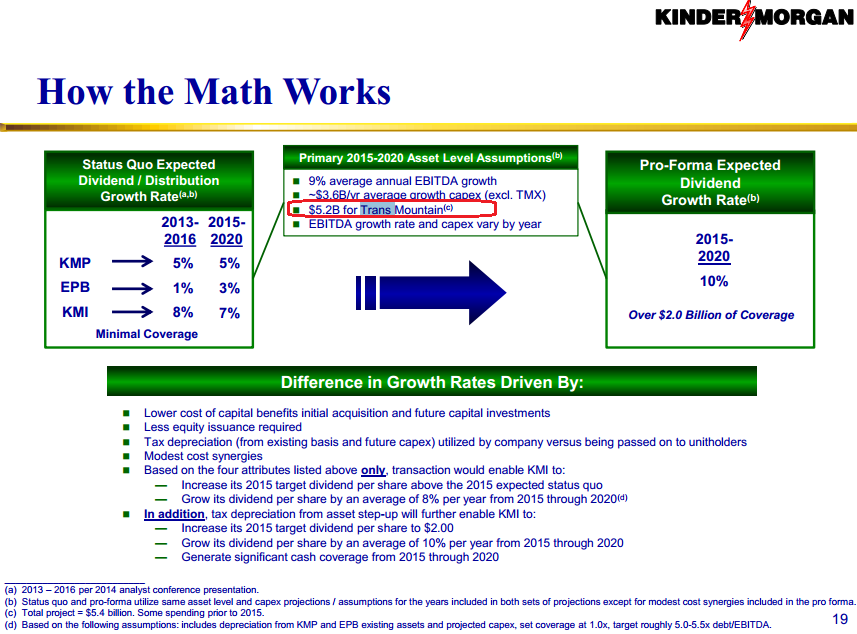 Considering the economics of oil transportation, it is possible that project can triple Kinder Morgan’s revenues from the Canadian crude transportation segment. Midstream assets work on long-term contracts and generate stable cash flows derived from fee-based revenues. Pipelines are usually low-risk assets as they are not extremely sensitive to the prices of the commodities being transported. Transportation contracts are generally based on volumes and fluctuations in the price of commodity do not impact the contract prices directly.

How KMP Plans To Benefit From Increased Consumption of LNG