CVS Caremark (NYSE: CVS) is a leading pharmacy drugstore chain with over 7,500 stores across the United States and revenues of over $123 billion in 2012 after several acquisitions and consolidation in the pharmacy drugstore business. Going forward we see several drivers to continued growth included the growth of generic drug sales, the pharmacy benefits business and in-store clinics to help with basic healthcare needs. In addition to this, its huge nationwide footprint makes its store accessible to most Americans, and we see continued expansion helping drive value. The stock is already up 20% this year since January, and based on these drivers we believe there could still be some upside to its intrinsic value.

Dominant Player In An Expanding Market

CVS Caremark is the second largest drugstore chain in the U.S. with 7,505 stores second only to Walgreen (NYSE:WAG) which has 8,500+ stores. CVS Caremark also operates 31 retail specialty pharmacies that support individuals that require complex and expensive drug therapies. The convenience and accessibility of stores are major determinants for a consumer to choose one store over another in the drug retailing industry. Having a large network of stores across the country helps CVS Caremark in capturing a higher market share than its competitors. During 2012, CVS Caremark filled 718 million prescriptions, which accounts for just over 20% of the U.S. retail pharmacy market. [1] Walgreen, on the other hand, accounts for about 19.2% share of the U.S. retail pharmacy market. [2]

In January 2006, Medicare Part D came into effect and expanded coverage to millions of people who were previously uninsured. As a result, as of May 2013 over 37.2 million people were enrolled in Medicare Part D. [3] The Patient Protection and Affordable Care Act, sanctioned a law on March 30, 2010, by President Obama, indirectly encourages drug utilization. The law is projected to expand insurance to millions of Americans previously without coverage, made possible partly by an expansion of Medicaid eligibility and partly through an insurance mandate. The newly insured patients are very likely to increase utilization of drugs. Expansion of coverage would have a lasting impact on the demand for drugs. Total prescription revenues of U.S. drugstores are expected to reach $350 billion by the end of 2015, growing at 5.3% annually. [4] We expect these factors to have a very positive impact on CVS Caremark’s revenues in the future.

Consistent Expansion In Revenues Supported By Rising Number Of Stores

CVS Caremark has grown rapidly from revenues of about $1 billion in 1985 to over $123 billion in 2012, and from about 17 stores in 1964 to 7,505 stores in 2013. Multiple acquisitions like Longs Drug stores, Sav-On & Osco stores and Eckerd Stores contributed significantly to the increasing store count. [5] We estimate the company’s revenues to grow at a similar pace in the future, in line with the rising store count.

Prescription drugs contributed about 68.8% to the company’s net revenues in 2012, up from 68.3% in 2011 and 68% in 2010. CVS Caremark has been actively substituting branded drugs for generic drugs to reduce the cost of prescriptions filled and improve its margins since they normally yield a higher gross profit rate than equivalent brand name drugs. The generic dispensing rate improved from 73% in 2010 to 79.2% in 2012. [1] As a result of improved generic dispensing rate, the income from continuing operations increased by 11.3% in 2012 to $3.9 billion. We expect the substitution to continue over the coming years, resulting in higher operating margins.

CVS Caremark maintains a national network of over 67,000 retail pharmacies that serve customers covered under the programs administered by Caremark. In addition to this, it also designs customized pharmacy benefit plans for its clients helping them in minimizing costs. [1] We estimate the number of pharmacy network claims processed by Caremark to grow at around 3% year-on-year, reaching over 1 billion by 2019, contributing significantly to the company’s top as well as bottom line.

MinuteClinic are small walk-in medical clinics within the CVS Caremark pharmacy stores, available at 650 locations within the United States. They utilize nationally recognized protocols to diagnose and treat minor health conditions, perform health screenings, monitor chronic conditions and dispense vaccinations at much lower prices than a hospital. The company expects to add another 150 MinuteClinics in 2013 and plans to operate about 1500 clinics by 2017. [1] CVS Caremark’s ExtraCare loyalty program currently has about 70 million active subscribers, accounting for 68% of front store sales transactions and 84% of total front store sales. [6] These have helped the company in maintaining a high customer retention ratio along with attracting new customers to shift to CVS Caremark’s network.

We currently have a $61.36 Trefis price estimate for CVS Caremark, about 5% higher than its current market price. 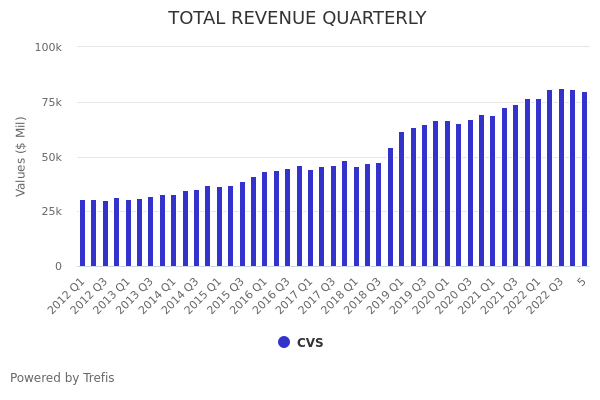 What’s Next For CVS Health Stock After A Solid Q3?

What’s Next For CVS Health Stock After A Downgrade For Its Medicare Plan?

CVS Health Stock Is A Better Pick Over This Giant Retailer

What To Expect From CVS Health’s Q2?

Is There A Better Pick Over Medtronic Stock?

What To Expect From CVS Health’s Q1?