Coach (NYSE:COH) reported its fourth quarter and fiscal year ended June 2016 results on August 9, 2016. While the company beat the earnings expectations, it missed out on revenue. 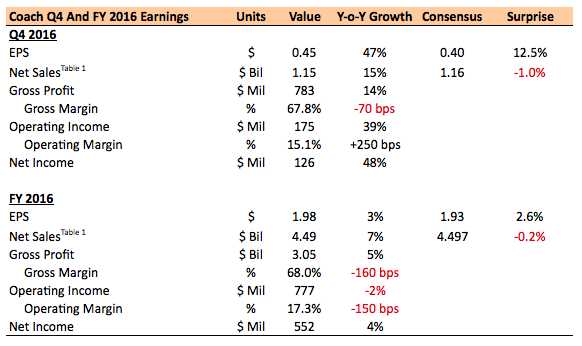 The biggest news to come out of Coach’s Q4 and FY 2016 results was the return to positive comparable sales in its North American segment. This is the first time since the third quarter of 2013, representing the seventh sequential improvement since the transformation plan was implemented by the company. This was driven by growth in the direct business, and actions to elevate the brand positioning and streamline the distribution, given the highly promotional nature of its department store channel. The company’s 1941 collection and its Disney collaboration resonated well with consumers, and revenue in the women’s segment reaped its benefits, along with improvement in the company’s leather goods. The majority of the renovated luxury concept stores’ comparable sales exceeded those of its other stores, with a further 165 converted in the quarter, taking the total up to 300 for the financial year, and 450 overall. The company also noted a low single digit increase in the North American premium women’s handbag and accessories market, with Coach attaining a share of 16%, down from 17% a year ago. The company’s above $400 price bracket rose in penetration, and now constitutes 40% of its handbag sales, up from 30% last year.

The International segment also delivered strong results, particularly in European and Mainland China, where double digit growth was reported in the quarter. Sales in Greater China were led by growth on the Mainland, but was offset by continued weakness in Hong Kong and Macau. For the year, sales increased 5% on a constant currency basis, to $605 million, beating the $600 million guidance provided by the company, in spite of a further devaluation in the renminbi. Chinese consumers play an important role in the growth for the company, with Chinese tourists driving demand in a number of regions, including Southeast Asia. Decline in Chinese tourist travel to Japan, impacted by currency fluctuations, resulted in a 5% fall in sales there in the quarter, on a constant currency basis, but increased 7% on a dollar basis. Despite relative softness in France, sales rose 50% in Europe in FY 2016, reaching $135 million, exceeding expectations of sales of $125 million.

Coach is taking a number of steps to continue with the earnings momentum going into FY 2017, despite the volatility in tourist spending flows, and macroeconomic, geopolitical, and promotional headwinds. The company wants to continue with its luxury concept stores, with a total of 400 expected to be completed by the end of the year. The men’s business is another area of focus, and the company wants to generate 20% of its revenues from this segment by the end of FY 2017. The company also wants to rationalize its department store distribution, by reducing its door count by 25%, or over 250 locations, while at the same time reducing its markdown allowances, given the high level of promotions in this space. Coach also has other collaborations in mind for the next fiscal year, including one with PAC-MAN, which will be launched this fall.

Have more questions on Coach? See the links below:

Hydrogen Stocks Have Corrected, Should You Buy?

What To Expect From Snap Stock?

What’s Next For Mirati Therapeutics Stock After A 20% Rise In A Month?

What To Expect From Walgreens Stock As It Reports Its Q3 Results?

With Iron Ore Prices Volatile, Is Rio Tinto Stock Worth A Look?