We believe that Dollar General stock (NYSE: DG), Ollie’s Bargain Outlet Holdings stock (NASDAQ: OLLI), and BJ’s Wholesale Club Holdings stock (NYSE: BJ) are currently better valued than Walmart’s stock (NYSE: WMT). Walmart’s current price-to-operating income ratio of 21x is higher than levels of 14x for DG, 13x for OLLI, and 12x for BJ’s. But does this gap in valuation make sense? We don’t think so, especially if we look at the fundamentals. More specifically, we arrive at our conclusion by looking at historical trends in revenues and operating income for these companies. Our dashboard Better Bet Than WMT: Pay Less To Get More From Industry Peers DG, OLLI, BJ has more details – parts of which are summarized below.

Walmart’s Revenues grew at an average rate of around 4% over the last three years, as compared to a growth of 13% for Dollar General Revenues, 19% for Ollie’s Bargain Outlet Revenues, and 8% growth for BJ’s Wholesale Club Revenues. Even if we look at the revenue growth over the last twelve-month period, WMT’s growth of nearly 4% is much worse than 8% growth for DG, 33% rise for OLLI, and 9% rise for BJ.

The three-year average operating income growth for WMT stands at 16%, much lower than 23% for Dollar General, 29% for Ollie’s, and 46% for BJ’s Wholesale. Better revenue growth for the latter three led to higher operating income for these companies. Looking at the last twelve-month period, WMT’s 31% drop in operating income compares with 9%, 76%, and 28% gains for DG, OLLI, and BJ, respectively.

Although WMT’s revenue base is much larger than all its peers, each of these companies has seen higher growth in revenues and operating income than WMT in the last twelve months, as well as the last three years. Despite better profit and revenue growth, these companies have a comparatively lower market cap-to-operating income ratio. Walmart’s underperformance in revenue and operating income growth compared to the mentioned industry peers reinforces our conclusion that the stock is expensive compared to its peers. And, we think this gap in valuation will eventually narrow over time to favor the group of comparatively less expensive names – Dollar General, Ollie’s Bargain Outlet, and BJ’s Wholesale Club.

WMT Stock Comparison With Peers shows how it compares against other peers on metrics that matter.

What To Expect From Philip Morris’ Q4? 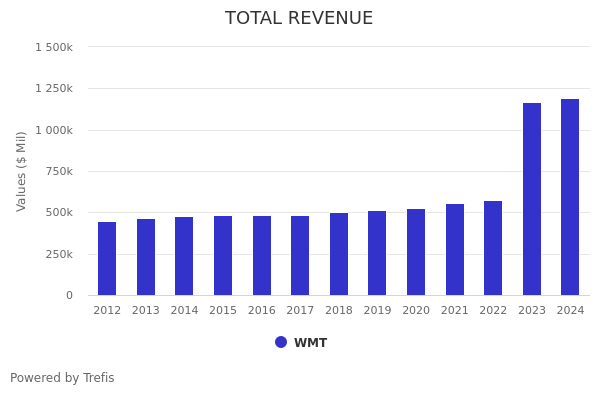 Better Bet Than WMT Stock: Pay Less Than Walmart To Get More From S&P 500 Stocks ABT, AVGO, UPS, PFE, COP

Walmart vs. Mega Cap Stocks: Which Is A Better Investment?