Having gained more than 37% since the March bottom, VMware’s stock (NYSE: VMW) is still below its pre-Covid high and has the potential to grow. Our conclusion is based on a detailed comparison of VMW’s performance against the S&P 500 now as well as during the 2008 downturn in our interactive dashboard analysis, 2007-08 vs. 2020 Crisis Comparison: How Did VMware’s Stock Fare Compared With S&P 500?

Despite the Covid-19 crisis, VMware, one of the world’s largest providers of cloud computing and virtualization software and services, has seen its revenues grow for the first nine months of the year by 9% to $8.5 billion compared to the same period in the previous year. VMware has continuously beat consensus revenue and earnings for the first 3 quarters of FY 2021 (FY ends in January). In the recently concluded Q3 2021 (ended Oct 2020) EPS was $1.03 compared to $0.98 in the same period of the previous year, while total revenues were $2.9 billion, up 8% y-o-y. Further, the company reported $3.1 billion in cash inflows from operating activities for the first nine months.

VMware’s stock (NYSE: VMW) has rallied 32% since late March (vs. about 44% for the S&P 500) to its current level of $139. This is after falling to a low of $106 in late March, as a rapid increase in the number of Covid-19 cases outside China spooked investors, and resulted in heightened fears of an imminent global economic downturn. The stock is currently about 14% below its February 2020 high of $162. Are the gains warranted or are investors getting ahead of themselves? We believe that the stock recovery is justified, and think the stock price is likely to increase marginally from its current level in the near term.

How Did VMware Fare During 2008 Downturn?

We see VMW’s stock declined from levels of around $74 in October 2007 (the pre-crisis peak) to roughly $17 in March 2009 (as the markets bottomed out) – implying that the stock lost as much as 77% of its value from its approximate pre-crisis peak. This marked a drop that was higher than the broader S&P, which fell by about 51%.

The global spread of coronavirus has led to lockdown in various cities across the globe, which has affected industrial and economic activity. This is likely to adversely affect consumption and consumer spending, which would lead to lower demand for software, and web services affecting VMware’s revenues. That said, the company is also well poised to benefit from the growing number of people globally who are working from home thanks to its portfolio of software as well as services aimed at remote collaboration. While the company has already withdrawn its guidance for full-year 2020, we believe the company’s Q2 results in will confirm a hit to its revenues. 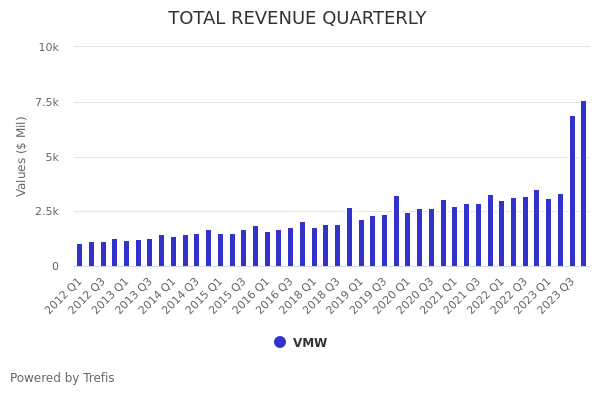 Company Of The Day: VMWare