Last month we discussed that based on its historical performance Norfolk Southern (NYSE: NSC) stock will likely see higher levels, after falling 3% in a week. While UNP stock has risen 7.5% in last five trading days, it is up nearly 6% from the levels of $248 it was at nearly a month ago. The recent rise can be attributed to broader market gains with Republicans now lending support on the debt ceiling issue to avoid a national default. There was also some positive data, such as better than expected employment levels in September, that aided the broader sentiment toward railroad stocks, with other companies such as CSX Corporation and Union Pacific also seeing over 5% gains in last five trading days.

Given this movement of 7.5% in a week, Norfolk Southern stock price forecast is 1.4% gains (to $266) over the next one month, based on the Trefis Machine Learning Engine. That said, we continue to believe that there is much more room for growth in NSC stock. While there are near term challenges due to rising input costs, higher fuel prices, and wages, which may impact the margin growth in the near term, it is likely that these incremental costs will be passed on to the customers. As the economy continues to open up gradually, the demand for railroads is expected to rise, bolstering Norfolk Southern’s top-line growth.

Looking at the full-year 2021, we forecast revenues to grow 12% to around $11 billion, and net margins to expand nearly 600 bps compared to 2020, which saw a larger impact of the pandemic on the company’s business. This clubbed with a lower number of shares outstanding, due to share repurchases (around 5.7 million shares repurchased in the first half of the year), EPS is expected to rise 49% y-o-y to $11.70. Going by our Norfolk Southern Valuation of $304 per share, based on $11.70 EPS and 26x P/E multiple, there is more than 15% upside potential from its current levels of $263. The 26x figure is below the 30x levels seen for NSC in 2020, and it is also largely in-line with Norfolk Southern’s peers, including Union Pacific and CSX Corporation.

The stock price of Norfolk Southern (NYSE: NSC) reached its all-time high of around $295 in May before a recent sell-off resulting in NSC stock falling to $250 levels currently. NSC stock has declined over 3% in the last five trading sessions. The stock prices of other railroad companies, including CSX and UNP, also saw losses of over 2% in the last week. The railroad companies have seen a rebound in demand over the recent quarters but the rise of Covid-19 cases over the last couple of months may impact the overall earnings growth in Q3. But will NSC stock continue its downward trajectory over the coming weeks, or is a recovery in the stock imminent?

According to the Trefis Machine Learning Engine, which identifies trends in the company’s stock price using ten years of historical data, returns for NSC stock average 2% in the next one-month (twenty-one trading days) period after experiencing a 3% drop over the previous week (five trading days). But how would the returns fare if you are interested in holding NSC stock for a shorter or a longer time period? You can test the answer and many other combinations on the Trefis Machine Learning Engine to test Norfolk Southern stock chances of a rise after a fall. You can test the chance of recovery over different time intervals of a quarter, month, or even just 1 day!

Question 1: Is the average return for Norfolk Southern stock higher after a drop?

Case 1: Norfolk Southern stock drops by -5% or more in a week

Case 2: Norfolk Southern stock rises by 5% or more in a week

Is the average return for Norfolk Southern stock higher over the subsequent month after Case 1 or Case 2?

Try the Trefis machine learning engine above to see for yourself how Norfolk Southern stock is likely to behave after any specific gain or loss over a period.

Answer: If you buy and hold Norfolk Southern stock, the expectation is over time the near-term fluctuations will cancel out, and the long-term positive trend will favor you – at least if the company is otherwise strong.

For NSC stock, the returns over the next N days after a -5% change over the last five trading days is detailed in the table below, along with the returns for the S&P500:

You can try the engine to see what this table looks like for Norfolk Southern after a larger loss over the last week, month, or quarter.

Answer: The average return after a rise is understandably lower than after a fall as detailed in the previous question. Interestingly, though, if a stock has gained over the last few days, you would do better to avoid short-term bets for most stocks – although NSC stock appears to be an exception to this general observation.

It’s pretty powerful to test the trend for yourself for Norfolk Southern stock by changing the inputs in the charts above.

While NSC stock may rebound, 2020 has created many pricing discontinuities which can offer attractive trading opportunities. For example, you’ll be surprised how counter-intuitive the stock valuation is for Kansas City Southern vs Canadian Pacific Railway. 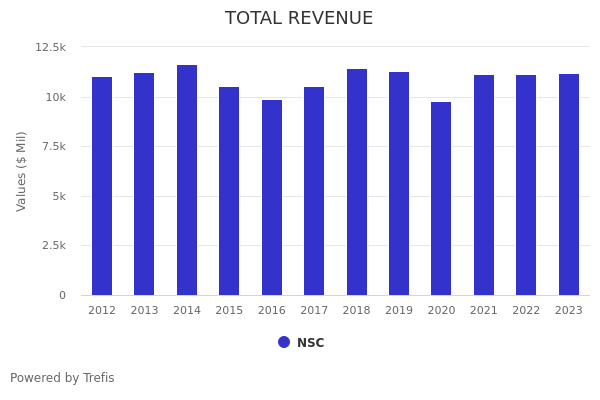 Why Norfolk Southern Stock Moved: NSC Stock Has Gained 62% Since 2018 Primarily Due To Favorable Change In Price To Sales Multiple (P/S)