We think that Microsoft’s stock (NASDAQ: MSFT) currently is a better pick compared to IBM’s stock (NYSE: IBM). Microsoft’s stock trades at about 14.6x trailing revenues, compared to around 1.5x for IBM. Does this gap in the companies’ valuations make sense? We believe so. Microsoft has recorded revenue growth despite the pandemic and a better growth in operating margin over the last three years. Microsoft has also seen stronger revenue growth in the last twelve months. However, there is more to the comparison, which makes Microsoft a better bet than IBM at these valuations. Let’s step back to look at the fuller picture of the relative valuation of the two companies by looking at historical revenue growth as well as operating income and operating margin growth. Our dashboard IBM vs Microsoft: Industry Peers; Which Stock Is A Better Bet? has more details on this. Parts of the analysis are summarized below.

With Microsoft’s fiscal year ending in June, its ongoing FY is 2022, while IBM’s fiscal year ends in December, its ongoing FY is 2021. If compared on the basis of the past three years, Microsoft trumps IBM in revenue growth. Microsoft’s revenue has gained by rate 15.1% over the last three FY’s. On a comparable basis, IBM’s revenue fell by the rate of 2.4% over the last three FY’s. Further, for the most recent quarter (Q1’22 for Microsoft and Q3’21 for IBM), Microsoft’s revenues jumped 22% YoY, while IBM’s rose by 0.3%.

While Microsoft’s trailing revenue multiple stands higher than that of IBM, it has seen stellar growth in revenues and operating margins compared to IBM. A consistent rise in revenues and EBIT Margin makes Microsoft more attractive, despite a higher P/S ratio of 14.6x vs IBM’s 1.5x. We believe Microsoft has the potential to keep riding ahead, supported by strong financials, and the gap in valuation could further widen over time. As such, we believe that Microsoft is currently a better buying opportunity compared to IBM stock.

While MSFT stock is likely to move higher in the near term, there are several peers in its sector that look like a Better Bet Than MSFT Stock. Also, Microsoft Peer Comparisons summarizes how the company fares against peers on metrics that matter. 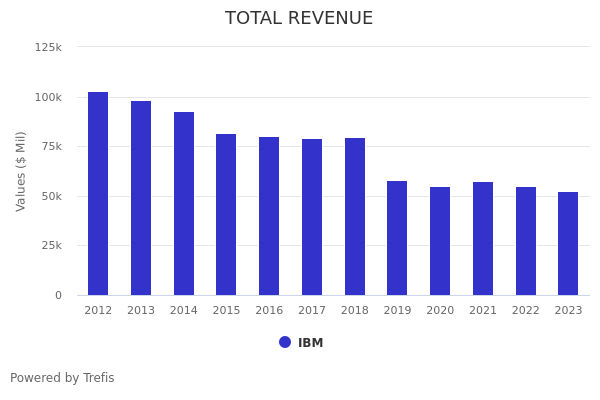 Will IBM’s Stock Gain Momentum Later In The Year?