General Motors stock has had a tough year so far, falling by about 44% since early January, considerably underperforming the S&P 500 which remains down by about 25% over the same period. Like most other automotive players, GM has been impacted by a host of factors, including surging inflation and parts shortages.  However, there have been some positive developments of late. On Monday GM said that its U.S. sales for Q3 2022 rose 24% versus last year to 555,580 vehicles, indicating that semiconductor supply is gradually improving. This compares to a tough Q2 when U.S. deliveries declined 15% year-over-year.  Inventory is also picking up, with dealers holding a stock of about 359,292 vehicles at the end of the quarter, compared to 247,839 at the end of Q2. This could bode well for GM’s revenues and earnings in the near term.

GM’s electrification plans are also slowly gaining traction. The company has indicated that it could sell one million electric vehicles each year in North America by 2025 and it is making progress toward this goal. Late last month rental car major Hertz announced plans to order as many as 175,000 EVs from GM over the next five years. GM also said that it witnessed record sales of the Chevrolet Bolt EV and Bolt EUV over Q3 2022, totaling 14,709 units, with the company planning to raise production for global markets.

Now, there are concerns about the state of the U.S. economy, with GDP contracting over the last two quarters and the Fed continuing with its aggressive rate hikes as it looks to rein in inflation. The benchmark federal funds rate now stands at over 3%, from just about 0.25% at the beginning of this year, and this typically doesn’t bode well for rate-sensitive sectors such as the auto industry. That being said, GM’s sales were already quite depressed over 2020 and 2021 (U.S. sales of around 2.3 million in 2021, compared to 3.2 million in 2019) due to the semiconductor shortage, so there may not be too much downside even in an economic downturn.

GM stock’s valuation also appears very reasonable at current levels. At the current market price of about $34 per share, GM stock trades at just under 5x the mid-point of projected 2022 earnings. The markets also expect that GM’s growth will pick up, with the consensus pointing to about 20% revenue growth in 2022 and about 6% growth in 2023. GM also appears very optimistic about its long-term prospects, noting that it intends to double revenue to between $275 billion and $315 billion by 2030 while expanding margins to between 12% to 14%. Although we wouldn’t assign too much weight to these long-term forecasts, it does indicate that GM is positive about prospects as the auto industry pivots to EVs.

We remain bullish on GM stock with a $47 price estimate, which is about 45% ahead of the current market price. See our analysis on General Motors Valuation: Expensive Or Cheap for more details on what’s driving our price estimate for GM.  For more information on GM’s business model and revenue trends, check out our dashboard on General Motors Revenue: How GM Makes Money. 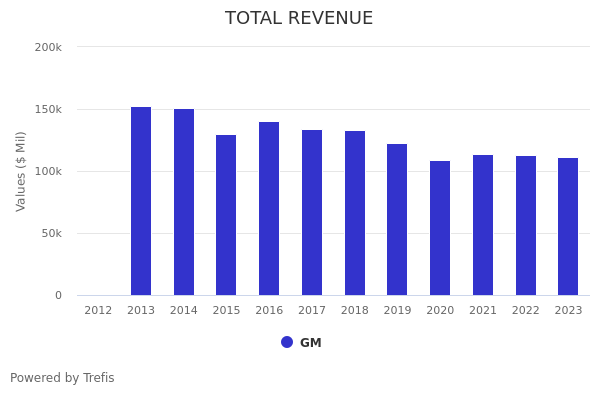 With Deliveries Picking Up, How Will GM Fare In Q3?

Forecast Of The Day: General Motors Number Of Vehicles Sold in North America

What’s Next For General Motors Stock?

Will GM Deliver An Earnings Beat?

Is GM’s Stock Undervalued At The Current Price?

GM’s Stock Up As EV Focus Continues, Will It Rise Further?