Dunkin’ Brands’ (NASDAQ:DNKN) stock price has increased more than 2x from $39.40/share in January 2016 to $80.90/share in August 2019. The increase was primarily driven by a continuous increase in Total Revenue, continuous buyback, and better P/E multiple. Revenue growth is expected to continue in 2019. A positive outlook has driven a rise in the company’s price-to-sales (P/S) and price-to-earnings (P/E) multiples.

You can view the Trefis interactive dashboard – Why Dunkin’ Brands Stock Climbed 2x since Jan. 2016? In addition, here is more Consumer Discretionary data. 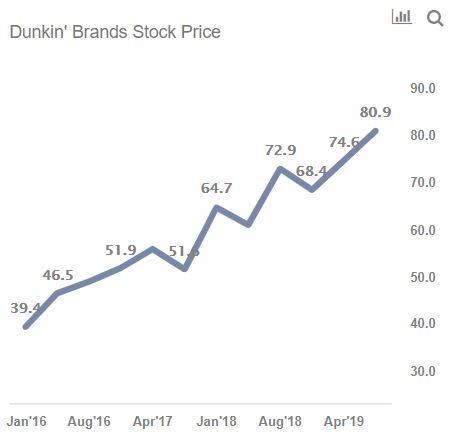 Profitability Margin to be nearly flat

Trefis expects a higher multiple and a positive outlook to bode well for DNKN’s stock and fundamentals. As per Dunkin’ Brands Valuation by Trefis, we have a price estimate of $74 per share for DNKN’s stock.

Dunkin’ Donuts US To Push Revenue Growth For Dunkin’ Brands

How Has Dunkin’ Brands Revenue Performed And What Is Its Potential?