China Mobile (NYSE:CHL), the largest Chinese wireless carrier, is expected to publish its Q4 and full year 2018 results in the coming weeks. We expect the company’s reported net profits to trend higher, driven by better management of marketing costs, potentially lower equipment sales (which reduces subsidy costs) and higher service revenues. In this note, we take a look at some of the key trends that we will be watching in the company’s wireless and wireline broadband business when it reports results.

Our interactive dashboard on what lies ahead for China Mobile in 2018 details our expectations for the company. You can modify any of our forecasts or key drivers to see the impact that changes would have on China Mobile results. In addition, here is more  Trefis data for Telecommunications companies and Consumer Staples companies

Over the full year, China Mobile added a total of 37.9 million subscribers at its wireless business, marking a slight decline from the 38.3 million net adds over 2017. However, the figure was well below smaller rival China Telecom, which added a total of 53 million subscribers during the period, leveraging its improved network coverage and marketing initiatives. Although China Mobile’s 4G penetration rose to about 77% as of the end of December, this is unlikely to translate into higher ARPU, on account of the government’s move to slash roaming and long-distance charges as well as data tariffs. For instance, over H1 2018, mobile ARPU stood at RMB 58 ($8.60), down by about 7% compared to last year.

With the growth in the core mobile business slowing down, China Mobile has been looking towards its wireline broadband operations and emerging businesses to drive future growth. The company made solid progress on this front over 2018, adding a total of 44 million wireline broadband customers, well ahead of its rivals, taking its total subscriber base to 157 million, per its monthly operating data. ARPU for the business could also trend slightly higher, driven by a larger mix of customers on higher speed plans and the company’s moves to enhance service quality. 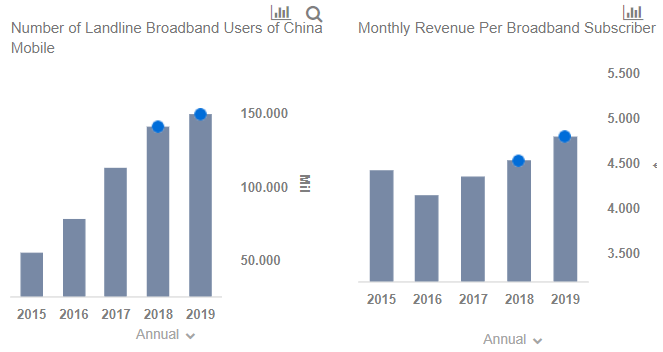 What’s behind Trefis? See How it’s Powering New Collaboration and What-Ifs
For CFOs and Finance Teams | Product, R&D, and Marketing Teams
All Trefis Data
Like our charts? Explore example interactive dashboards and create your own

Is The Market Undervaluing Chinese Telcos: A Comparison With Verizon, AT&T and Vodafone?

China Mobile (CHL) Stock: What's the Chance for a 10% Rebound or Reversion?

China Mobile (CHL) Stock: ... of days in last 3 months had ... or greater fluctuation

Is The Market Undervaluing Chinese Telcos: A Comparison With Verizon & AT&T?

What Is Driving Our $49 Price Estimate For China Mobile?

How Are Regulatory Changes Likely To Affect China Mobile’s Revenues In 2020?

How Does China Mobile’s Wireless Business Compare With Its Peers?

How Does China Mobile’s Wireline Broadband Business Compare With Its Peers?

Why China Telecom Continued To Outperform In January

How Did Chinese Wireless Carriers Fare In October?

China Telecom Continued To Punch Above Its Weight In July, With Strong Subscriber Adds

How Has China Mobile Fared Thus Far In 2018?

How Did Chinese Wireless Carriers Fare In April?