BlackRock’s stock (NYSE: BLK) has lost 24% YTD as compared to the 20% drop in the S&P500 index over the same period. Further, at its current price of $692 per share, the stock is trading 10% above its fair value of $621 – Trefis’ estimate for BlackRock’s valuation. The world’s largest asset manager topped the consensus estimates of revenues and earnings in the third quarter of 2022. It posted total revenues of $4.3 billion – down 15% y-o-y, mainly due to the impact of lower market levels and negative foreign exchange movement on average assets under management (AuM). Notably, the average AuM decreased by 11% y-o-y in the quarter. It led to a 10% drop in the total investment advisory, administration fees & securities lending revenue (base fees), followed by a 76% decrease in the performance fees. Overall, the adjusted net income decreased 16% y-o-y to $1.4 billion, partly due to lower revenues and partly due to higher operating expenses as a % of revenues.

The company’s top line was reduced by 5% y-o-y to $13.5 billion in the first nine months of 2022. It was primarily driven by lower average AuM, which led to a 2% drop in the total investment advisory, administration fees & securities lending revenue (base fees), followed by a 65% decrease in the performance fees. Altogether, the adjusted net income fell by 8% y-o-y to $3.9 billion over the same period.

Moving forward, we expect the same trend to continue in Q4. All in all, BlackRock revenues are estimated to remain around $17.78 billion in FY2022. Additionally, BLK’s adjusted net income margin is likely to see a slight drop in the year, resulting in an annual GAAP EPS of $33.19. This coupled with a P/E multiple of just below 19x will lead to a valuation of $621. 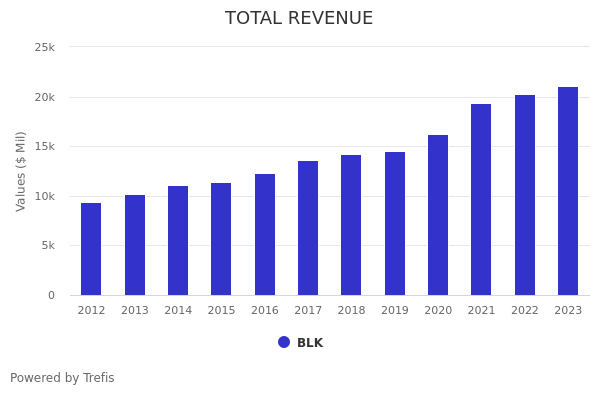 BlackRock Stock Topped The Consensus In Q4, What’s Next?

BlackRock To Top The Earnings Consensus In Q4?