Smartphone pioneer BlackBerry (NASDAQ:BB), which has since reinvented itself into a provider of security software and services, has seen a major rally this year. The stock is up by about 83% over the last 5 trading days and is up by 172% since the beginning of 2021. The S&P 500 is up by about 3% year-to-date. So what’s driving the surge? Firstly, BlackBerry said that it had settled a patent dispute with Facebook. BlackBerry had filed a lawsuit alleging that Facebook’s WhatsApp and Instagram apps infringed on some of BlackBerry’s messaging patents, with Facebook retaliating, with its own suit accusing BlackBerry of infringing patents related to voice messaging. Although the terms of the settlement were not made public, it potentially removes some uncertainty for BlackBerry investors. Additionally, BlackBerry said that it had sold several patents covering mobile technology to China’s Huawei Technologies, giving shareholders a sense that BlackBerry’s portfolio of over 40k patents could be still valuable. 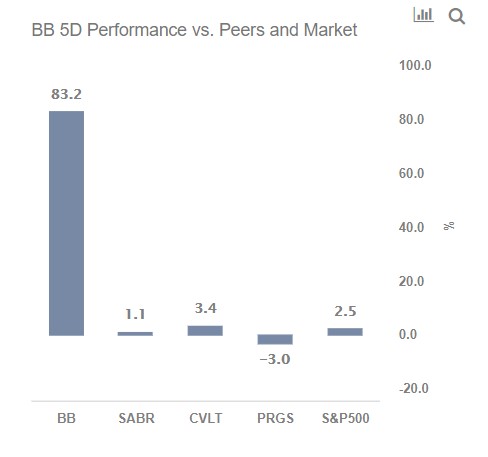 Are further gains in the cards for BlackBerry stock in the near-term? Not really. Per our machine learning model, which analyzes trends in the stock price over the last 5 years, BlackBerry stock has an over 90% chance of a decline over the next month (21 trading days). See our dashboard analysis Is BlackBerry Stock Poised For Further Gains? Even long-term investors should likely be cautious with BlackBerry stock at current levels.  BlackBerry market cap stood at about $10 billion as of Monday’s close, trading at roughly 10x projected 2022 Revenues. Although this is not a very expensive valuation in the context of software stocks in the current market, the fundamental picture looks very mixed for BlackBerry. BlackBerry has posted losses over the last seven quarters and Revenues have also largely moved sideways in recent years, despite its many acquisitions and investments in developing its security portfolio. The consensus projects revenue to decline by about 14% to $940 million in FY’2021 (FY ends February) and recover to about $1.02 billion in FY’2022. Without signs of consistent growth, we believe the stock doesn’t really justify its current valuation.

While BlackBerry stock may have surged, 2020 has created many pricing discontinuities which can offer attractive trading opportunities. For example, you’ll be surprised how counter-intuitive the stock valuation is for Apple vs Microsoft. Another example is Ansys vs Adobe. 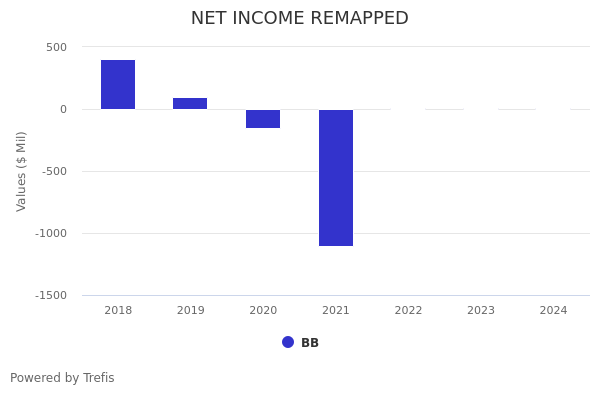