Seagate Technology (NASDAQ:STX) recently acquired Xyratex Ltd for $374 million. The news came at the end of the year which saw Seagate’s major competitor,  Western Digital Corporation (NASDAQ: WDC), acquiring a number of companies such as Virident, sTec and Velobit to bolster its SSD offerings. Seagate’s Xyratex acquisition targets enterprise storage which is likely to be a fast growing segment for the coming years.

In the last couple of years the demand for PC and laptops has declined. Personal computer shipments have slowed for five straight quarters, which is the longest period for sustained decline. This has directly affected the hard disk manufacturers in terms of PC hard drive units shipped. However, the global requirement of data is growing at an immense rate – almost doubling every two years. As more data moves towards cloud and users become increasingly dependent on network attached storage or the cloud, there is a growing demand for big data centers and enterprise storage. Major players in the storage industry such as Western Digital and Seagate aim to improve their solid state drive (SSD) portfolio with better offerings and look to target enterprise storage going forward.

Seagate’s stock rose by 75% this year and is currently trading at $56. The gain is attributed to a higher mix of high-margin SSD sales and a general shift away from traditional hard disk drives (HDDs). We currently have a $51 price estimate for Seagate which is 9% lower than the market price.

See Our Full Analysis On Seagate

Solid state drives have integrated circuit units that store data, unlike regular hard disk drives that have a rotating disk and a moving read/write head making them more prone to damage under physical shock. In addition, it is much faster to access and transfer data on the integrated circuit storage compared to a conventional rotating disk. The absence of moving parts also ensures that no noise is generated while using SSDs. Consequently, solid state drives consume less power than regular hard drives. All these reasons make SSDs a logical choice for replacing the traditional hard disk drives. Over the course of last few years, the significant growth in SSD numbers has contributed to a steep decline in SSD prices.

Despite better performance, SSDs are unlikely to completely cannibalize traditional hard disk drives (HDDs), mainly because of the huge price gap between the two. [1] In an attempt to deliver economical substitutes to more expensive SSDs, Western Digital recently announced the launch of its Helium-filled drive and its Black2 Dual Drive.  Seagate exploring the option of Shingled Magnetic Recording (SMR) drives which it will launch next year. Seagate’s long term plan also includes a Heat Assisted Magnetic Recorded Drive, highlighting a similar trend. [2] The Xyratex acquisition should enable Seagate to better test its SMR and HAMR drives.

Seagate’s major competitor, Western Digital, made key acquisitions in 2013 to boost its SSD sales. Close to end of this year, Seagate announced that it will acquire Xyratex for $374 million. The Xyratex acquisition benefits Seagate on two main fronts.

Firstly, Xyratex is the largest hard disk drive processing equipment supplier with a portfolio that includes disk processing, inspection and testing equipment. Prominent hard disk manufacturers like Western Digital and Toshiba also use Xyratex equipment for testing and inspection purposes. This gives Seagate some leverage and pricing power over its competitors, though it remains to be seen how they will use it. Xyratex has around 3 million test slots installed worldwide, with its Drive Processing Systems (DPS) enhancing factory yields for HDD manufacturers.

Secondly, Xyratex has a storage hardware business with its ClusterStor range of high performance computing (HPC) and cloud storage platform. Additionally, Xyratex also has an enterprise data storage business with the OneStor brand of products ranging from embedded storage to storage application products. Xyratex’s ClusterStor and OneStor range of products make it the largest OEM storage disk manufacturer in the world with a major client base such as Hewlett-Packard (NYSE:HPQ), Dell (NASDAQ:DELL) and NetApp (NASDAQ:NTAP). [3] Even though Seagate intends to operate the storage business separately to begin with, it gives Seagate’s customers a wider array of products to choose from.

With growing data requirement, the average capacity per drive is constantly increasing owing to a growing number of multi-terabyte (1 terabyte = 1000 gigabytes) drives. Hence the time required for testing of these drives is also increasing. According to Seagate, the acquisition will help streamline its supply chain and give it access to hard drive capital equipment which in turn should help Seagate reduce costs and improve margins. 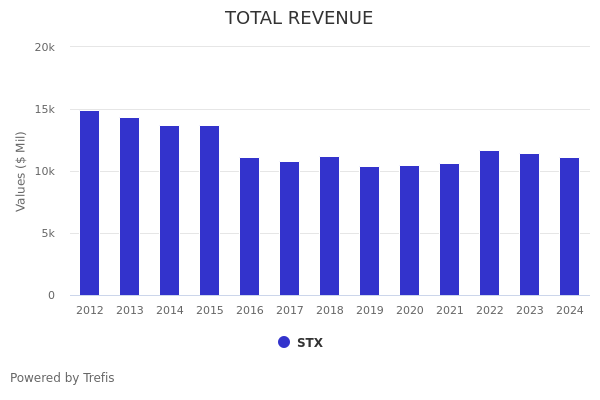 What Drove the 25.5% Net Income Change for Seagate Technology in FY2022?

Company Of The Day: EOG Resources