Coal prices have been in a tailspin since the beginning of the year. But now some industry players are calling for a rebound.

Don’t buy into it.

It might seem like a good contrarian play at the moment (and in the short term, maybe it is). But the long-term outlook is exceedingly bleak.

In other words, King Coal is dead – and it’s not coming back.

You see, coal essentially has two purposes: Thermal coal is burned to create electricity and coking coal is used to make steel.

The former is the big one. About 87% of the world’s total hard coal production is used for power.

Yet that’s where coal faces its stiffest competition.

Coal’s dirty and inefficient. So it’s being supplanted by other sources of energy – especially natural gas.

Natural gas has always been cleaner than coal, as it releases half the carbon dioxide emissions when it’s burned. But now it’s cheaper, too.

For that reason, power companies that once relied on coal are making the switch to natural gas. And they increased their use of the fuel by about one-third over the past year, according to Energy Department data.

This shift is occurring industry wide.

And power suppliers aren’t just switching for the cost savings, either. The truth is, most power plants were already transitioning to cleaner natural gas to reduce carbon emissions and comply with clean air laws. Lower prices just accelerated the change.

Since 2010, plant operators have announced 106 retirements of coal facilities – representing 13% of the U.S. fleet. And newer, tougher environmental regulations will ensure that no new plants are built to replace them.

In fact, plans to build as many as 15 new coal plants could be deterred by new carbon emissions standards, according to the Environmental Protection Agency.

That’s bad for coal, but good for the environment. With coal being shunned, carbon dioxide emissions from the fossil fuel sector are expected to decline 3% this year, compared to the 1.9% decrease in 2011.

Ultimately, the United States will consume 876 million tons of coal this year, according to the Energy Information Administration (EIA). That’s the lowest level since 1987. Yet the country will still produce 982 million tons of coal, which will just add to the current supply glut.

Still, many optimists believe that demand in emerging markets – especially China – will offset this decline and eventually lead to a resurgence in coal prices. But that’s unlikely.

To begin with, China’s economy isn’t growing nearly as fast as it once was. (That’s dampened the demand for electricity and steel, further exacerbating the decline in coal prices.)

And while China currently gets 80% of its power from coal, the country is fast tracking its natural gas program to duplicate the United States’ success.

China is home to the world’s largest deposits of shale gas. And if it develops those assets, it has the chance to reduce pollution, create jobs and become more energy independent…

That’s why it set a goal of producing more than 60 billion cubic meters of natural gas – about 10 times the current amount – by 2020. Recall, that’s why so many Chinese energy companies have been looking for overseas takeover targets.

Indeed, coal’s days in China are numbered, just like they are in the United States.

So do yourself a favor and avoid companies like Peabody Energy (NYSE: BTU), Alpha Natural Resources (NYSE: ANR) and even BHP Billiton (NYSE: BHP).

They have too much exposure to coal. And coal is the fuel of the 18th century, not the 21st. 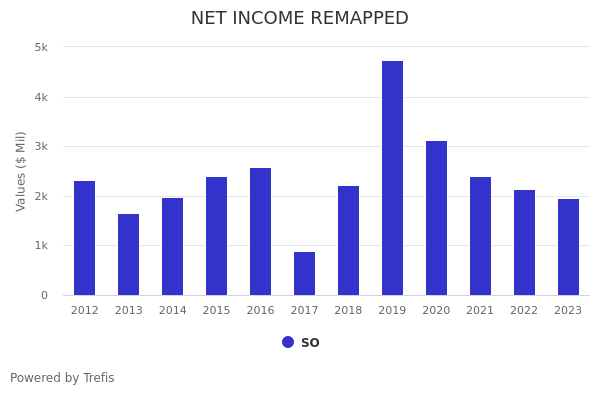 Better Bet Than SO Stock: Pay Less Than Southern To Get More From Sector Peers ES, NI, UGI, NRG