News Corp (NASDAQ:NWSA) recently reported its fourth quarter and full year fiscal 2015 earnings. [1] (Fiscal years end with June.)  Book publishing continued to see solid growth amid the benefits from Harlequin acquisition. The company management expects the book publishing business to drive growth in the near future and is optimistic about its current pipeline, spearheaded by Harper Lee’s Go Set a Watchman, which came out in July. [2] However, News and Information Services continued its downward spiral, given the challenging environment. As Internet penetration continues to expand, more and more free and abundant information is available online. This has resulted in a decline in the company’s subscriber base. Lower readership has in turn resulted in advertisers spending less and less on print ads. We believe this trend will continue in the coming years, which will keep putting a downward pressure on circulation prices in the near term.

We believe that the book publishing business will be a driver of growth for New Corp, experiencing strong demand in digital book sales in the long run due to the growth of e-book reading applications and devices such as the Kindle and Nook. Price Waterhouse Coopers also claims that e-book sales will exceed print sales by 2018 (see – How Are News Corp’s Book Publishing Operations Trending?) [3]. It must be noted that digital books have lower production and distribution costs as compared to print books and this will help the company see higher margins in the coming years. Digital sales accounted for 22% of overall revenues for fiscal 2015. Overall book publishing revenues grew 8% to $390 million for the quarter and 16% to $1.67 billion for the whole fiscal year. [4] Strong backlist sales in the general books category helped boost revenues and the company benefited from the continued success of Chris Kyle’s American Sniper. The strong demand was able to compensate for the gradual weakening in demand for Veronica Roth’s Divergent series. The company sold only 8.3 million units of Divergent series in the fiscal year ended June 30, 2015 as compared to 19.2 million units sold in the prior year. The solid segment performance was also helped by News Corp’s 2014 acquisition Harlequin, which contributed $281 million towards full year sales. [4]

While the company’s digital media assets are growing, they are not able to offset the declines seen in the news and information print media. Moreover, the growth of the Internet gives users the access to free and abundant information online, thereby making print media less lucrative for advertisers. Even the company’s strong brands, such as The Wall Street Journal and Barron’s, are witnessing lower advertising revenues (down 10% for the fiscal year 2015). [4] Given these trends, we expect the segment revenues to continue to decline in the near term and stabilize in the long run, driven by growth in digital sales. The company is trying to reduce its reliance on advertising income, which will provide a stable growth outlook in the long run.

Looking at fiscal 2015 results, News and information services revenues declined 7% to $5.73 billion, led by a weakness in the print advertising market coupled with a 10% decline in advertising income. [4] While the decline in advertising was across geographies, Australia and UK appear to be in worse shape than the U.S. [2] Segment EBITDA declined 9% to $603 million primarily due to lower advertising revenues, unfavorable foreign currency rates and higher legal expenses at News America Marketing. [4] Looking at fiscal 2016, the company management expects currency headwinds to continue. 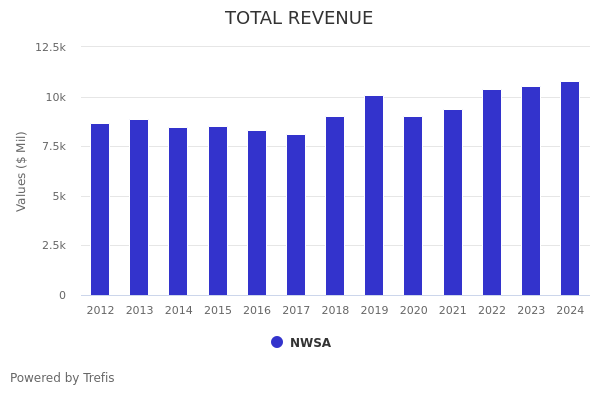 Is Philip Morris Stock A Better Pick Over Its Sector Peer?

Where Is American Express Stock Headed?

Should You Buy Universal Health Services Stock At $133?

What To Expect From Salesforce Stock In Q3?