VeriSign (NASDAQ:VRSN), primarily known as the authoritative registry for .com and .net generic top-level domains, also operates a diverse array of network infrastructure, including two of the Internet’s thirteen root nameservers and the back-end systems for the .gov, .jobs, and .edu top-level domains. It also offers a range of security services, including managed DNS, Distributed Denial of Service (DDoS) mitigation and cyber-threat reporting.

It has exercised singular control over the registry for .com and .net domain names for over a decade. Recently, the company renewed its agreement with ICANN (Internet Corporation for Assigned Names and Numbers) which extends its rights over the domain names for another six years. We currently estimate a 90% share of .com & .net domain names in our valuation of VeriSign.

The company recently renewed its agreement with ICANN which enabled it to retain the rights over the .com and .net domain names for another six years. The renewed agreement allows for a price hike of 7% in any of the four years of the six year agreement for both the domain names. The agreement for .name domain is up for renewal soon and similar terms are expected in the new agreement. The company reported higher growth in domain name renewals in the first quarter which is inline with history. The company released its Q2 earning last month.

Currently, Verisign charges $7.85 and $5.11 for .com and .net domain names, respectively. With scope for additional price hikes, we expect the Verisign fee to increase from our current estimate of $7.05 to almost $9 by the end of our forecast period.

There are over 141 million generic TLDs (Top Level Domains) currently registered according to Whois. ‘.com’, the most popular generic TLD has a market share (among gTLDs) of almost 74% while .net, the second most popular has the approx. 10%. Both of these figures have stayed in the same range over the past decade. However, the share of gTLDs among all domain names has fallen gradually from a high of approximately 75% in 2000 to the approximately 50% currently.

With businesses increasingly moving towards other domains inline with the countries (.in, .au, .de, .cn, etc) that they operate in or to other gTLDs (.biz, .org, etc), we expect the market share of .com and .net domains among all domain names to fall from the current levels of almost 50% to 45% by the end of our forecast period. During the forecast period, we expect the margins from .com and .net registry business to stay constant as the permitted price hikes kick-in. These should help offset increased costs associated with inflation and investment in operations. 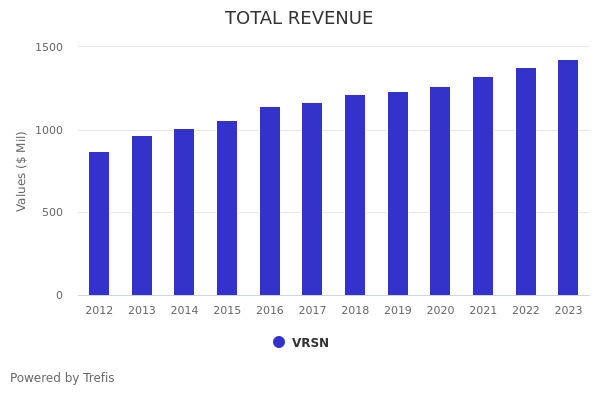 Why Verisign CA Stock Moved: VRSN Stock Has Gained 36% Since 2018 Primarily Due To Favorable Change In Revenues

Better Bet Than VRSN Stock: Pay Less Than Verisign CA To Get More From Stocks ABT, LOW, UPS, NOC, COP

Verisign Stock Has Underperformed Despite Steady Sales Growth – Here’s Why