Paramount Global stock (NASDAQ: PARA) remains down by about 36% year-to-date, considerably underperforming the S&P 500 which remains down by about 16% over the same period. Investors have soured on Paramount as it doubles down on building its streaming operations, investing heavily in content and marketing, just as the big Covid-19 tailwind of sheltering at home eases, while competition also mounts. Paramount also posted a weaker-than-expected set of Q3 2022 results earlier this month. Revenue rose 5% year-over-year to $6.9 billion, although it fell short of estimates. While the direct-to-consumer business continued to expand, year-over-year growth rates have slowed to about 38% from about 56% in the year-ago period. Moreover, the TV media business, which counts as the company’s largest business, saw advertising revenue decline, amid economic headwinds and foreign currency issues. Profits have also taken a hit as Paramount boosts spending on content and marketing for its streaming business while seeing a decline in profits from content licensing. The company’s adjusted EPS declined by almost 49% year-over-year to $0.39 over Q3.

However, despite the tough results, we think that Paramount stock looks quite attractive at current levels of under $20 per share. Paramount stock trades at under 10x consensus 2022 earnings, which are being depressed by its current streaming-related spending. However, we believe that earnings have considerable potential to increase in the coming years, given the long-term monetization prospects of the streaming business. For example, earlier this year, Paramount raised its 2024 direct-to-consumer revenue target from $6 billion to $9 billion. Moreover, Paramount can monetize its new content investments via a mix of television, theatricals, and streaming helping it to boost its returns compared to players such as Netflix which are purely streaming-focused. Paramount might also be an acquisition target, for larger streaming platforms and technology companies looking to enter the media space given its currently reasonable valuation (market cap of roughly $12 billion) and its iconic franchises. Value investors are also showing more interest in the stock. Warren Buffett’s Berkshire Hathaway recently increased its stake in the company, currently holding about 15% of Paramount’s Class B shares. See our analysis on Paramount Global Valuation: Expensive Or Cheap for more details on Paramount’s valuation. We value Paramount stock at about $26 per share, about 41% ahead of the current market price. Check out our analysis of Paramount Global Revenue for a closer look at the company’s business model and key revenue streams. 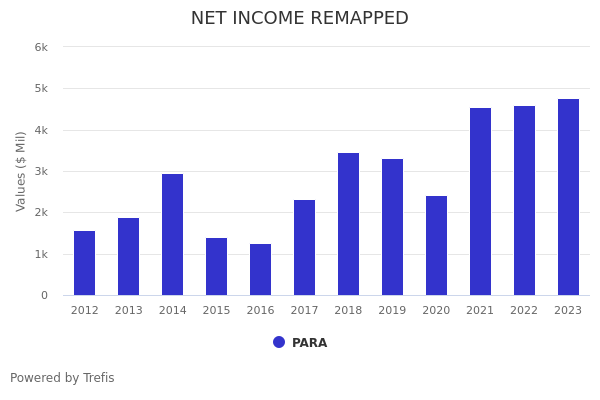 What Drove the 87.6% Net Income Change for Paramount Global in FY2021?

Paramount Global During 2008 Recession vs. Now: PARA Stock Has 79% Upside If It Recovers To Pre-Covid Levels

Is Paramount Global Stock A Buy?

Will Paramount’s Streaming Push Help Or Hurt Its Stock?

Paramount Global’s Revenue Growth Is Picking Up. Is The Stock A Buy?

Here’s A Stock Which Looks Better Than ViacomCBS

Why Did ViacomCBS Stock Jump More Than 5% In A Week?

Where Is ViacomCBS Stock Headed After Almost 50% Value Erosion?