Sports giant Nike (NYSE:NKE) has shown solid growth momentum in the past few quarters, which has resulted in more than 50% increase in its stock price year to date. The performance has been underscored by broad based growth across geographies (excluding China and Japan) and different product categories. In this article, we look at how Nike stacks up along Porter’s Five Forces, to analyze where it could gain or lose going forward.

According to our analysis, competitive rivalry within the industry is a key force which has the potential to curtail Nike’s growth. The competition is increasing from both established, as well as upcoming and local sports-apparel and footwear companies. In case Nike is unable to adapt to changing trends, its growth could be impacted. The company relies heavily on wholesale channel and big wholesale customers could exert leverage to attain higher product discounts/ better credit terms. The low barriers to entry in the Internet retailing business could enhance the competition in the industry. Also, Nike needs to address the problem of counterfeit products to dilute the threat from small players.

See our complete analysis for Nike

Threat Of New Entrants – Requirement for high capital and research investments could limit the entry of new players; however, there is a threat from new e-commerce players

Our $63.18 price estimate for Nike, represents almost 20% downside to the current market price. 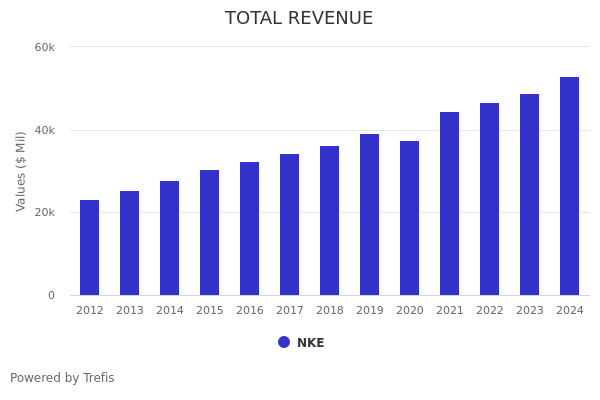