Amazon‘s (NASDAQ:AMZN) shares rose 4% on February 13 after an analyst note fueled further optimism about the company’s Kindle e-book business. Amazon’s Chief Executive Jeff Bezos noted in the fourth quarter 2012 earnings results that e-books are a multi-billion category for Amazon and grew at approximately 70% y-o-y in 2012. In contrast, the physical book sales registered their lowest December growth in 17 years at about 5%. Morgan Stanley’s Scott Devitt estimates that the e-book market is a lot bigger than previously thought and that owners of Kindle e-readers and tablets are reading more e-books. [1] He estimates worldwide e-book unit sales to have reached 859 million in 2012, up considerably from a previous estimate of 567 million. Leading research firm Forrester Research estimates that the U.S. e-book market will reach $13.6 billion by 2017. [2]

We believe that Amazon, with its Kindle e-reader, low prices for e-books and self published books, will be the biggest gainer from the expected growth in the e-book market which will further solidify its position. Here, we take a look at how the company can further expand its dominant position in this market.

A Secondary Market For eBooks

We recently wrote an article about how Amazon won a patent that will allow online customers to sell or trade digital items with other users. These digital items include e-books as well. The company’s current library of e-books can be accessed through its Kindle range of e-readers and tablets as well as other devices based on iOS and Android platforms. We believe that a secondary market would enable Amazon to generate revenues multiple times from a product sale instead of one-time.

Amazon currently generates about 30% of its revenues from media sales with a significant portion coming from online media. A secondary market can provide a substantial upside to revenues from media sales as Amazon is likely to earn a commission on every secondary market transaction. Currently, Amazon’s broader strategy is to sell mobile devices at or near cost and make money when consumers use the gadgets to buy digital content, including e-books, music, videos, apps and games. A secondary market for digital items will function as an extension of the current strategy.

Most e-books developed presently are mostly text with some illustrations or pictures thrown in. Software developer and e-book seller Inkling has developed a tool that can make pictures come to life through fast moving sequence of photos. (Think GIF image files and The Daily Prophet newspaper from the Harry Potter movie franchise) [2] Many online magazines and newspapers have created interactive interfaces, embedding features such as slideshows and videos into webpages; however, ebooks have lagged behind in this aspect. We believe that Amazon can take lead over Apple by developing software for the Kindle range which can support such features. Currently, ebooks sold through the iTunes store also lack interactive features.

Traditionally, pictorial books (hard copy) have been more expensive on account of greater interactive content. This trend might continue in the ebook space by charging a premium for the unique, high-end interactive experience. Amazon’s margins on ebooks are higher than on some of its other services and interactive e-books can charge even higher margins. An interactive interface in books is relevant across genres as varied as educational books for children to cook books/ how-to guides, etc. We expect that a greater utility of e-books and popularity of the Kindle platform to support volumes, which will further help Amazon’s revenue growth.

We have a $235 Trefis price estimate for Amazon which is 15% below the current market price.

With Holiday Shopping Off To A Decent Start, Are Digital Commerce Stocks Worth A Look?
Visualize Related Companies:
Amazon , Apple , Alphabet 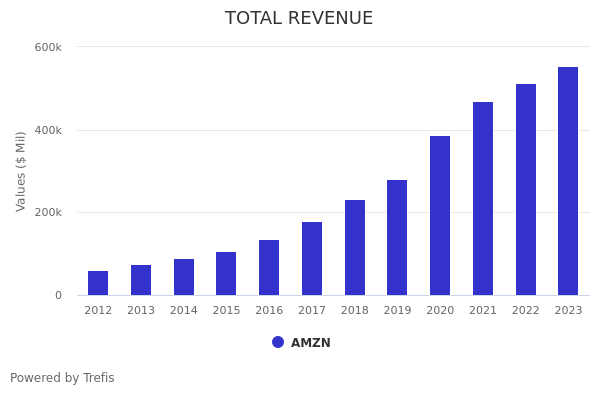 Better Bet Than AMZN Stock: Pay Less Than Amazon To Get More From Industry Peer ETSY

Better Bet Than AMZN Stock: Pay Less Than Amazon To Get More From Sector Peers TSLA, HAS, CROX, CZR, LAD

Amazon Underperformed The Revenue Consensus In Q3, What’s Next?

What To Expect From Amazon Stock?