We think that Anthem (NASDAQ:ANTM) currently is a better pick compared to UnitedHealth Group (NYSE:UNH). ANTM stock trades at about 0.8x trailing revenues, compared to around 1.5x for UnitedHealth. Does this gap in Anthem’s valuation make sense? We don’t think so. While both the companies have benefited in the pandemic with an overall increase in Medicaid membership, ANTM stock is being weighed down over its rising operating expenses as well as benefit cost ratio (ratio of medical costs to premiums).

However, there is more to the comparison. Let’s step back to look at the fuller picture of the relative valuation of the two companies by looking at historical revenue growth as well as operating income and operating margin growth. Our dashboard Anthem vs. UnitedHealth Group: ANTM stock looks undervalued compared to UNH stock has more details on this. Parts of the analysis are summarized below.

Our UnitedHealth Group Revenues dashboard summarizes the segment-wise breakup of the company’s revenues. Looking at the last twelve month period, Anthem has seen revenues change by 14.2%, higher than the figure of 6.2% for UnitedHealth.

The Net of It All

Although UnitedHealth’s operating margins compare favorably with Anthem over the recent years, Anthem’s revenue growth has comparatively been higher. Although both the companies are benefiting from increased Medicaid enrollments, especially in 2020, due to the impact of the Covid-19 pandemic, ANTM stock has been weighed down over investors concerns of rising expenses.

Going by consensus estimates, Anthem’s total revenue is expected to grow 12% in 2021, better than the 9% growth expected for UnitedHealth. Now that over half of the U.S. population have received at least one dose of Covid-19 vaccine, the U.S. economy is expected to rebound, which will result in an increase in commercial businesses for both the companies, and also help retain the margins, despite an expected rise in medical costs, given that the volume of elective surgeries is likely to rise.

Now, given that Anthem has seen better revenue growth both in the long run as well as over the last twelve months, and this trend is expected to continue going forward, we think the difference in P/S multiple of 0.8x for Anthem versus 1.5x for UnitedHealth will likely narrow going forward in favor of the less expensive ANTM stock.

While Anthem appears to currently be a better investment than UnitedHealth, it is helpful to see how its peers stack up. Anthem Stock Comparison With Peers summarizes how Anthem compares against peers on metrics that matter. You can find more such useful comparisons on Peer Comparisons. 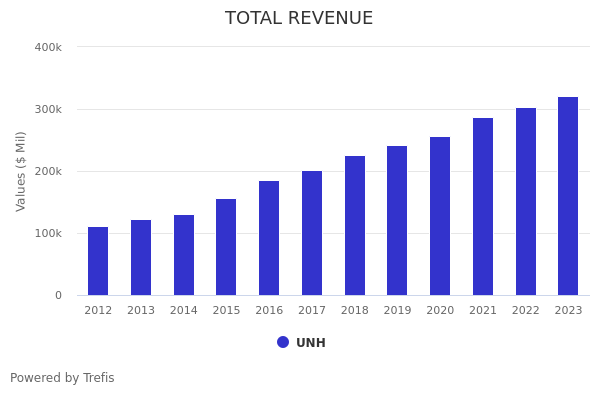 Does UnitedHealth Stock Have More Upside?

This Health Insurance Company Is A Better Pick Over UnitedHealth Stock

After Seeing Lower Levels In January, Is UnitedHealth Stock Now A Buy?

What To Expect From UnitedHealth Stock As It Reports Q4 Results?

Is UnitedHealth Group Stock Fully Valued At Its Current Levels of Around $500?

Company Of The Day: UnitedHealth

What To Expect From UnitedHealth’s Q3?