Per Q1 filings, Occidental Petroleum (NYSE: OXY) still has $2-3 billion of assets remaining to divest and ease cash flows for shareholder returns. The company incurred $10 billion of asset impairment charges last year and slashed its asset base by almost 25%. However, the recent surge in benchmark prices has been pushing OXY stock higher despite concerns of continued demand crunch and easing of OPEC+ supply curbs during the latter half of the year. Currently, the company has not completely reinstated the dividend as the first quarter operating cash just met the capital expense target. Moreover, the $36 billion of long-term debt, more than the stock’s current market value, is another factor weighing on long-term capital gains. Thus, broader macroeconomic factors coupled with high leverage are expected to be a drag on investor returns. Our interactive dashboard analysis highlights Occidental Petroleum’s stock performance during the current crisis with that during the 2008 recession.

In contrast, here’s how OXY and the broader market performed during the 2007/2008 crisis.

Huge debt pile is a drag on shareholder returns

Occidental Petroleum’s revenues declined by 14% from $18.9 billion in 2018 to $16.3 billion in 2020 as the pandemic led to a slump in demand and drove down benchmark prices. The Anadarko acquisition loaded OXY’s balance sheet with $28 billion of long-term debt in 2019. Thus, the annual interest expenditure of more than $1 billion is weighing on shareholder returns. Moreover, the slump in oil demand slashed OXY’s asset base by 25% as the company incurred $11 billion of impairment charges in 2020. Improvement in the company’s finances depends on the successful execution of the asset divestiture plan and an improvement in operating cash flows.

While the company plans to maintain a prudent capital investment plan along with divestitures, Trefis believes that the stock could face another downside as benchmark prices observe a correction from rising OPEC+ production during the latter half of the year.

Is Exxon Mobil a better pick over Occidental Petroleum? Check out Exxon Mobil Stock Comparison With Peers to see how XOM compares against peers on metrics that matter. You can find more such useful comparisons on Peer Comparisons. 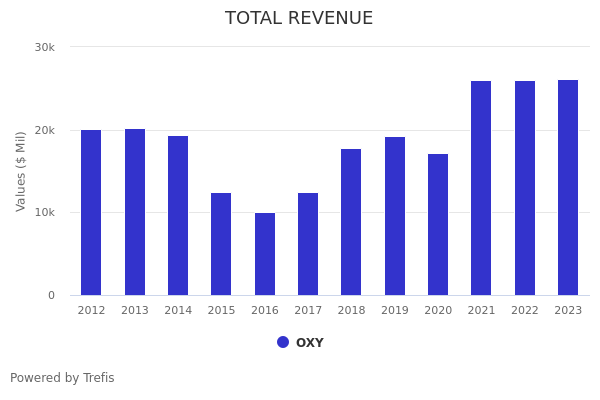 American Express Stock Topped The Street Expectations In Q1, Is It Fairly Priced?

What Makes DexCom Stock A Better Pick Over This Insulin Pump Maker?

Earnings Miss In The Cards For American Eagle Stock?

What To Expect From Gap’s Stock After Q1?

MetLife Stock Lost Almost 2% In One Week, Is It A Buy?

AT&T Stock Has Outperformed In 2022. Still A Good Buy?