American International Group, Inc. (NYSE:AIG) is a leading provider of Property & Casualty Insurance, Life Insurance, Group & Individual Retirement products, bank-owned life products and Mutual Fund services. Trefis has a price estimate of $57 for AIG’s stock which is roughly 5% higher than its current market price. Our price estimate takes into account AIG’s earnings release for the third quarter earlier this month. For Q3, AIG reported total revenues of $12.9 billion, up 12% y-o-y primarily due to a sharp increase in net realized capital gains. However, the net income figure of $646 million for the quarter was below market expectation.

AIG’s business model faces stiff challenges and competition from offerings by its competitors such as Travelers, Prudential Financial, New York Life and Hartford Financial Group (HIG) among others. We have compared trends across revenue streams for AIG vs The Hartford over the last 4 years in an interactive dashboard, and also include our forecast for 2019. AIG has higher revenues and a much more diversified business model compared to its peer. Further, it has maintained its lead primarily due to notably higher General Insurance revenues.

AIG has higher revenues and a more diversified business model, but it is growing at a slower rate than HIG

Our interactive dashboard for AIG’s revenues details what is driving changes in revenues of AIG’s individual revenue streams, along with our forecast for the full year 2019

AIG earns notably higher General Insurance Premiums, although this revenue stream is also much more volatile for the company compared to the Hartford

Additional details about how Life Insurance Premiums and Operating Margin for AIG compare with that for the Hartford are available in our interactive dashboard.

Per Trefis, AIG’s Revenues (shows key revenue components) are expected to cross $49.7 billion in 2019 – leading to an EPS of $4.70 for the year. This EPS figure coupled with a P/E multiple of 12.2x, works out to a price estimate of $57 for AIG’s stock (shows cash and valuation analysis), which is 5% higher than the current market price.

What’s behind Trefis? See How It’s Powering New Collaboration and What-Ifs
For CFOs and Finance Teams| Product, R&D, and Marketing Teams
All Trefis Data
Like our charts? Explore example interactive dashboards and create your own. 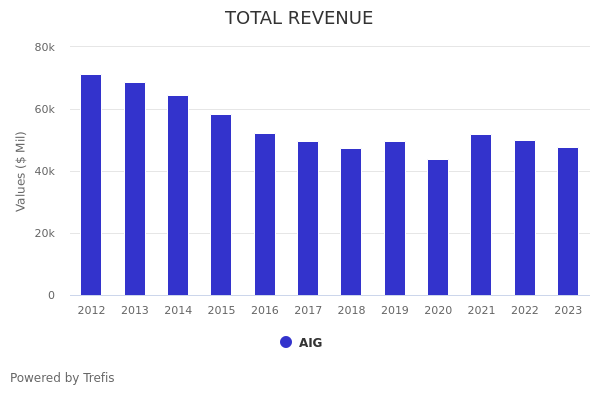 What Drove the -257.9% Net Income Change for American International Group in FY2021?

AIG Stock To Miss The Consensus In Q4?

Which Insurance Giant Is Growing At A Faster Rate: AIG or HIG?

Can AIG Arrest The Steady Decline In Its Top Line?