Zynga (NASDAQ:ZNGA) is the world’s largest social gaming company with more than 230 million active users. It competes primarily with Electronic Arts (NASDAQ:EA), Playdom which was recently acquired by Disney (NYSE:DIS) and other independent social gaming studios. Though Zynga is present on multiple social and mobile platforms, most of its revenue is generated through Facebook, the largest social network in the world with over 800 million users. Zynga announced last year that it would launch its own platform, Zynga Direct, to host its games enabling users to play directly on its platform. It recently unveiled the Zynga Platform and zCloud, its own cloud infrastructure platform for social game developers. [1]

The new Zynga platform is focused exclusively on social games, and Zynga will make most of its popular titles such as Words with Friends, CastleVille, Zynga Poker, Hidden Chronicles and CityVille available on it soon. It will also allow other game developers use its platform and API to host their own games, and extend the reach of their games using Zynga’s vast cross marketing opportunities.

The Zynga Platform will come with a live social stream that will enable users to see which games their friends are playing, and allow them to interact with them, thereby increasing player engagement. The platform is scalable and will allow other game developers to market their games across Zynga’s vast user base. If the Zynga Platform takes off, it could become a major revenue source for the company going forward.

Zynga also hopes to reduce its dependence on Facebook, which currently accounts for a major portion of its revenues. The Zynga Platform will use Facebook Connect to gain initial traction, and will continue to use Facebook Credits as the mode of payment. However, as Zynga gains enough scale, we expect it to move to its own payment infrastructure and capture a greater portion of online gaming spend on its platform, which could boost its overall revenue significantly.

We currently have a $13 Trefis price estimate for Zynga, which stands nearly 10% below its current market price. New games account for almost half of its total value. 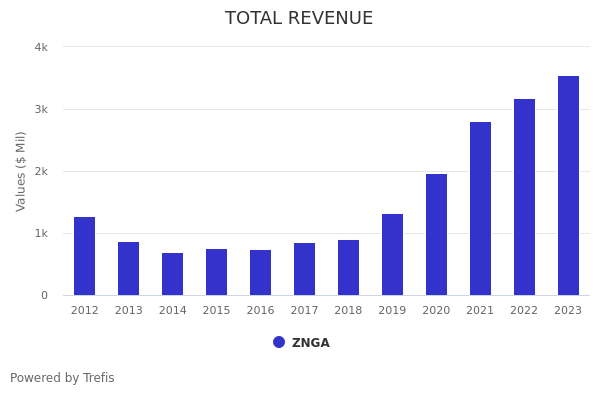