Yelp (NYSE:YELP) is one of the largest online local business search, review and recommendation service, which enables consumers to access ratings, and read reviews and opinions about local businesses like hotels, restaurants, salons, dentists and mechanics on their website. It competes primarily with other online business review services like Google (NASDAQ:GOOG) Places, Yahoo (NASDAQ:YHOO) Local, Angie’s List, CityLocal and Gumtree; display advertising players like Google, Yahoo, Facebook and AOL (NYSE:AOL); and daily-deal sites like Groupon (NASDAQ:GRPN) and LivingSocial.

Yelp enables local businesses to advertise on its website through fixed-fee advertising plans. It offers promotional features like enhanced profile pages with videos, sponsored search results and performance based advertising to generate leads and drive traffic to local businesses for a fixed monthly fee. Local advertising generates a majority of its revenue – more than 70% in 2011 – while display advertising, daily deals and other services account for the remainder.

We expect it to continue to generate increasing amounts of revenue for Yelp in the coming years.

Here are the two major factors which will drive the growth in Yelp’s local advertising revenues in the coming years.

Targeted local advertising is one of the best ways for local businesses to attract intent-driven consumers actively searching for products and services in their city. Active Local Business Accounts are the average number of businesses which signed up for Yelp’s local advertising offerings and contributed to Yelp’s revenue. The average number of active local businesses in 2011 was 17,500. We expect it to increase steadily throughout the forecast period, approaching around 92,000 by 2018.

This rise in local advertising revenues will be driven primarily by Yelp’s rapid expansion into new markets. Yelp expanded its reach to 71 markets in United States, Canada, Europe and Australia by the end of 2011, up from 49 in 2010. It now offers information on more than 600,000 local businesses in these markets. It attracted close to 58 million average monthly visitors to its platform in 2011. As it starts attracting more consumers from each of its existing and new markets, we expect a proportional increase in local advertising revenue.

Yelp generated around $3,750 in average local advertising revenue per active local business in 2010. However, the number declined to around $3,340 in 2011. Going forward, we expect it to decline further throughout the forecast period.

We currently have a $9.30 Trefis price estimate for Yelp. Local advertising accounts for 64% of its overall value while brand advertising and other services like Yelp Deals account for the remainder. 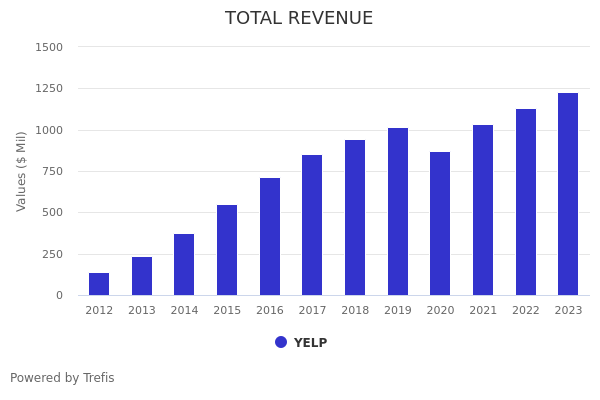