Wells Fargo’s stock (NYSE: WFC) has gained around 50% YTD, and at its current price of $45 per share, it is trading marginally below its fair value of $46 – Trefis’ estimate for Wells Fargo’s valuation. WFC, the mortgage banking giant, announced on 28 June that it has completed the 2021 Comprehensive Capital Analysis and Review (CCAR) stress test process. Notably, CCAR is an annual exercise by the Federal Reserve to assess the capital requirement of banks in the U.S to continue operations throughout times of economic and financial stress. Due to the Covid-19 crisis, the Fed imposed some restrictions on dividends and share buybacks by the 23 large banks last year. However, it cleared all 23 banks tested in its annual stress exercise last week. As a result, WFC expects to double its common stock dividend to $0.20 per share from the third quarter of 2021. Further, it will buy back around $18 billion worth of common stock over the next four quarters, as part of its share repurchase plan starting the third quarter. That said, the capital plan is subject to approval by the Company’s Board of Directors in July.

Wells Fargo’s revenues of $72.3 billion for the full year 2020 were down 15% y-o-y, mainly driven by lower net interest income (NII). The NII, which generates more than 50% of the total revenues, suffered due to a lower interest rate environment and a drop in outstanding loan balance. The same trend continued in the first quarter of FY2021 as well, with the bank posting a 22% y-o-y drop in its NII. However, it witnessed a 45% y-o-y growth in non-interest income, which was able to offset the negative impact of lower NII. Moving forward, we expect the non-interest income to continue its growth momentum. Further, loan balances are likely to improve with recovery in the economy, although interest rates are likely to remain below the pre-Covid-19 levels for some more time. Overall, Wells Fargo’s revenues are likely to remain around $71.3 billion in the year. Additionally, the bank’s profitability figures are likely to receive a big boost in the year due to a favorable decrease in provisions for credit losses. We expect the bank’s EPS figure to increase from $0.42 to $2.87 in FY2021, which coupled with the P/E multiple of close to 16x will lead to a valuation of roughly $46.

Wells Fargo’s stock (NYSE: WFC) has rallied 83% since the March 23 lows of last year and has gained 53% YTD. Further, at its current price of $46 per share, it is trading at the same level as its fair value of $46 – Trefis’ estimate for Wells Fargo’s valuation. WFC, the largest mortgage banker in the United States, reported better than expected earnings in its recently released first-quarter FY2021 results. It posted revenues of $18.1 billion – 2% more than the year-ago period. This could be attributed to a 45% increase in non-interest income, mainly due to stronger mortgage production results, improved trading, and higher investment banking fees. The growth was almost offset by a 22% drop in net interest income due to the lower interest rate environment and a drop in outstanding loans. Notably, the bank released $1.05 billion of loan loss reserve in the quarter, signaling some improvement in the perceived loan default risk of its customers.

Wells Fargo reported revenues of $72.3 billion for the full year 2020 – down 15% y-o-y. The bank holds a sizable portfolio of outstanding loans – $396 billion in community banking, $196 billion in commercial banking, and $255 billion in corporate & investment banking (as per 2020 figures). This makes it very sensitive to movement in interest rates, which suffered into 2020 due to the zero rate policy of the Federal Reserve due to the impact of the Covid-19 crisis – WFC’s net interest margin (NIM) declined by 46 basis points to 2.27% in the year. This negatively impacted the net interest income (NII) of the bank, which derives close to 55% of the total revenues – NII dropped by 16% y-o-y to $39.8 billion. The impact on NII was further amplified by a decline in outstanding loan balance due to lower consumer demand and higher prepayments. Further, its non-interest income fell 14% y-o-y mainly due to lower net gains on equity securities and lower card fees due to a drop in consumer spending levels. That said, as the economic conditions improve, the consumer spending levels are likely to recover, benefiting both NII and non-interest revenues. However, the low interest rates are unlikely to see a swift revival to the pre-Covid-19 levels. Overall, Wells Fargo’s revenues are likely to be around $71.3 billion in FY 2021 – slightly lower than the 2020 figure. Notably, the bank’s sales & trading and investment banking operations are significantly smaller as compared to its peers, both businesses which saw unprecedented growth in 2020 driven by higher trading volumes and a jump in underwriting deals.

The bank’s profitability figure suffered in 2020 – adjusted net income declined by 90% y-o-y to $1.7 billion, reducing the EPS from $4.08 to 0.42. This could be attributed to two factors – first, build-up in provisions for loan losses from $2.7 billion to $14.1 billion in the year; second, increase in total operating expenses as a % of revenues from 68.4% to 79.7% due to higher restructuring charges and higher expenses for litigation and customer remediation accruals. The bank increased its provisions in 2020 to compensate for the higher risk of loan defaults. However, it has released some of its loan reserves in the last quarter. Further, as the economy recovers and more and more people receive the Covid-19 vaccination, its provisions are likely to decrease. We expect the bank’s EPS figure to increase to $2.87 in FY2021. Overall, the EPS of $2.87 coupled with the P/E multiple of around 16x will lead to a valuation of around $46.

After a meager growth of around 20% since the March bottom, Wells Fargo stock (NYSE: WFC) is still down more than 40% YTD. Trefis estimates Wells Fargo’s valuation to be around $29 per share – slightly below the current market price. Wells Fargo, the largest mortgage banker in the United States, with a sizable loan portfolio of around $399 billion in community loans and $456 billion in commercial loans (as per 2019 data), is very sensitive to changes in interest rates. In its recently released third-quarter results, Wells Fargo posted revenues of $18.86 billion – 14% lower than the year-ago period. This could be attributed to a 5% y-o-y drop-in community banking followed by around 19% decline in the wholesale banking segment. While the lending industry has suffered due to the Federal Reserve’s zero-rate policy in response to the Covid-19 pandemic, the bank has faced additional hurdles due to its limitation to handle loan defaults and extend credit lines due to the Fed Asset restrictions (as compared to its peers). However, these asset growth restrictions are expected to be lifted soon.

We expect Wells Fargo’s revenues to see a slight growth in the last quarter results, mainly driven by some improvement in the community banking segment. It is likely to report $72 billion in revenue for FY 2020 – 15% below the year-ago figure. Further, its net income margin is expected to drop from 21.1% in 2019 to 3.1% in the current year due to a significant build-up in provisions for credit losses, reducing the EPS figure to $0.53 for FY 2020. Thereafter, revenues are expected to marginally decline to $71.9 billion in FY2021. However, the EPS figure is likely to improve to $2.04 due to a favorable decrease in provisions for credit losses. This coupled with the P/E multiple of around 14x will lead to a valuation of $29.

This can be attributed to two factors:  The Covid-19 outbreak and economic slowdown meant that market expectations for 2020 and the near-term consumer demand plummeted. This could negatively affect businesses and individuals, impacting their loan repayment capability and exposing Wells Fargo to sizable loan losses. While the multi-billion-dollar Fed stimulus provided a floor and several of Wells Fargo’s peers benefited from it, the same was not true for the bank due to a relatively smaller presence in sales & trading and investment banking businesses.

However, we think investors remain over-cautious about Wells Fargo’s stock

Trefis estimates Wells Fargo’s valuation to be around $31 per share – about 15% above the current market price – based on an upcoming trigger explained below and one risk factor.

The trigger is an improved trajectory for Wells Fargo’s revenues over the second half of the year. We expect the company to report $73.2 billion in revenues for 2020 – around 14% lower than the figure for 2019. Our forecast stems from our belief that the economy is likely to open up in Q3. The easing of lockdown restrictions in most of the world is likely to help consumer demand, resulting in higher business spending. Wells Fargo has a relatively smaller presence in investment banking and the Sales & Trading space as compared to its peers. As a result, it has not benefitted from a jump in trading volumes in the securities market and higher underwriting deals after the Fed stimulus. Overall, we see the company reporting an EPS of around $0.74 for FY2020.

Thereafter, Wells Fargo’s revenues are expected to improve to $74.4 billion in FY2021, mainly due to improvement in consumer banking and commercial lending revenues. Further, the net income margin is likely to improve as compared to the previous year due to a decline in provisions for credit losses, leading to an EPS of $2.63 for FY2021.

Finally, how much should the market pay per dollar of Wells Fargo’s earnings? Well, to earn close to $2.63 per year from a bank, you’d have to deposit about $285 in a savings account today, so around 110x the desired earnings. At Wells Fargo’s current share price of roughly $25, we are talking about a P/E multiple of just below 10x. And we think a figure closer to 12x will be appropriate.

That said, Banking is a risky business right now. Growth looks less promising, and near-term prospects are less than rosy. What’s behind that?

Wells Fargo originates and services the largest number of mortgages in the USA. Further, it has a huge portfolio of consumer, commercial, and wealth management loans – around $932 billion in FY2019 with roughly $320 billion in outstanding mortgages. The economic downturn could negatively affect the loan repayment capability of its consumers, exposing the bank to significant loan defaults. As a result of this exposure, the bank has increased its provisions for loan losses to around $13.5 billion by Q2 2020– roughly 10x of the year-ago period, leading to a huge spike in total expenses for the year. If the economic condition worsens, this figure could further increase in the subsequent months. Additionally, a negative economic outlook will make it expensive for the bank to attract funding, increasing the cost of its operations.

The same trend is visible across Wells Fargo’s peer – Bank of America. Its core banking revenues are likely to suffer in FY2020 due to a lower interest rate environment. Further, its margins are likely to drop due to build-up in provisions for credit losses in anticipation of bad loans. However, unlike Wells Fargo, positive growth in its trading arm and investment banking business in FY2020 would more than offset the weak core banking revenues. This would explain why Bank of America’s stock currently has a stock price of over $24 but looks slated for an EPS of around $2.43 in FY2021 (for a P/E multiple of nearly 12x).

Think Bitcoin could disrupt the banking industry? Looking for upside from Bitcoin adoption, without buying into the cryptocurrency itself? You can find more about our theme on Cryptocurrency Stocks here. 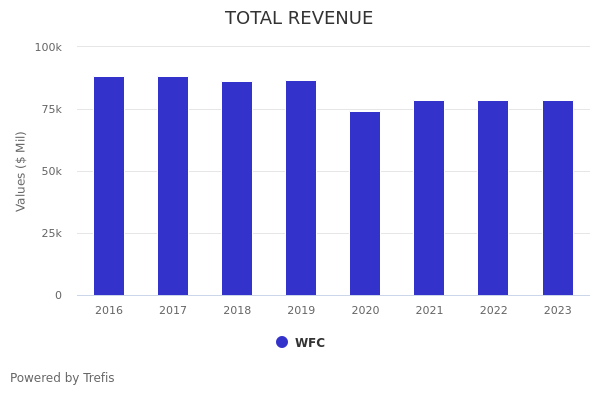