ViacomCBS stock (NASDAQ: VIAC) has lost almost half of its value in just the last three months as the stock dropped from $80 to $42 currently. The market had been over enthusiastic about the stock since the beginning of 2021 due to its effort of transforming to a streaming giant from a traditional cable media company. However, this enthusiasm was short-lived. The management decided to take advantage of the boom in the stock price by offering additional shares to raise close to $3 billion. This issue was priced at $85 per share, which was a 15% discount to where the stock had been trading on 22nd March ($100 per share). In addition to the fact that the new issue would dilute the existing shareholders’ value, commentary from Wall Street research firms that the company’s management itself does not think that the recent rally of the stock to $100 is justified, led to a sharp reversal in fortune. This led to the stock declining ever since, and the drop over the last three months comes to about 48%. Additionally, the equity swap fiasco at Archegos Capital Management led to the hedge fund selling 30 million shares of VIAC stock in an apparent move to liquidate the fund, thus exacerbating the fall inVIAC’s stock price. But will VIAC stock continue its downward trajectory over the coming weeks, or is a recovery in the stock more likely?

According to the Trefis Machine Learning Engine, which identifies trends in a company’s stock price data for the last ten years, returns for VIAC stock average little over 22% in the next one-month (21 trading days) period after experiencing a 48% drop over the previous six-month (126 trading days) period. The stock is likely to outperform the S&P500 over the next six months, with an expected return which would be almost 13.5% higher compared to the S&P500.

But how would these numbers change if you are interested in holding VIAC stock for a shorter or a longer time period? You can test the answer and many other combinations on the Trefis Machine Learning to test VIAC stock chances of a rise after a fall and vice versa. You can test the chance of recovery over different time intervals of a quarter, month, or even just one day! 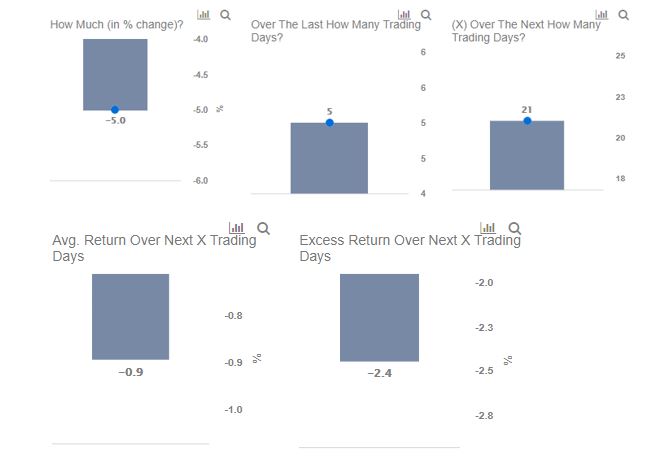 Question 1: Is the average return for ViacomCBS stock higher after a drop?

Case 1: ViacomCBS stock drops by -5% or more in a week

Case 2: ViacomCBS stock rises by 5% or more in a week

Is the average return for ViacomCBS stock higher over the subsequent month after Case 1 or Case 2?

Try the Trefis machine learning engine above to see for yourself how ViacomCBS stock is likely to behave after any specific gain or loss over a period.

If you buy and hold ViacomCBS stock, the expectation is over time the near-term fluctuations will cancel out, and the long-term positive trend will favor you – at least if the company is otherwise strong.

For VIAC stock, the returns over the next N days after a -5% change over the last five trading days is detailed in the table below, along with the returns for the S&P500:

The average return after a rise is generally lower than after a fall as detailed in the previous question. Interestingly, though, if a stock has gained over the last few days, you would do better to avoid short-term bets for most stocks – although VIAC stock appears to be an exception to this general observation.

VIAC’s returns over the next N days after a 5% change over the last five trading days is detailed in the table below, along with the returns for the S&P500:

It’s pretty powerful to test the trend for yourself for ViacomCBS stock by changing the inputs in the charts above.

We believe that the stock has been beaten down enough. The company’s focus on streaming and revival of traditional businesses as lockdowns are lifted and vaccine coverage increases will lead to a rise in VIAC stock in the near term.

Starbucks Stock Down 35% in 2022, Is There An Upside?
Visualize Related Companies:
Paramount Global , Walt Disney