Having gained more than 60% since the March 23 lows of last year, at the current price near $220 per share, we believe Visa’s stock (NYSE: V) is trading above its near-term potential. Visa, the largest global electronic payment solutions company in the world, has seen its stock increase from $136 to $220 off the March 2020 bottom compared to the S&P 500 which gained almost 85%. While the stock is behind the broader markets, it is trading 3% above its pre-Covid-19 peak in February 2020. This is because investors are cautious about lower cross-border transaction volumes due to the decline in travel. The cross-border transaction volumes directly impact the international transaction revenues, which contributed around 22% of the total revenues in 2020 – a drop from 27% in 2019.

Due to the impact of the Covid-19 crisis, Visa has suffered a 5% y-o-y drop in 2020 driven by lower cross-border volumes and a decline in the growth rate of payments volume & processed transactions on a year-on-year basis. While the company managed to outperform the consensus estimates of earnings and revenues in its first-quarter FY2021 results (FY Oct-Sept), the same trend dominated its revenues. It reported net revenues of $5.7 billion, which was 6% less than the previous year. This could be attributed to a 28% drop in international transaction revenues, partially offset by a 5% y-o-y growth in the services segment and a 6% increase in data processing revenues. Notably, client incentives as a % of revenues increased from 28.9% in the year-ago period to 32.7% in Q1.

The payments giant is very sensitive to changes in consumer spending levels. The consumer spending levels suffered in 2020 due to the impact of the Covid-19 crisis and the economic slowdown. That said, the spending levels have seen some recovery over the last six months of 2020, and are expected to further improve over the subsequent quarters, with improvement in the economy. This is likely to benefit the growth rate of data processing and services revenues. Further, its international transaction revenues were down last year due to the impact of the Covid-19 related travel restrictions, which are still there in most of the countries. However, as more and more people receive the Covid-19 vaccine, travel bans are likely to be lifted, benefiting the revenue stream. Overall, we expect Visa’s revenues to remain around $23.3 billion in FY2021 – up 7% y-o-y. Additionally, Visa’s P/E multiple changed from just below 34x in 2018 to close to 41x in 2020. While the company’s P/E is around 45x now, this leaves a little scope for downside when the current P/E is compared to levels seen in the past years – P/E multiple of around 41x at the end of 2020. Our dashboard “What Factors Drove 49% Change In Visa Stock Between 2018-End And Now?” provides the key numbers behind our thinking.

After a 56% gain since the March bottom, at the current price near $213 per share, we believe Visa’s stock (NYSE: V) has surpassed its near-term potential. V stock has increased from $136 to $213 off the recent bottom compared to the S&P 500 which increased almost 65%. While the stock has already crossed the level seen at the end of 2019, it is lagging the broader market. This is because investors are somewhat cautious about the drop in its revenues – the top-line has decreased 5% to a consolidated figure of $21.8 billion for FY 2020 (Oct – Sept), as compared to the figure of $22.97 billion a year ago. Similarly, the company reported per-share earnings of $4.40 for FY 2020, which was 8% lower than the year-ago figure.

Although Visa’s Q4 results were higher than the consensus estimates for earnings and revenues, its net revenues of $5.1 billion were 17% less than the previous year. This could be attributed to a 38% drop in international transaction revenues followed by a 13% drop in services revenues. The payments giant derives around 27% of its revenues from the international transactions segment, which has suffered the most due to lockdown restrictions and travel bans. Despite the recent improvement, the transaction volumes are likely to take some time to recover to the pre-Covid levels, limiting Visa’s scope of revenue growth. In addition, Visa’s P/E multiple changed from around 37x in 2017 to close to 32x in 2019. The company’s current P/E is 40x, which suggests a potential downside risk for the stock. Our dashboard What Factors Drove 106% Change In Visa Stock Between 2017 And Now? provides the key numbers behind our thinking.

After a 44% rise since March 23, at the current price of around $195 per share we believe Visa stock (NYSE: V) has reached its near term potential. Visa, the largest global electronic payment solutions company, has seen its stock rally from $136 to $195 off the recent bottom compared to the S&P which moved around 45%. The stock is in sync with the broader markets as investors are hopeful about improvement in Visa’s growth prospects due to an increase in consumer spending over the recent months. Notably, the stock market witnessed some negative movement since September 2nd due to a stint of profit-taking after a strong run – Visa’s stock is down 10%. Despite this, the stock is still up 14% from levels seen at the end of FY 2019 (Financial Year Oct-Sept).

Visa’s stock has almost reached the level it was at before the drop in February due to the coronavirus outbreak becoming a pandemic. However, in reality, demand and revenues will likely be lower than last year, which seems to make it fully valued.

Some of the rise over the last 2 years is justified by the roughly 25% growth seen in Visa’s revenue from FY 2017 to FY 2019, which translated into an 80% growth in Net Income figure. The unusually high growth in net income could be attributed to the effective tax rate of around 43% in FY 2017 due to the one time impact of the U.S Tax Act, which reduced the margin figure. However, the effective tax rates normalized in the subsequent years, improving the margin figure from 36.5% in 2017 to 52.6% in 2019.

While the company has seen high revenue growth over recent years, its P/E multiple has decreased. We believe the stock is unlikely to see a significant upside after the recent rally and the potential weakness from a recession-driven by the Covid outbreak. Our dashboard What Factors Drove 89% Change in Visa Stock between 2017 and now? has the underlying numbers. 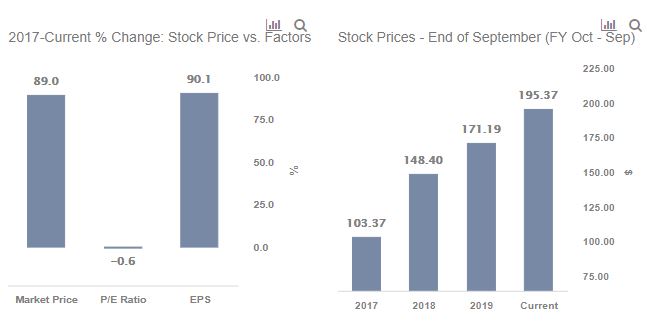 So what’s the likely trigger and timing for the downside?

Visa is the largest global electronic payment solutions company in the world, which provides a wide range of products and services to support the credit, debit, and related card solutions for institutions in over 200 countries. The company generates revenue by charging fees on transactions and payments volume. Due to the Covid-19 pandemic and the economic uncertainty consumer spending has dropped, negatively affecting the transaction volumes for the payments processing industry. Further, the lockdown restrictions coupled with the travel bans wreaked havoc on the international transaction volumes in the second quarter– the segment contributes 27% of the Visa’s top line. However, as the lockdown restrictions are eased in most of the world, it is likely to help consumer demand. This is also evident from the recently released consumer spending data which suggests an m-o-m growth of 8.5%, 5.6%, and 1.9% in May, June, and July respectively. Despite the recent improvement, the transaction volumes are still likely to be lower than the year-ago period. While the company reported a 17% drop in revenues for Q3 2020 due to higher client incentives and lower international transaction volumes, we believe that Visa’s Q4 results in October will further confirm the hit to its top line.

Further, over the coming weeks, we expect continued improvement in demand and subdued growth in the number of new Covid-19 cases in the U.S to buoy market expectations. Following the Fed stimulus — which helped to set a floor on fear — the market has been willing to “look through” the current weak period and take a longer-term view, with investors now mainly focusing their attention on 2021 results. Though market sentiment can be fickle, and evidence of a sustained uptick in new cases could spook investors once again.

Think Bitcoin could disrupt the banking industry? Looking for upside from Bitcoin adoption, without buying into the cryptocurrency itself? Check out our theme on Cryptocurrency Stocks

Better Bet Than V Stock: Pay Less Than Visa To Get More From S&P 500 Stocks TMUS, ABT, ABBV, AVGO, PFE

Visa vs. Crypto Stocks: Which Is A Better Investment?

What To Expect From Visa Stock?

Visa Stock To Report Strong Earnings In Q1, Is It A Buy?

Forecast Of The Day: Total Visa Cards In Circulation

Wex’s Stock Down 28% In The Last Month, What Is The Likelihood Of Rise?

Forecast Of The Day: Visa’s Payments Volume Per Card

At $232, Is Visa Stock Still Attractive?

Earnings Beat On The Cards For Visa?

There Are Better Alternatives To Visa Stock