United Technologies (NYSE:UTX) beat earnings, on the back of strong revenue from commercial aftermarket sales, and growth from its Pratt & Whitney division. With improved orders from commercial jet liner, and After Sales service being the key reason UTX beat earnings estimates. Earnings came in $1.93, up 29% from a year ago, while revenues came in at $18.03 billion, which is a 7.7% increase year on year. Earnings for the year came in at $7.61, adjusted, up 14% from the previous year. It should be noted earnings were improved largely due to changes to the tax regime.

We currently have a price estimate of $128 per share, which is higher than the market price. You can use our interactive dashboard, UTX 4Q 2018,  to modify key drivers and visualize the impact on the price estimate. 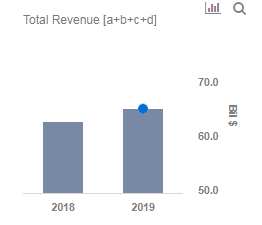 With the Rockwell Collins division now fully integrated, UTX should start seeing the full accretive value of this acquisition going into 2019. Both the Carrier and Otis division which grew by 6% for the year, are expected to have similar trends in 2019, on the back of global demand, and continued introduction of new products. 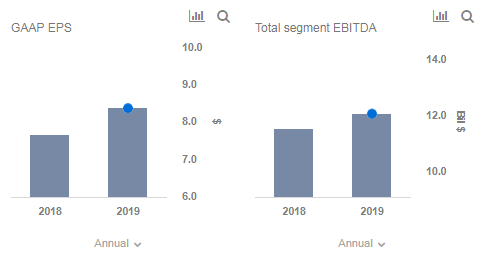 Pratt & Whitney GTF engines, with the best fuel efficiency among competitors, will see further production increases going into next year. This past year the production of the GTF engines doubled from their previous 2017 levels. With the market potentially being as large as $100 billion, we expect the Pratt & Whitney division to see significant gains with orders increasing in the coming year.  It should be noted sales were up 5% on an organic basis for the quarter, and 4% on a constant currency basis. The company has been facing increased orders from North America, but declines in Europe, and sales in the low single digits in China. With economic uncertainty, 2019 could see similar themes to 2018, as both Europe and China, have shown signs of economic weakness.

We continue to expect similar levels of growth going forward, and with our price estimate, we believe there is still some upside for the stock. The Pratt & Whitney division, along with the commercial division, we believe will be the main drivers for earnings in the upcoming quarters.

Why Has Gates Industrial Stock Rallied 40% Over The Last 3 Months?

What Can We Expect From United Technologies In Q3

What Will Drive United Tech’s Near Term Growth?

How Did United Technologies Perform In Q2?

How Did United Tech Perform In Q1?

What To Expect From United Tech’s Q1 Earnings

What To Expect From UTX’s Q4 Earnings

United Technologies: The Year In Review