Having gained more than 100% since the March 23 lows of last year, at the current price near $61 per share, we believe U.S. Bancorp’s stock (NYSE: USB) is trading above its near-term potential. The bank has seen its stock increase from $29 to $61 off the March 2020 bottom compared to the S&P 500 which rallied almost 90% – the stock is leading the broader market and has gained 30% YTD. The rally in USB stock could be attributed to two factors – first, the bank has posted better than expected profit figures over the last two quarters, thanks to the reduction in provisions for credit losses; second, the U.S. bank stocks have seen strong growth in FY2021 due to the approval of stimulus packages, an accelerated Covid-19 vaccination drive, and the Fed’s decision to maintain near-zero rates.

In the recently reported first-quarter FY2021 results, U.S. Bancorp reported revenues of $5.4 billion – 5% less than the year-ago period. The wholesale banking revenues dropped by 12% y-o-y followed by a 2% drop in the consumer banking business. Notably, the bank’s net interest income (NII) suffered a 5% drop in the quarter due to lower outstanding loan balances and a lower interest rate environment. Additionally, USB’s profitability figures received a big boost in Q1 due to a drop in provisions for credit losses from $993 million to -$827 million in the quarter. This improved the EPS figure from $0.72 to $1.45.

U.S. Bancorp’s revenues of $23.2 billion in 2020 were slightly above the 2019 figure. The company reported a 6% y-o-y increase in non-interest revenues, mainly driven by growth in commercial products and mortgage banking revenues. This growth was almost offset by lower NII, which suffered due to lower loan balances and interest rate headwinds. That said, we expect outstanding loan balances and card & payment services transaction volumes to see some recovery in the current year, with improvement in the economy. But, the interest rates are likely to suffer for some more time, hurting the NII. Overall, we expect the U.S. Bancorp’s revenues to remain around $22.9 billion in FY2021 – slightly below the 2020 figure. Additionally, U.S. Bancorp’s P/E multiple changed from 11x in 2018 to around 15x in 2020. While the company’s P/E is just below 20x now, there is a downside risk when the current P/E is compared to the previous years – P/E of around 15x at the end of 2019 and just above 14x in 2018. Our dashboard “What Factors Drove 33% Change In U.S. Bancorp Stock Between 2018-End And Now?” provides the key numbers behind our thinking.

After an 83% rally since the March 23 lows of the last year, at the current price near $53 per share, we believe U.S. Bancorp’s stock (NYSE: USB) is expensive. USB, a multi-state financial services holding company, has seen its stock increase from $29 to $53 off the recent March bottom compared to the S&P 500 which increased almost 75% – the stock is leading the broader market and has gained 4% over the last twelve months. The investors were somewhat cautious about the impact of higher loan default risk on the Bank’s bottom line. However, USB reported better than expected profit figures in the fourth-quarter of 2020 due to a drop in provisions for credit losses on a sequential basis, which boosted investor confidence in the stock.

While U.S. Bancorp outperformed the earnings estimates in its recently released fourth-quarter results, its revenues were slightly below the mark. It reported total revenues of $5.7 billion – 1% more than the year-ago period. Its wholesale banking revenues dropped by 3% y-o-y followed by a 9% drop in payments service and a 7% decline in the wealth management segment. However, 11% growth in the consumer banking division was able to tilt the scale in the favor of positive growth. Similarly, USB’s full-year 2020 revenues grew 1.5% y-o-y to $23.2 billion, mainly due to a 6% growth in non-interest income, partially offset by a 2% drop in net interest income due to interest rate headwinds.

Due to the Covid-19 crisis and economic slowdown, businesses and individuals have suffered losses, leading to lower consumer demand and higher loan default risk. Further, the Federal Reserve has introduced a zero-rate policy in response to the Covid-19. It has put the lending industry under pressure as it reduces the net interest spread. That said, as the economy moves towards normalcy, consumer demand is likely to recover. Further, the loan default risk is likely to decrease with the improvement in the financial health of USB’s customers, leading to a favorable drop in provisions for credit losses. However, the lower interest rate environment is unlikely to see an immediate revival. Overall, U.S. Bancorp revenues are expected to suffer in the short term. Additionally, U.S. Bancorp’s P/E multiple changed from 11x in 2018 to around 15x in 2020. While the company’s P/E is close to 17x now, there is a downside risk when the current P/E is compared to the previous years – P/E of around 15x at the end of 2019 and just above 14x in 2018. Our dashboard “What Factors Drove 16% Change In U.S. Bancorp Stock Between 2018-End And Now?” provides the key numbers behind our thinking.

USB’s stock has partially reached the level it was at before the drop in February due to the coronavirus pandemic. After the healthy rise since the March 23 lows, we feel that the company’s stock still has potential, as its valuation implies it has further to go.

Some of this rise of the last 3 years is justified by the roughly 8% growth seen in U.S. Bancorp’s revenues over 2016 to 2019, which translated into a 18% increase in Net Income. Although the expenses as a % of revenues saw a marginal increase over 2016-2019, a lower effective tax rate due to the enactment of the U.S Tax Act helped the net income figure.

While the company has seen steady revenue and earnings growth over recent years, its PE multiple has marginally decreased.  We believe the stock is likely to see some upside despite the recent rally and the potential weakness from a recession driven by the Covid outbreak. Our dashboard Why U.S. Bancorp Stock moved 24% between 2016 and 2019 has the underlying numbers.

So what’s the likely trigger and timing for further upside?

U.S Bancorp has a sizable loan portfolio of consumer and commercial loans. Further, the wholesale, cards and payments, and consumer banking segments together generated around 81% of the bank revenues in 2019, which implies that the bank is heavily dependent on the three segments. On the other hand, businesses could likely suffer losses due to the combined effect of lower consumer demand, supply chain disruption, and global economic slowdown. This could impact the loan repayment capacity of its customers, exposing the bank to the possibility of sizable losses. Further, as the economic condition deteriorates, it would become expensive for the bank to attract funding, negatively impacting all its operations. While the company’s results for Q1 showed positive growth, we believe that Q2 results will confirm this reality with a drop in revenues across all the segments. It is also likely to accompany a lower Q3 as-well-as 2020 guidance.

However, following the Fed stimulus — which set a floor on fear — the market has been willing to “look through” the current weak period and take a longer term view — where the valuations vs historic valuations become important in finding value.

That said, if there isn’t clear evidence of containment of the virus over the next couple of months, or if there is a second wave of infections in the country, the stock could potentially see another dip. Under such a scenario, the P/E multiple could decline even as the earnings forecast for the current year is revised lower again.

Our dashboard forecasting US Covid-19 cases with cross-country comparisons analyzes expected recovery time-frames and possible spread of the virus. Further, our dashboard -28% Coronavirus crash vs. 4 Historic crashes builds a more complete macro picture. It complements our analyses of Coronavirus impact on a diverse set of U.S Bancorp’s peers. The complete set of coronavirus impact and timing analyses is available here.

Think Bitcoin could disrupt the banking industry? Looking for upside from Bitcoin adoption, without buying into the cryptocurrency itself? You can find more about our theme on Cryptocurrency Stocks here. 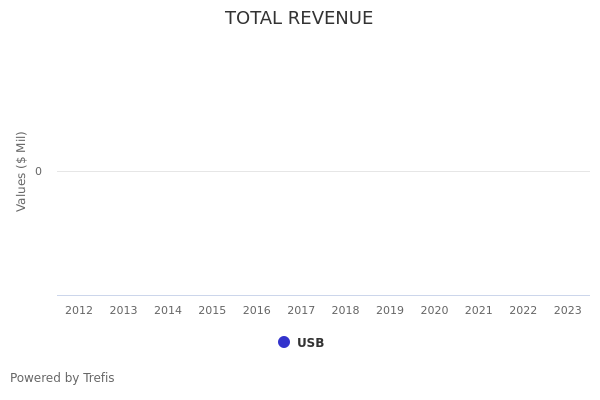 U.S. Bancorp Stock Outperformed S&P500 Over One Month, Is It A Buy?

U.S. Bancorp Stock To Top The Consensus In Q2

Despite 56% Gains Since March, U.S Bancorp Stock Can Still Grow

U.S. Bancorp Has Rallied 36%, What To Expect Next?

Coronavirus Recovery Watch: Major U.S. Banks Underperform The Market, But There Are A Few Bright Spots