The shares of United Airlines (NASDAQ: UAL) have trended downward due to fears of low air travel demand in the fourth quarter. While the ongoing surge in coronavirus cases due to the delta variant is likely to cause near-term uncertainty, long-term trends look favorable for the stock. As highlighted in our earlier article, United Airlines’ 270 plane order is likely to assist in revenue and margin expansion. Interestingly, the third round of payroll support will support employee salaries through September 30, and passenger numbers at TSA checkpoints have not observed a sharp decline. Also, air travel demand surged during the second quarter as restriction measures were eased – pinning hopes for a similar trajectory after the current surge. Trefis highlights the key factors driving United Airlines’ Valuation including revenues, margins, valuation multiple, and competitive comparison with peers in an interactive dashboard analysis. 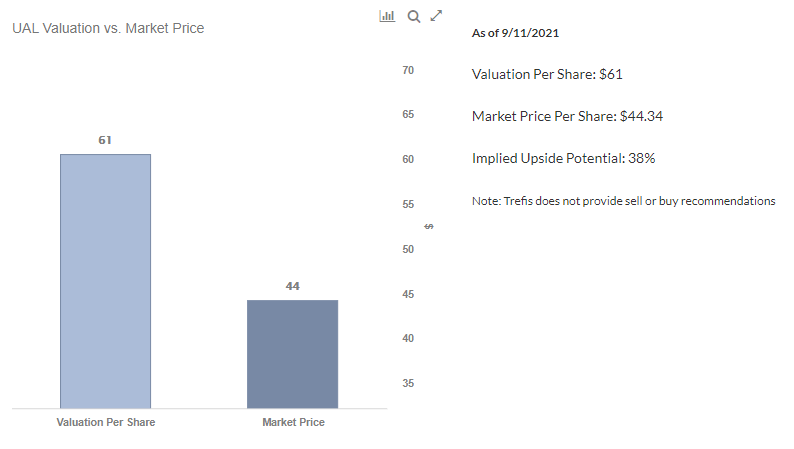 In a recent move, United Airlines (NASDAQ: UAL) announced a 270-plane order of Boeing 737 Max and Airbus A320s to replace its older regional and mainline aircraft. The new fleet will be 11% more energy efficient and lower carbon emission per seat by 15-20%. Along with better customer experience and a spacious cabin, the company is adding newer destinations and more aircraft options between various U.S. cities. Per Boeing’s commercial market outlook, the passenger air travel market is expected to grow at a single-digit rate in the next twenty years with new orders mainly driven by aircraft replacements. Apart from the earlier provided guidance of complete revenue and EBITDA recovery by 2023, United Airlines’ revenues are likely to observe strong growth post-2023 as new planes are added to the fleet. We highlight the key divisions of United Airlines’ revenues in an interactive dashboard analysis.

Per annual filings, United Airlines’ fleet comprises 812 mainline and 475 regional aircraft. The mainline primarily consists of 136 737-900ER and 141 737-800 aircraft types. The regional fleet is made up of 190 Embraer and 133 CRJ 200. The recently released aircraft retiral program mostly includes smaller mainline jets and 200 regional jets to be replaced over the next couple of years. With 500 new airplanes in the order book, 40% of United’s fleet will be comprised of newer aircraft – leading to substantial fuel savings and margin expansion.

United Airlines’ revenues increased by 14% from $38 billion in 2017 to $43 billion in 2019, driven by rising capacity and ticket prices. Revenues are likely to continue the growth trajectory in the post-pandemic period as occupancy rates improve. Notably, passenger numbers at TSA checkpoints have reached almost 20% below 2019 figures assisted by recovering travel and the tourism sector. Also, the third round of payroll support requires airlines to suspend dividends and share repurchases until September 2022 – highlighting the requirement of strong cash generation to reinstate shareholder returns.

What to expect for United Airlines Holdings stock, one day after earnings?

United Airlines Holdings During 2008 Recession vs. Now: UAL Stock Has 126% Upside If It Recovers To Pre-Covid Levels